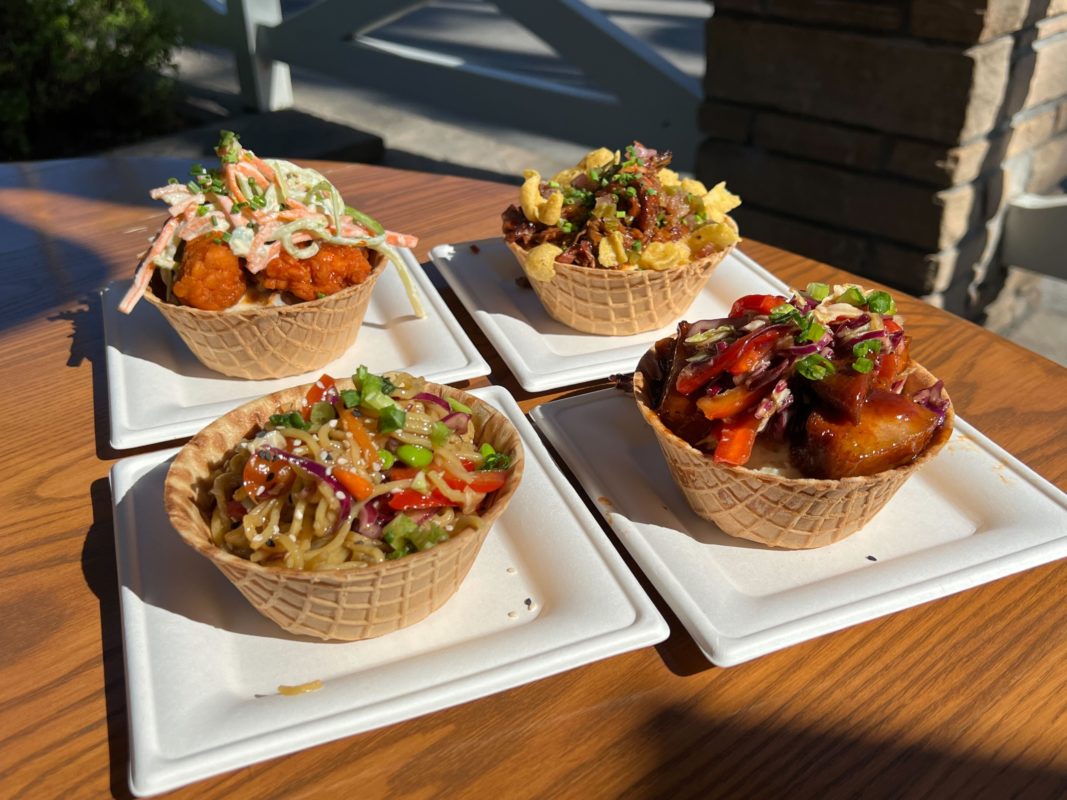 The brisket in here is so sweet; it’s almost off putting. It tastes as though they used too much ketchup or the sauce is too heavy on the sugar.

The bowl is very heavy with the potatoes, cheese, and brisket — both in the nature of the dish and the literal weight. All in one bite, it’s a lot. It’s so rich, and the queso makes it dairy heavy.

This was a good attempt, but too much going on. The waffle bowls are the same for all four dishes, and they are the typical ice cream sundae waffle bowl. They were not good with any of the dishes, and we do not recommend eating them.

There is a decent amount of pork belly here, and the toppings make up about half of the bowl. The pork belly is just okay, and it’s a little tough.

The overwhelming sweetness from the sauce and saltiness from the potatoes makes this another rich dish. The veggies are crunchy, and there is more than enough sauce to go around.

The flavors are not bad; it’s just very sweet. But it’s seasoned well, and you can get the tang underneath it all.

There are four buffalo chicken pieces, and a ton of carrots and celery strings on the top “coleslaw.” The chicken is white meat boneless nuggets, and the buffalo sauce definitely has kick. It hits almost immediately. The coleslaw here is reminiscent of the carrots and celery you dip and ranch when you get wings.

When you eat the mashed potatoes with the coleslaw, it’s not a terrible bite, but it tastes more like a potato salad. Weirdly, it works. Despite the size of this bowl, it would fill you up pretty quickly.

While this bowl held up to the weight of the mashed potatoes and chicken, the other bowls did not.

The mashed potatoes served with the meat-based waffle bowls are well salted and seasoned. You get the butter, salt, and pepper, but we really like that there are some skins here. It adds a sense of freshness over what you get from powdered box mix potatoes.

This is just ok also. It doesn’t have mashed potatoes, which was a relief after trying the other three. It’s a chilled noodle salad with similar flavors as the Korean bowl.

There is a lot less sweetness here in the yakisoba sauce. The veggies are crunchy, and the seasonings are good. This is a decent option taste-wise, but for $12.99, we’d like something more filling.

These are cute and fun waffle bowls. Other guests kept stopping to ask us about them when we were taking photos. We wish their execution matched their cuteness. They’re very heavy, and some are way too sweet. Our favorite of the four probably was the buffalo, with an honorable mention for the plant-based. These are also pretty pricy for the size you get, and while the bowl is edible, it’s not particularly “eatable” with any of these dishes. We recommend grabbing the chicken salad sandwich from Woody’s Lunch Box or a Ronto Wrap over any of these.

RUMOR: Staffing Points to Reopening of the Walt Disney World Railroad Before Christmas 2022