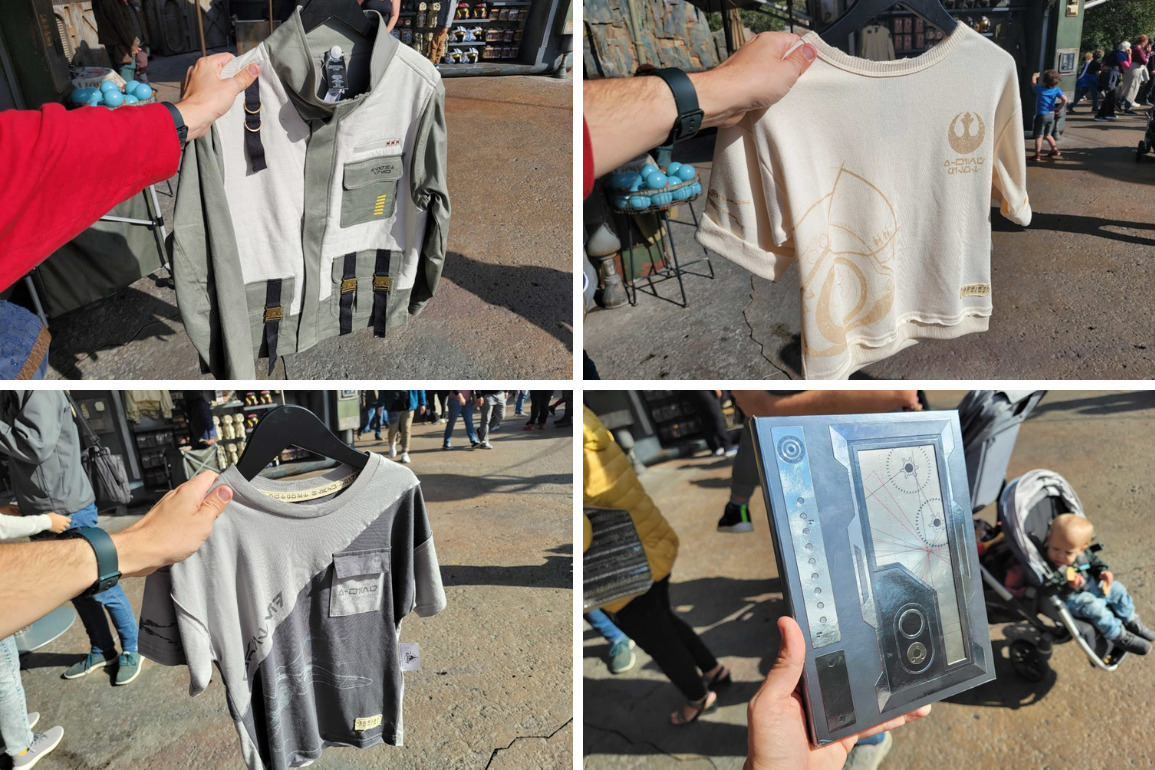 For every Resistance fighter, the battle against the First Order takes time, energy, and supplies. The Resistance Supply store in Star Wars: Galaxy’s Edge at Disneyland Park offers what every operative needs. After a run-in with the Mandalorian, we spotted some new X-wing pilot apparel and a notebook.

Before you embark on your mission, this starfighter jacket offers comfort and a stylish Star Wars look. Any of your partners within the resistance will recognize you in this jacket. They might even notice the number of enemies you have defeated also.

This jacket features a pocket design. Right above the pocket are three crossed-out TIE fighters, indicating your status as an accomplished fighter. There are yellow stripes on the pocket, and the flap reads, “Flight Crew” in Aurebesh, the primary script of the Star Wars universe.

The back of this jacket also reads “Flight Crew.”

The straps on this jacket have metal latches that complete the starfighter look. With this, you look prepared to take on a whole First Order fleet.

Resistance Supply offers a jacket for the starfighter in training also. This youth-size jacket looks similar in many ways to the adult version. The pockets are located in a different spot on the front of this jacket though. The same color scheme can be seen as well as a zipper in the middle with a Velcro-style covering.

Upon closer examination of the place where the pocket was on the adult jacket, we see the symbol showing our loyalty in this battle between good and evil. It also reads “Flight Crew.”

The youth jacket gets even more specific, designating the wearer as an X-wing pilot.

The other pocket shows the same three crossed-out TIE fighters.

To go with your jacket, Resistance Supply also sells youth “Resist” shirts. This light-colored shirt displays the symbol of resistance in the top corner, and an “X-wing Pilot” designation. Watch out for Stormtroopers when wearing this.

A tag on the bottom of the shirt reads “Resist” in both English and Aurebesh.

The Black Spire Outpost logo is on the right side of the back, while the left side reads “Resistance.”

If looking for a bit more contrast in color, this shirt might fit your plans. Though the colors are still understated, they show a little more to catch the eye. An X-Wing fighter features prominently on the front. This shirt has a pocket with a closure also.

The pocket reads “x-Wing” in Aurebesh with the resistance Starbird on the closure of the pocket.

On the bottom corner, we see the word “resist” in two languages like the previous shirt.

On the back, a readout of some X-wing stats runs down the bottom beside “Resistance.” The Black Spire Outpost logo is on the center of the top.

All good fighter pilots need a way to write down their thoughts. Resistance Supply sells an X-wing themed notebook. The outside is designed like a traditional datapad.

The back of the notebook continues with this dark background and a darker shadow of the Resistance symbol.

Inside are blueprint-style graphics of gears and an X-wing ship.

Will you be showing off your rank as an X-wing pilot with any of the new merchandise? Let us know in the comments below.