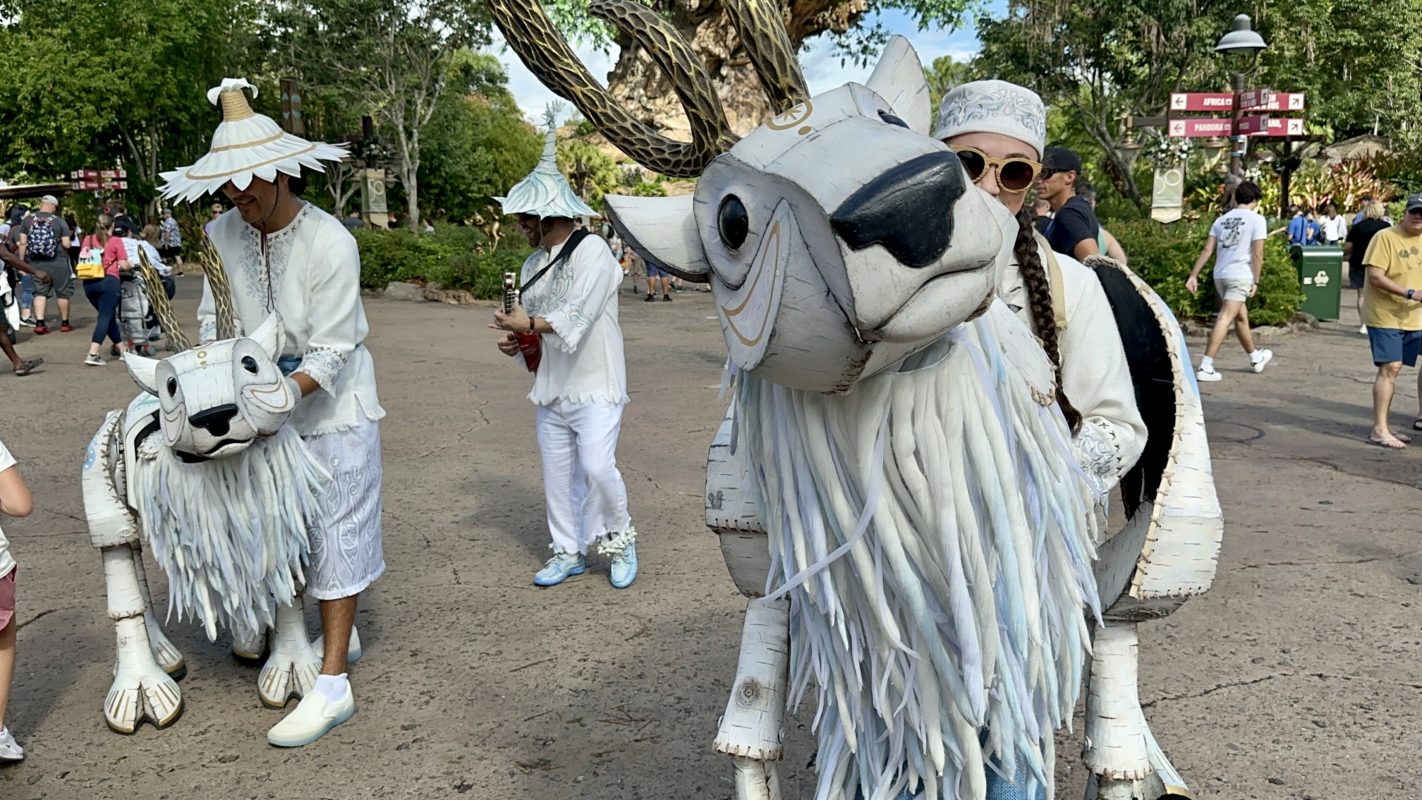 Season’s greetings from Disney’s Animal Kingdom! Today is the official start of the holidays here at Walt Disney World. We have a fun day planned checking out holiday decorations, seeing the Merry Menagerie, and watching the Santa Claus flotilla. Let’s get started.

Disney’s Animal Kingdom Christmas tree was not up when we arrived at the park this morning. We did spot some Christmas decorations all around the park including these wreaths and garland at the front entrance.

A holiday photo op has arrived in the front of Disney’s Animal Kingdom. PhotoPass photographers were out taking pictures for guests.

Decorative garland was hung all along the entrance to Disney’s Animal Kingdom.

In addition to the Merry Menagerie themed decorations, there was also decorative garland hung all around the store fronts.

Inside the stores were also decorated for the holidays.

A hoodie and sweatpants set has also arrived. This tie dye hoodie features Judy Hopps and Nick Wilde from “Zootopia.”

There was also a Yax T-shirt and pet shirt available.

Some new ornaments have arrived at Disney’s Animal Kingdom. We spotted these ornaments in Discovery Trading Company. The first ornament is an “Alice in Wonderland” dome Sketchbook ornament.

There was also a Sketchbook ornament featuring Ariel, Flounder, and Sebastian from “The Little Mermaid.”

Phone cases have arrived in time for the holidays. We spotted this “Season’s Greetings,” phone case featuring Mickey and friends decorating a Christmas tree.

As we entered Dinoland U.S.A. we noticed the Brachiosaurus dinosaur was decorated with Christmas lights. We can’t wait to see it at night.

We also spotted Christmas decorations all around Dinoland U.S.A., including garlands and a wreath on the “World’s Largest Pin Truck.”

The golden Christmas tree popcorn bucket has returned to Walt Disney World for the holidays.

There is a new grape soda fashion T-shirt for women. This T-shirt features the grape soda cap from “Up.”

We also spotted this T-shirt featuring “The Aristocats.”

Wall art featuring Jack Skellington, Sally, Mayor and Barrel from “The Nightmare Before Christmas,” has arrived.

Today was the first day the show returned. We loved watching the puppets interact with guests.

The seal was a little shy at first but was so happy to say hello to everyone!

These adorable little penguins were running all around the walkways and we couldn’t get over how cute they looked.

The caribou were so curious and wanted some pets.

Donald and Daisy were dressed up in their holiday outfits in Dinoland U.S.A.