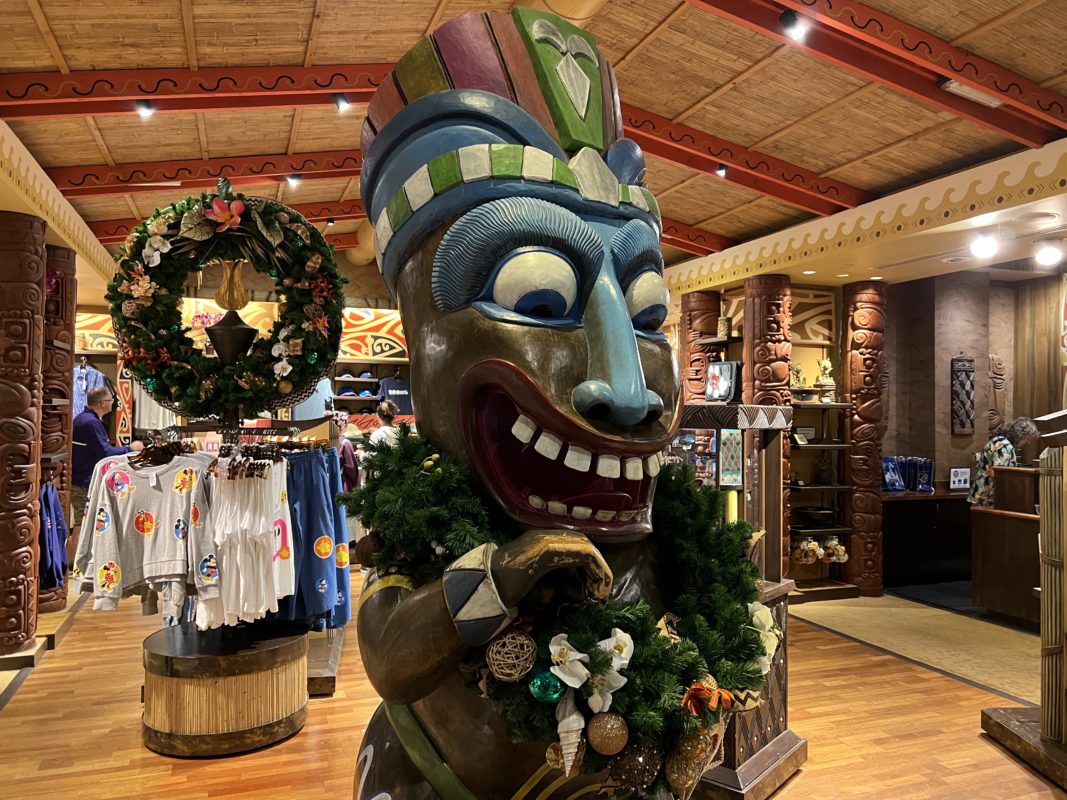 Good morning from a beautiful day at Magic Kingdom! It’s a pretty chilly sunny day so let’s warm up and get started on our walk around the park.

As we made our way to the park, we noticed a few new blue Walt Disney World road signs that replaced the classic red and purple. One of the signs near the ones we found replaced last week by Disney’s Animal Kingdom point to Disney’s Hollywood Studios and ESPN Wide World of Sports.

The other set we found are just off of World Drive as you head to EPCOT or Disney Springs.

We stopped in at Disney’s Polynesian Village Resort before heading to the park and saw their Christmas tree and more holiday decor is now up in the lobby and near Ohana. Find tropical fish and woven stars hiding in this bright tree.

Even the BouTiki Tikis had their own garlands!

Just after tapping in, we looked up to see the Walter E. Disney Walt Disney World Railroad train in the station! The train has been testing often this week now that the tracks just past the TRON tunnel are now complete.

Once we were inside the park, we stopped at the Emporium as always to see what new merchandise we can find. A cozy looking set of holiday socks feature the popular pairs of Mickey & Minnie and Chip ‘n’ Dale on red and green stripes. These socks are $21.99.

Santa Grogu?! This adorable Grogu hat has long ears and a sweater brim. “Star Wars” reads in candy cane stripes below. The hat is $29.99.

A set of four colorful bauble ornaments are available in the seasonal section of the Emporium. Minnie and Mickey and smaller festive ornaments are on red, gold and green ornaments for $34.99.

Avengers “Assemble” on this new black MARVEL hat near the back of the Emporium for $29.99.

Brick pavers have finally been added to Center Street just after the curbs were poured this week. Hopefully this means it will be done soon!

Inside Uptown Jewelers, two new necklaces and two new bracelets are on the shelves. One necklace features a castle, Minnie Mouse, and a Mickey Mouse cone for $24.99. A princess crown choker necklace has colorful gems and if $29.99.

Two new pairs of earrings have dangling princess icons for $24.99 and a similar hoop pair for $19.99. Cinderella’s shoe, Mulan’s fan, and Ariel’s seashells can be seen on these.

It’s PeopleMover time! We looked over the construction site at TRON for any new progress down below. A new piece of theming was lit up and added to the entrance archway this week.

We spotted the train again filling up at the station in Storybook Circus. It backed into the station, moved forward and backed up again before we set off.

Splash Mountain was down for most of the day today, although we feel like it wouldn’t have had a very long line anyway. Usually when the temperature drops, guests are less likely to want to get wet.

As we made our way out of the park, we stopped by Walt Disney’s Enchanted Tiki Room to see the newly refurbished sign. A portion of the flowers along the bottom were missing and the red is more vibrant today.
Thanks for following along today!

Flowers Added to Journey of Water Inspired by ‘Moana’ at EPCOT