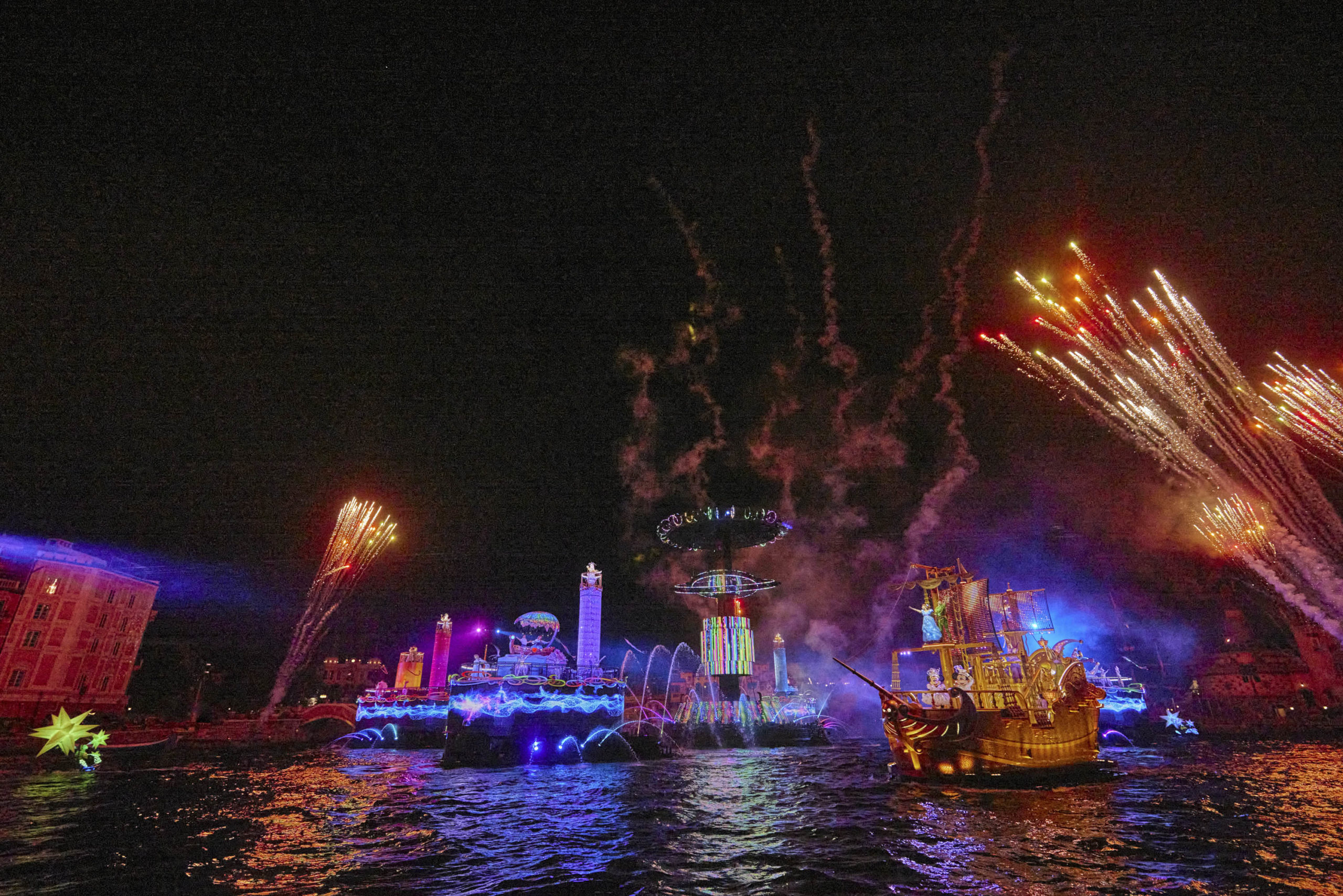 After nearly three years without a nighttime show, the triumphant return of Tokyo Disney Resort’s entertainment has been realized in the new “Believe! Sea of Dreams” nighttime show, which officially debuts later this week. The new show replaces Fantasmic!, which ran from 2011 to 2020. We were on hand for a preview performance, so come take a journey across the Sea of Dreams with us.

You can watch the full show with the new Hotel MiraCosta projections via the link above.

Peter Pan, Wendy, and the Lost Boys sail out to kick off the show on a giant, glimmering pirate ship.

They’re here to guide us through the Sea of Dreams, where the show takes place.

As the show begins, we’re introduced to four of the core characters featured in the show. Moana is on a large barge which was lit with her ship and Polynesian-esque waves.

Rapunzel is on another barge. The base is lit to depict the kingdom of Corona, complete with floating lanterns.

The character platforms encircle the center barge as the show’s theme, “Every Wish Deserves a Dream” plays.

Miguel from “Coco” is on another platform, which is decorated with papel picado.

Glowing stars are driven around on small jet skis. Pyrotechnics are launched from around the center barge, and the large character barges have fountains on the base.

The center barge has a tall tower with many lighting effects.

The facade of Tokyo DisneySea Hotel MiraCosta is used to extend the show via projections.

The use of the hotel truly immerses guests on both sides of the harbor in the show.

The first segment stars Aladdin, with “Arabian Nights” kicking off the show.

Genie is seen on a screen on the center barge.

That is, before he appears on the barge with Aladdin.

The Cave of Wonders appears on the center barge screen as Aladdin journeys inside.

“Neon” animations of Genie and Abu are seen as multiple remixes of “Friend Like Me” play, including in rap and chiptune.

Graffiti-style art colors the barges for “Friend Like Me.”

The harbor transforms into Agrabah.

More neon-esque scenes are projected onto the buildings as well.

The hotel also becomes Genie (or does Genie become the hotel?).

Rapunzel appears in her tower on the center barge before rappelling her way down with her hair, kicking off the show with “When Will My Life Begin?”

The harbor becomes the kingdom of Corona and is adorned with golden suns as riffs of “I See the Light” play.

For the “Coco” segment, Miguel plays his guitar on the barge’s top platform while alebrije and skeleton dancers perform on the main platform. He has some stage fright at first, but quickly gets over it.

Art of skulls and maracas dance on the barge and harbor as “Un Poco Loco” fills the harbor.

The alebrije and skeleton dancers have bold neon costumes and elaborate masks.

Fireworks burst from the base of the barges.

The skull art is overtaken by papel picado, some of which depict characters from the film, such as Miguel, Dante, and Héctor.

The line of barges “connects” with fountains to become the marigold bridge to the land of the dead.

This segment is mostly dominated by Ursula from “The Little Mermaid.” We do hear Ariel vocalizing before the sea witch takes over with “Poor Unfortunate Souls.”

The barges and lighting turn ghastly green when Ariel signs away her voice.

Fortunately, things turn out well for our little mermaid, and it conveniently segues right into the next show segment.

For the “romance” portion, the princess and princes appear together. Ariel and Prince Eric join in with a platform that resembles a clamshell.

The base of the barge is lit to look like stained glass.

Rapunzel and Flynn appear on a platform with golden sun fencing, surrounded by lanterns.

They light one to let go for the festival.

Aladdin and Jasmine ride the flying carpet under the crescent moon.

Each platform features dancers in floral costumes, and their respective songs transition between each other. We hear “I See the Light,” “Kiss the Girl,” and “A Whole New World.”

Lanterns are on the barges and are towed by jet skis, but now there are more than just the suns of Corona on them. Some of the lanterns feature the magic lamp or a seashell.

Vines overtake the harbor as they prepare to finally kiss.

Projections show Ariel and Eric in the boat from the “Kiss the Girl” scene.

Everything becomes alight in tones of warm oranges and yellows while the harbor projections fill the “sky” with lanterns.

Maui and Moana are on the barge screens during the tense showdown with Te Kā.

From the quiet, Moana sails in on her canoe (atop a barge). She and Maui have an argument over whether she can stop Te Kᾱ’s wrath.

She holds the heart of Te Fiti before Te Kā.

Gramma Tala’s manta ray form swims across the harbor as she sings “Song of the Ancestors.”

Elsa overtakes the barges with icy blues, fighting against the waters.

Elsa rides the Nokk across the screen.

Te Kā spreads lava and fire across the water. We hear conflicting choruses of “Show Yourself” and “Know Who You Are” from Elsa and Moana, respectively, as the two fight to control Te Kā and prevent her wrath.

The two win out in the end, restoring Te Fiti. After, we see the main characters of each film represented so far on each of the four screen barges.

The Fab Five join the other characters for the finale. Daisy Duck dons a dazzling outfit on the barge with Ariel and Eric.

Pluto, with a sparkling hat and wand, is on the platform with Moana.

Aladdin and Jasmine are joined by Goofy.

On the ship with Peter Pan and Wendy are Mickey and Minnie Mouse.

Their light up costumes are bright and elaborate, very similar to the Tokyo DisneySea 20th Anniversary costumes we saw last year. The delightful chorus of “Every Wish Deserves a Dream” returns in this climactic finale.

Rapunzel and Flynn are joined by Donald Duck.

The large stars return in multicolor.

The finale is colorful with many effects, including pyrotechnics and fountains.

Following the show, the barges sail around as the Japanese version of the song plays. The characters dance and wave at guests around the harbor before the lights finally return.