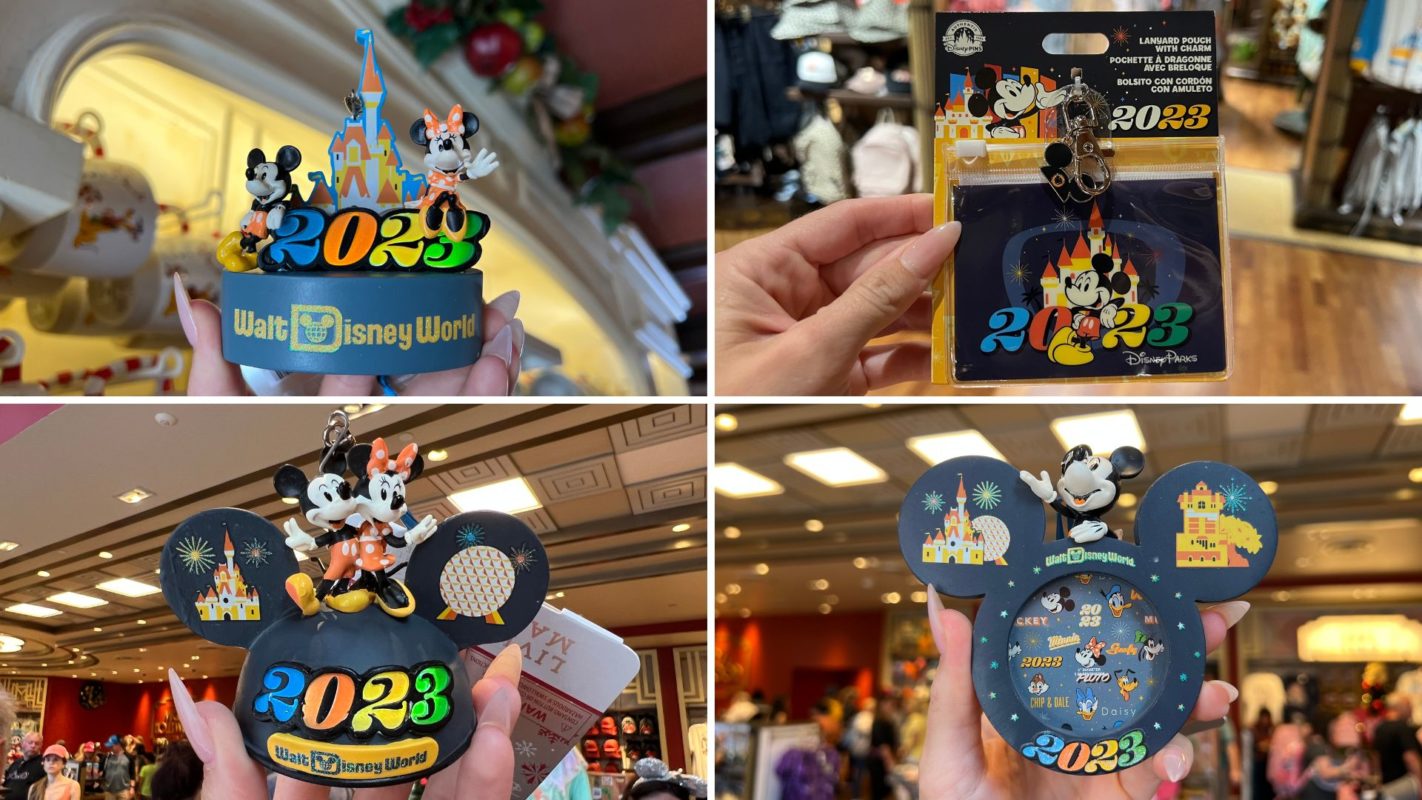 Celebrate the new year with some 2023 ornaments on your Christmas tree. These new ornaments, plus 2023 lanyard pouch, are available throughout Walt Disney World Resort.

The pouch has a dark blue front. Mickey lounges between the colorful numbers of “2023” in front of a yellow and red image of a castle. It’s not a specific castle so it can also be sold at Disneyland Resort.

We found the lanyard pouch in BouTiki at Disney’s Polynesian Village Resort.

This ornament comes with a blue ribbon that’s detachable so you can display it as a frame year-round, too.

The frame is Mickey-shaped, with Cinderella Castle and Spaceship Earth on one ear and The Twilight Zone Tower of Terror and the Tree of Life on the other.

A Mickey figure is popping out between the ears. “2023” is in sparkly letters at the bottom. If you don’t have a photo to put in the frame, it displays the year with among pictures of Mickey’s friends.

A small stand is on the back.

This ornament and the two below were in Mickey’s of Hollywood at Disney’s Hollywood Studios.

This ornament is shaped like a Mickey ear hat, with a flat bottom and two ears on top.

Mickey and Minnie stand atop the ear hat. “2023” and “Walt Disney World” are on the front.

The different park icons are on the fronts and backs of the ears. Donald, Goofy, Daisy, Pluto, Chip, and Dale are on the back of the hat.

The switch and battery compartment are on the bottom.

This blue-silver ornament is shaped like a Mickey head, also with Mickey and Minnie standing on top.

Cinderella Castle, Spaceship Earth, The Twilight Zone Tower of Terror, and Tree of Life are rising behind the sparkling numbers of “2023.”

“Walt Disney World” is below the year.

The ears are decorated with fireworks.

More character faces are on the back.

We found this final ornament in Ye Olde Christmas at Magic Kingdom.

It has a dark blue base with “Walt Disney World” across the front. Cinderella Castle rises from the base, behind “2023.”

Mickey and Minnie are on the sculpted figure of the year.

It also lights up with a switch on the bottom.