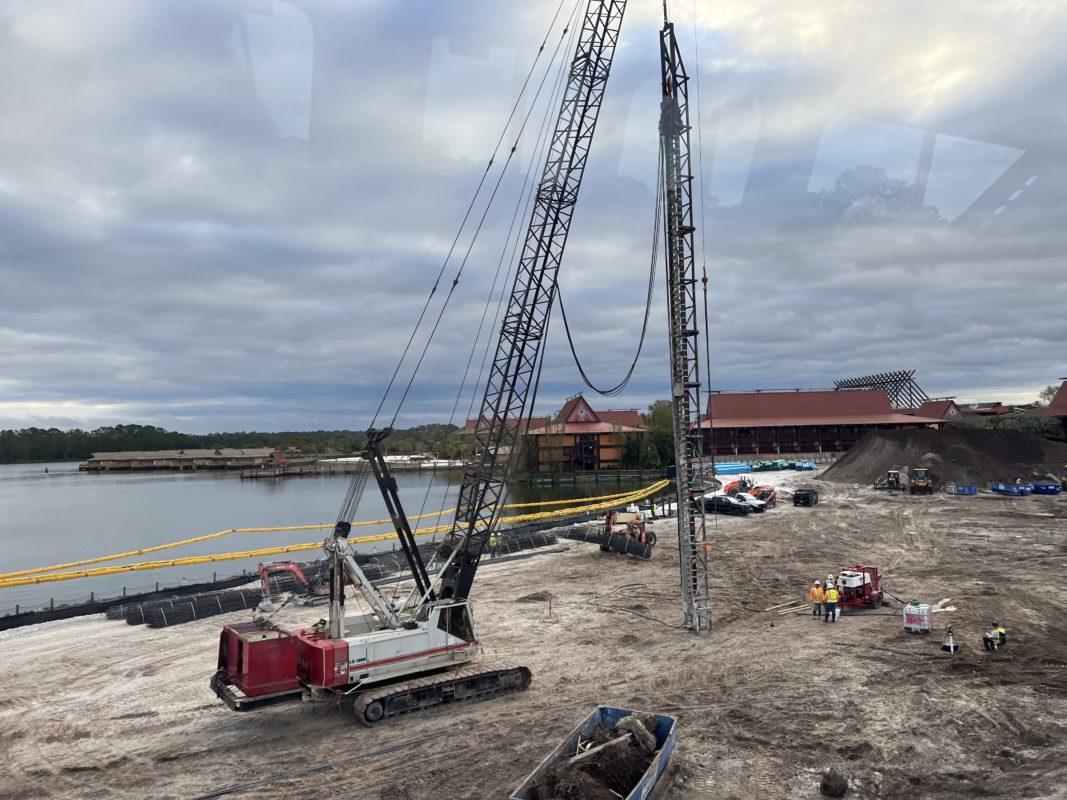 Following the demolition of the Spirit of Aloha building, Disney is constructing a new Disney Vacation Club wing at Disney’s Polynesian Village Resort. Foundation work has begun on the new building and dirt piles have been moved around the construction site.

Construction is taking place right next to another Polynesian building, with a tarp-covered fence separating the two.

Several trucks and two construction vehicles were parked at the far end of the construction site when we recently rode by on the Monorail.

Caution tape outlines trenches dug into the ground. A line of concrete barriers cuts into the site.

There are multiple diggers at the site carving out the trenches.

There are also several large piles of dirt.

We saw one digger working on a pile.

A steel archway has been installed where vehicles enter and exit the construction site.

A few blue dumpsters sit next to the dirt piles for extraneous rubble.

More concrete barriers are staged for later use.

This scaffolding archway has been on the construction site for several months.

This tall equipment is a pile driver for the installation of foundational pilings.

Pilings are often used for foundations, especially in areas where the water table is high. Florida’s water table is particularly high, so this is a common practice in construction here.

The yellow barriers just past the shoreline are known as turbidity curtains. They are typically weighted at the bottom to hinder sediments from entering the Seven Seas Lagoon.

A portion of the beach is closed during construction.

Florida Judge Voids CDC Mask Mandate for TransportationApril 18, 2022
Take Art for a Ride With the Return of Spin Art to the 2023 EPCOT International Festival of the ArtsJanuary 14, 2023
Daisy Duck Now Meeting Near Guardians of the Galaxy: Cosmic Rewind at EPCOTFebruary 13, 2022

Construction of Summer House on the Lake Visible at Disney Springs