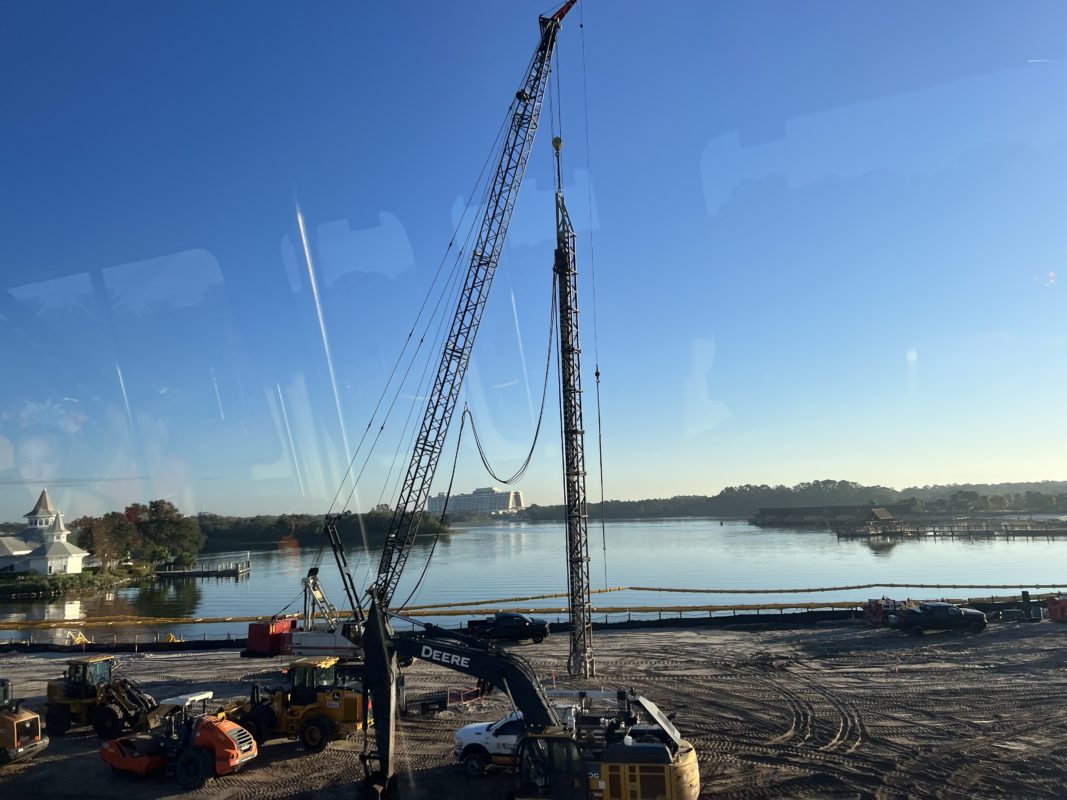 Enjoying a ride on the “Highway in the Sky,” we checked out how construction was progressing on Disney’s Polynesian Village Resort’s vacation club wing.

This past spring, when Disney announced the Spirit of Aloha Dinner Show would permanently close, many fans were not happy. Some were even less than thrilled when they found out a new multi-level Disney Vacation Club Wing would rise in its place.

As we reported last week, we can still see dirt piles surrounding the construction site.

However, instead of an area filled with backhoes and bulldozers, we can now see the addition of a construction crane (upper left corner) in the distance.

Here are more piles of dirt, along with wooden post markers and what looks like some existing rubble.

A large, blue container is next to one of the dirt piles taking the remaining refuse from the construction site.

Concrete barriers are marking out a square area in the dirt.

The tall equipment on the left is a pile driver for the installation of foundational pilings. Pilings are often used for foundations, especially in areas where the water table is high. Florida’s water table is particularly high, so this is a common practice in construction here.

As we head towards Disney’s Grand Floridian Resort & Spa, we can see those familiar yellow barriers just past the shoreline. Those barriers are commonly known as turbidity curtains. They are typically weighted at the bottom to hinder sediments from entering the Seven Seas Lagoon.

“It’s no secret that our Members and Guests love the monorail resorts at Walt Disney World,” said Bill Diercksen, senior vice president and general manager of Disney Vacation Club. “Expanding our Disney Vacation Club offerings at the Polynesian would give our Members and Guests yet another incredible option for staying close to the magic while making vacation memories that last a lifetime.”

The Spirit of Aloha dinner show closed in March 2020 alongside the rest of Walt Disney World Resort during the onset of the coronavirus pandemic. While most operations have returned to normal, the show was among those that never reopened. It was likely slated to close for the DVC wing anyway, but the guests and performers were unable to enjoy a final performance due to the safety precautions.

Check out our other coverage on Disney’s Polynesian Village Resort’s upcoming DVC property:

Are you excited for this new addition to the Disney Vacation Club portfolio? Let us know in the comments below.