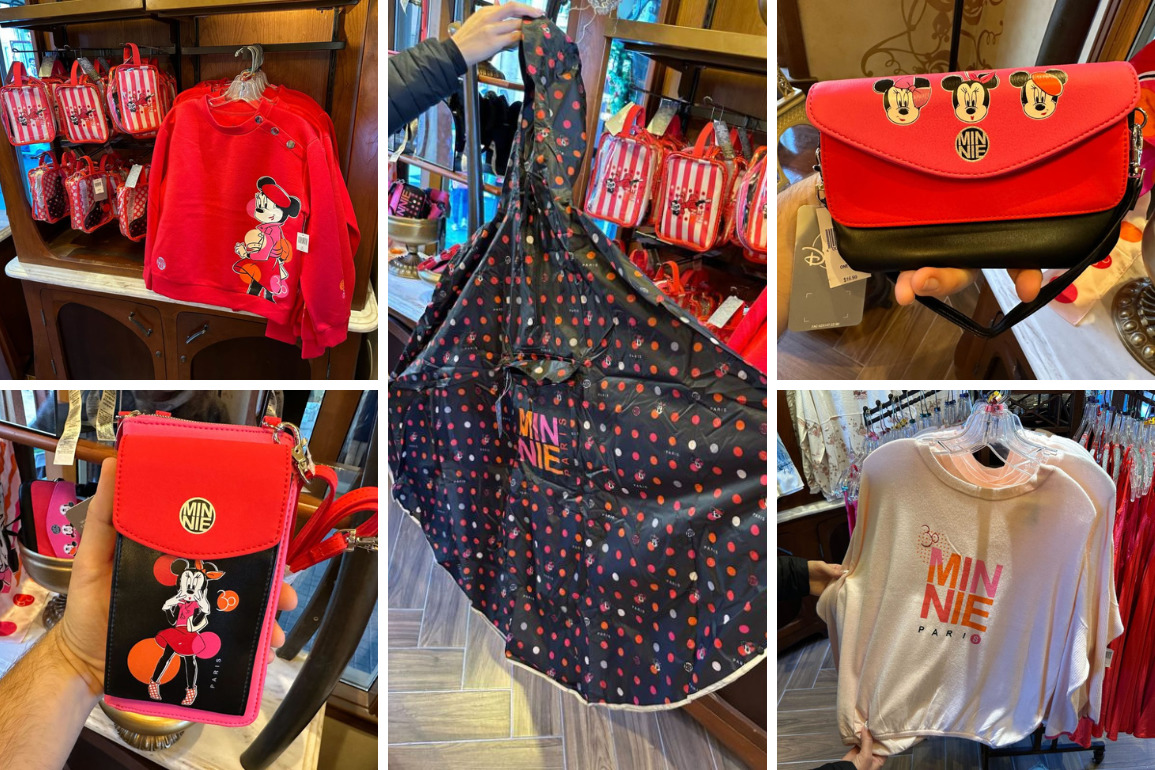 Minnie Mouse steals the show in a collection of new merchandise celebrating the 30th Anniversary of Disneyland Paris. The collection was first spotted in Plume et Palette, part of the France Pavilion in EPCOT. The collection is aptly named “Minnie Paris.”

The sweatshirt is a crewneck with disc buttons adorning the left shoulder.

The clear cosmetics bag is outlined in red. Two smaller zippered pouches are inside, one in pink with white polka dots, and another in pink and white stripes with Minnie on the front.

Included in the set is a black sleep mask, also patterned with Minnie’s iconic dots.

This large, colorful silk scarf has Minnie in a coquettish pose while rocking a short red skirt, pink top, and red and white polka dotted boots.

The crossbody wallet is colorblocked with red, black, pink, and orange. Minnie is once again front and center.

The red straps clip onto the sides of the wallet, transforming it into a crossbody bag.

If you prefer a larger bag, a small red and black purse featuring three Minnie Mouse heads is also available. One dons a classic bow, while the others sport a smaller bow and beret.

The back of the bag has “Minnie” and “Paris” with the iconic polka dots.

It’s lined in red, and the removable black strap lets you convert this from a purse with a strap to a clutch in a snap.

If the typical Walt Disney World rain poncho isn’t stylish enough for you (and really, when is it?), you could opt for the newest accessory: the Minnie Mouse Disneyland Paris 30th Anniversary rain poncho. This poncho is its own bag for convenient storage. Once you unzip the pouch, you can unfold the poncho.

Orange, white, and pink dots are scattered throughout the black background, with Minnie rocking her different bows and beret.

This red nightgown is trimmed in pink lace with a strolling Minnie Mouse on the front, and the Disneyland Paris 30th logo as well.

The pants have Minnie/Paris embroidered on the upper left leg in pink and orange. There’s a pink drawstring waist, zippered pockets, and a thin double white stripe down the legs.

Similar to the nightgown, a pink sleep set is available. It’s trimmed in lace and showcases Minnie and her dots on the front. This time, Minnie has an orange bow perched at an angle. The bottoms are also trimmed in lace with “Minnie” in block lettering through a silver circle on the leg.

The last item we found is an ivory, elastic waist sweater. This sweater doesn’t have Minnie herself featured, but instead just her name and the 30th logo on the back of the sweater.

It has ribbed sleeves and disc buttons down the front.

Will you be adding any of the new Minnie Paris items to your closet? Let us know in the comments below!