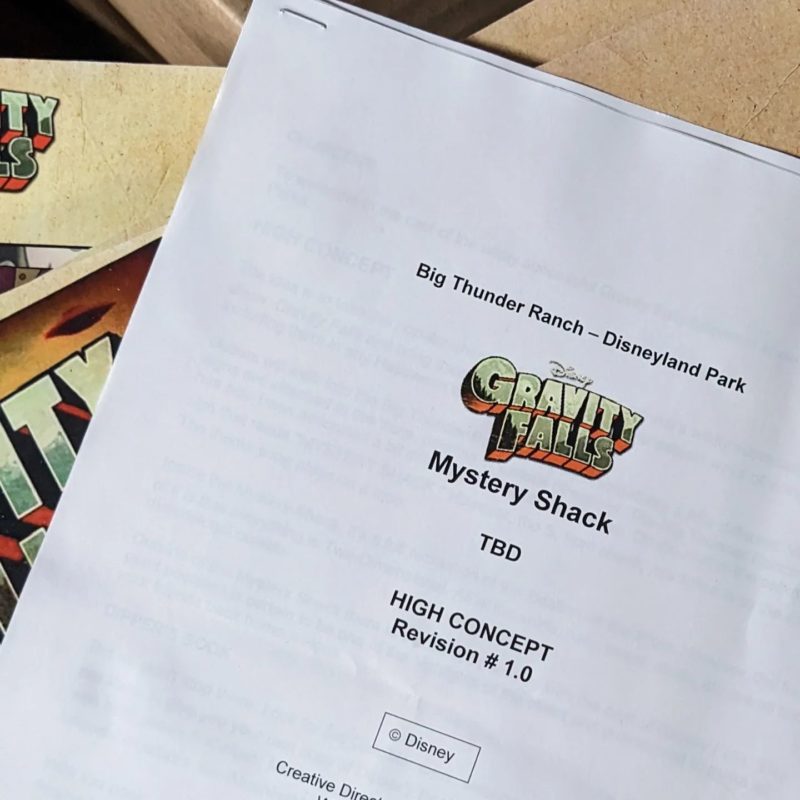 In an Instagram post this afternoon, former Imagineer Brandon Kleyla shared a pitch he once gave to incorporate the cult classic Disney Channel series “Gravity Falls” into Frontierland at Disneyland… to a somewhat muted reaction.

The original post, shared on his public Instagram page, shows a pitch idea for the Mystery Shack at Disneyland, as part of the now-bulldozed Big Thunder Ranch. His caption reads “The things you find while cleaning out storage… This was an idea I pitched and they looked at me like I was insane. I have vivid memories of that meeting where I was asked some of the dumbest questions I’ve ever been asked. It’s a shame the show finally found its popularity after it had been cancelled, right @_alexhirsch_! We could have had so much fun! Oh well, another idea on the pile of forgotten ideas.”

Kleyla did not elaborate on what would’ve been part of the Mystery Shack in Big Thunder Ranch, but based on the space, it would’ve seemingly been a short walkthrough featuring the kooky oddities which found their home in Grunkle Stan’s tourist trap from “Gravity Falls.” Big Thunder Ranch has since been demolished to make way for Star Wars: Galaxy’s Edge at Disneyland. Very little has ever made it from the show into the parks save for a MagicBand we found last year.

“Gravity Falls” aired on Disney Channel and Disney XD from 2012 to 2016 and focused on Dipper and Mabel Pines, fraternal twins who are sent to live with their great uncle Stan in his “Mystery Shack” out in Gravity Falls, Oregon, a town known for mysterious and supernatural happenings. Through the series they encounter various obstacles and foes including the nefarious Bill Cipher, an inter-dimensional demon as they discover the truth about the town and their family. The series had trouble finding its audience at first but gained in popularity near its conclusion, and is available to stream on Disney+.

Kleyla is also best known as the Imagineer behind Trader Sam’s at both Disneyland and Walt Disney World, and now works with Universal Creative.

Would you have liked to see “Gravity Falls” incorporated into the Disney parks? Let us know in the comments below!

Genie+ Sells Out for the 1st Time, Two Days in a Row at Disneyland Resort

After Only Two Weeks, ‘Avatar: The Way of Water’ Crosses $1 Billion Globally