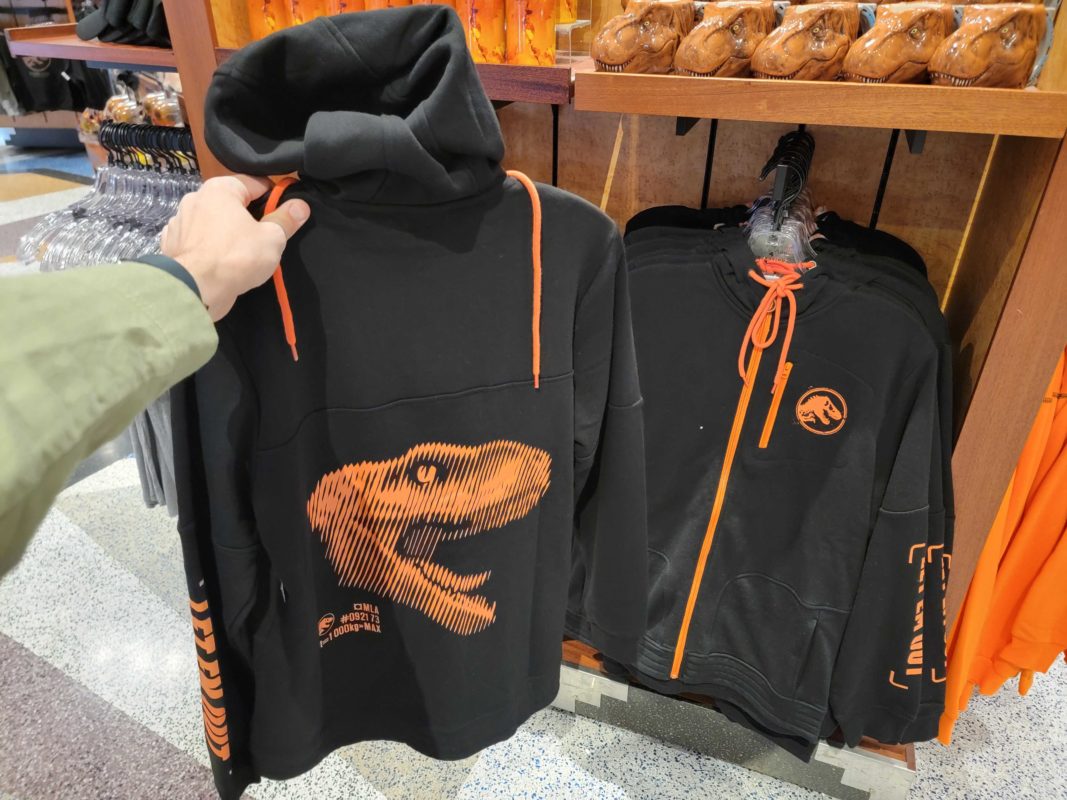 We recently spotted this new Jurassic World Zip-Up Hoodie at the Studio Store in Universal Studios Hollywood that is all about letting the raptors roam in style.

With the release of this Jurassic World Let Em Out Zip-Up Hooded Sweatshirt, following the summer release of the third and film of the Jurassic World series, this year may just be the year of the dinosaur. The screen-printed graphics and hardware are a bright orange, making everything pop out from this black zip-up hoodie.

On the front of the hoodie, two slip pockets are separated by a bright orange zipper affixed with circular raptor claw hardware that’s also orange and black. The signature T-rex skeleton logo from the “Jurassic Park” franchise, or Logosaurus as it is known affectionately by fans, is made to look worn in bright orange on the chest. This graphic is emblazoned on a zippered chest pocket for added storage and an added orange flair. If the front of this black hoodie didn’t stand out enough already, this Jurassic World Sweatshirt features a matching bright orange drawstring.

The sleeve of this hoodie certainly doesn’t go unnoticed. ‘LET EM OUT’ stands out in screen-printed and stencil-styled orange lettering. Not to be overlooked, the back features a fierce raptor designed to pop out from its drawn lines with some of the dino’s InGen stats listed in the bottom left corner.

The hood is lined with white and orange camouflage made from the outlines of the “Jurassic Park” franchises’ most beloved creatures and a pattern of the signature Jurassic Park and Jurassic World logosaurus highlighted throughout.