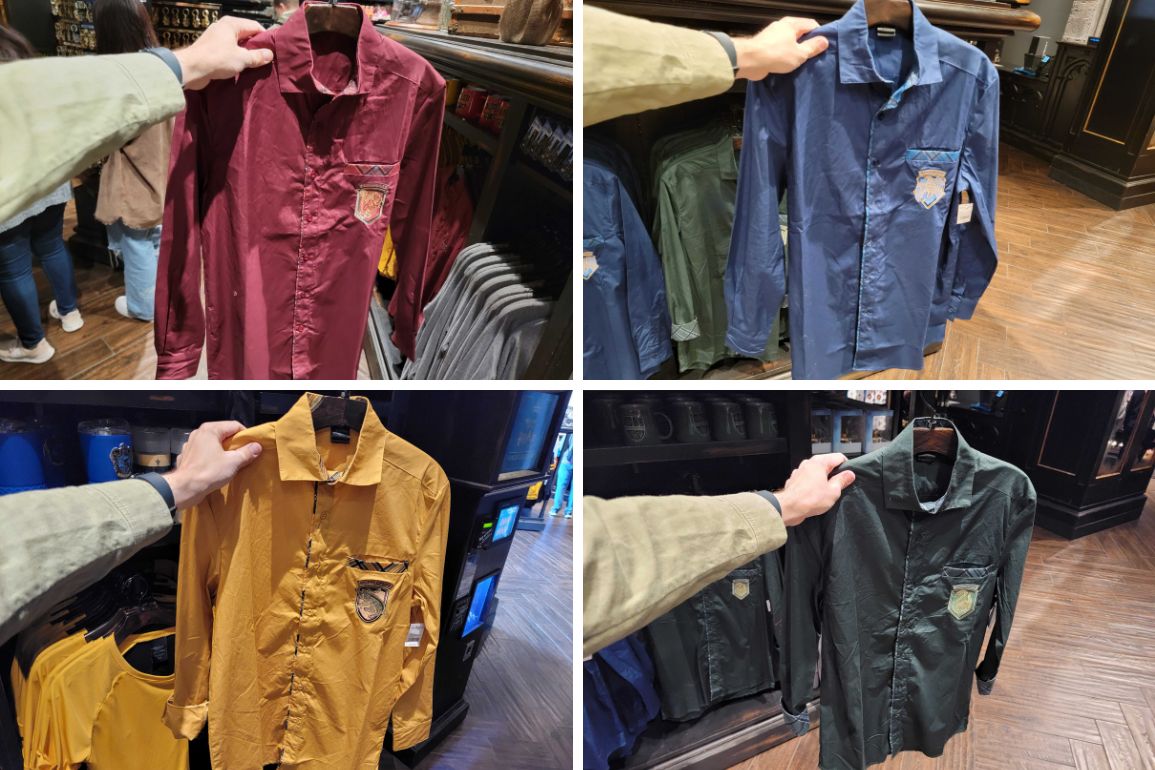 It’s no surprise that the house of Godric Gryffindor is represented with this scarlet-colored Hogwarts House Button-Up. The Gryffindor House crest is embroidered in scarlet red, golden yellow, and silver on the oxford shirt’s chest pocket. The crest, of course, features the Gryffindor lion standing out from a background of fire.

The shirt’s pocket is lined in silk with a red, yellow, black, and gray tartan plaid pattern that peaks out above the crest. The inside of the shirt’s collar, buttons, and sleeves are also lined with the same plaid pattern.

The yellow and black that are signature to House Hufflepuff make this button-up stand out among hard-working and loyal wizards and witches. The Hufflepuff crest, featuring a black and wheat badger, stands out as in embroidery from the button-up’s chest pocket.

Like the Gryffindor shirt, the Hufflepuff oxford is also lined in a silk tartan plaid. In keeping with Hufflepuff house colors, the featured plaid on the pocket and lining the collar and sleeves is also black and yellow.

If you’re as wise as a Ravenclaw student, you probably knew what to expect with this Ravenclaw Button-Up. This version is a sapphire blue and features the golden eagle house crest synonymous with Hogwarts’ most intellectual house of witches and wizards.

The plaid pattern on House Ravenclaw’s featured shirt is in blue, white, and black, adding a subtle pop to this oxford shirt.

Slytherin House is easy to identify in a signature green button-up. An embroidered green and gold serpent crest has slithered its way onto the Slytherin-themed shirt’s chest pocket. A cunning and determined Slytherin student would find the silver, purple, and green plaid lining the shirt’s collar, pocket, and sleeves a nice touch.

Whether you’ve chosen your favorite house within Hogwarts School of Witchcraft and Wizardry or it chose you, these four classic button-ups may be the touch you’re looking for to showcase your school spirit and your house pride. If you’re stopping by the Studio Store at Universal Studios Hollywood, you may want to stop into Ollivander’s to check out the park’s exclusive Harry Potter wand, as well. An all-new Butterbeer Collectors Metal Stein can be purchased at several locations throughout the park, as well.

Limited-Release Captain Carter’s Vibranium Shield from ‘What If…?’ Arrives at Walt Disney World