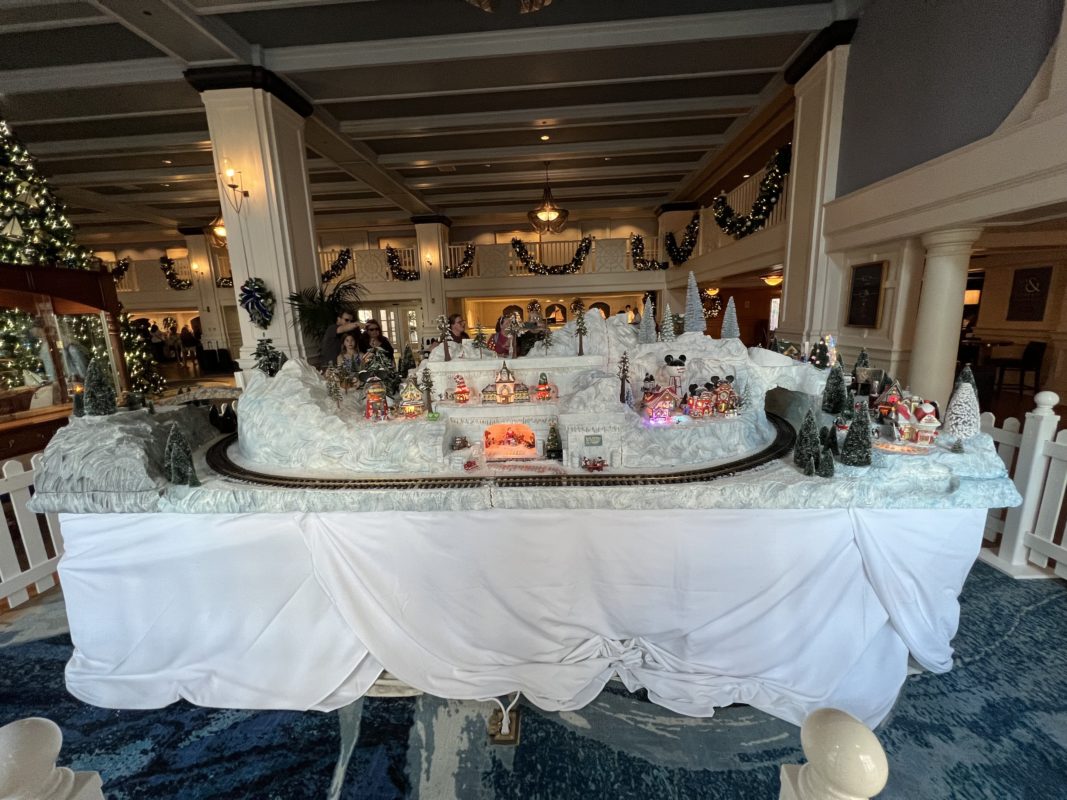 The model train and Christmas village have returned to Disney’s Yacht Club Resort for another year of festive cheer.

The village is in a fenced-off area in one corner of the lobby.

It includes multiple levels of snow-capped mountains, with the train going in a circle around the base.

The train takes hour-long breaks and is turned off overnight, as listed on this sign.

There are small pine trees, some with a dusting of snow and some with Christmas decorations.

The display includes references to the Yacht Club Resort.

There’s a small billboard for Bayside Marina beneath a village of houses.

Next to a stone bridge going over the train track is a billboard for Captain’s Grille.

There are tiny figures dressed in their winter clothes.

Some figures are skiing on a slope.

A gondola lift stretches across another section of track, near a snowman water tower.

A treehouse has a Mickey head on the side.

An Ale & Compass billboard is tucked behind a Coca-Cola store and Minnie’s candy shop.

Santa Claus is getting ready in a cave next to the track. Two Mater is parked nearby.

The train engine is black and tows red cars, each sporting holiday decorations.

Donald’s Toys is next to Mickey’s Gumball Emporium (guests cannot touch the village so, no, you can’t get actual gumballs from the gumball machine).

At the top of the mountain is a Cape May Cafe billboard.

One Christmas tree is topped with golden Mickey ears.

Yachtsman Steakhouse is advertised on a billboard below the gondola lift.

A sign for Crew’s Cup sticks out of the mountain, below the Yacht Club Galley building.

Watch our video of the model train and Christmas village:

Check out the rest of the holiday decorations at Disney’s Yacht Club Resort.

One Full Canopy Section Nears Completion, Crew Prepares to Pour Concrete at TRON Lightcycle Run at M...March 16, 2022
Special Offers Available for Aulani, A Disney Resort & Spa From August to December 2022April 7, 2022
How to Link and Set Up the New MagicBand+ in the Disneyland AppOctober 19, 2022