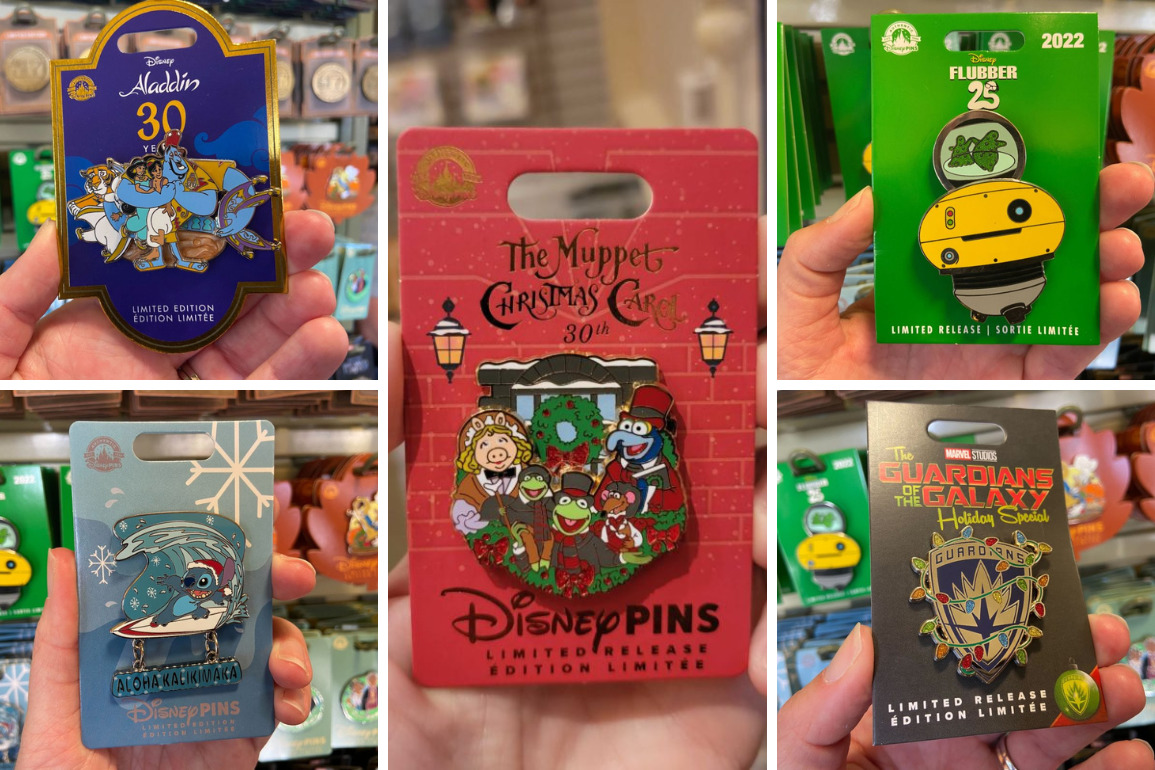 On recent trips to Disneyland Resort, we rounded up tons of exciting new pins for any trader or fan, including many limited editions and anniversary exclusives.

This limited-release pin celebrates the 25th anniversary of the 1997 film “Flubber.” It features Weebo, the robot assistant to Philip Brainard (Robin Williams), showing us some flubber on her video screen.

Boy, oh boy, Donald is whipping up some delicious dinner on this limited-release Thanksgiving pin. The pin features everyone’s favorite duck preparing a meal with the words “Happy Thanksgiving” and the date “2022” on it. He is surrounded by pumpkins, corn, pies, and all the colors of fall.

Don’t lose your head over this limited edition Our Transformation Story Queen of Hearts pin. The short-tempered queen from “Alice in Wonderland” is giving us all of her best expressions on this pin. She is seen smiling, sneering, and smirking in her signature red and black dress. The queen is surrounded by some likely ill-fated cards and roses in various stages of being painted red. The edition size is 2,750.

The Guardians of the Galaxy: Holiday Special Pin – $17.99

Just in time to celebrate the new Holiday Special, this Guardians of the Galaxy pin has made its debut. The Guardians’ navy and gold emblem has been wrapped in a string of multi-colored lights.

Bright suns! This hinged pin is part of a series focusing on various locations around Black Spire Outpost. This pin is for Docking Bay 7, with the restaurant’s logo featured on the front. The Aurebesh lettering reads “Docking Bay 7 Food & Cargo.”

The inside has the Black Spire Outpost logo on one side, with the image of Strono Tuggs’ Grub Sienar-Chall Utilipede Transport docked at the bay. It can be seen on top of the building in Galaxy’s Edge. It has a limited edition size of 3,000.

Mele Kalikimaka Stitch fans! Stitch is ready for the holidays on this new pin. He is seen surfing in a Santa hat with the words “Aloha Kalikimaka” hanging just below him. He’s ready to hang ten for the holidays. The pin is a limited edition of 4,000.

We may not talk about Bruno but people will certainly be talking about this new Encanto pin. Mirabel and Abuela Alma are wishing everyone a Feliz Navidad surrounded by a festive flower-adorned wreath on this limited-release pin.

Namor from the film “Black Panther: Wakanda Forever” appears on this new pin. His name is right below his picture, and the entire pin is wrapped in a gold filigree frame.

Ironheart, another new character from “Black Panther: Wakanda Forever,” is pictured on this pin wearing the impressive suit that she built. The word Ironheart is right below her picture.

Everyone’s favorite couple in Agrabah appears on this 30th anniversary Aladdin pin. Aladdin and Jasmine, as well as their flying carpet, are sitting atop a roof with fireworks going off over the top of them.

Jafar, the power-hungry villain, and his parrot sidekick Iago are featured on this 30th anniversary Aladdin pin. Also pictured is the Cave of Wonders, which Jafar just can’t seem to stop obsessing over.

Aladdin is looking mighty regal on this pin as he stands with the characters from his Prince Ali royal caravan. Abu is disguised as an elephant but is still donning his vest and tiny hat. This has a limited edition size of 4,000.

Almost everyone is here on this Aladdin pin. Genie is wearing his tourist outfit and has his arms wrapped around Aladdin, Jasmine, Abu, Raja, the Sultan, and the magic carpet. Nice Goofy hat, Genie! This pin is a limited edition of 4,500.

Make it the best day ever with this Rapunzel two-pin set. Rapunzel is stroking her hair surrounded by the lanterns that she’s always dreamed of seeing on the first, mostly purple and pink pin. The second pin has a light pink background with the words “Let Your Light Shine” and the magical flower on it in black.

Tiana will inspire us all to follow our dreams in her new two-pin set. Tiana is wearing her gorgeous white dress and feather headband that she wears to her restaurant in the film. The background is red with images of various kitchen utensils. The second pin has a light pink background with the words “Live Your Passion” in black.

Cinderella is dressed for the ball on the first pin of this two-pin set. She’s wearing her signature blue dress and surrounded by a pumpkin and a clock striking midnight. The second pin in this set has the words “I Love To Sparkle” on a light blue background with the image of her infamous glass slipper.

The first pin of this set features Princess Jasmine gazing at the magic lamp that is in her hands on a gold background. The second pin has the words “Follow Your Heart” in black lettering on a light blue background and also has the outline of the magic lamp.

Belle is ready for an enchanting evening in her gold ballgown on the first pin in this set. She stands out against the pale pink background with a lightly etched floral frame. The second pin in this set features the rose from the West Wing with the word “Enchanting” right below the flower.

Get ready for Walt Disney Day with this limited-release Mickey pin. Mickey Mouse is looking out the window of Walt Disney’s famous apartment in Disneyland. Above the red awning at the top of the pin, “2022” is printed in black font. On the bottom window ledge are the words “Walt Disney Day.” It’s the perfect pin to celebrate the man that brought us all of the magic. Walt Disney Day is the first Monday in December every year.

The other side of the Walt Disney Day pin features one of Walt’s most famous quotes “Disneyland will never be completed. It will continue to grow as long as there is imagination left in the world.” Of course, it’s only appropriate that the words are displayed in the window of Walt’s Disneyland apartment located on Main Street, U.S.A.

It’s time to play the music. It’s time to light the lights. The Muppets appear to be getting us ready for both this holiday season, and they don their festive caroling garb. This Muppet Christmas Carol 30th anniversary pin features Miss Piggy, Kermit the Frog, Rizzo, and Gonzo wearing their holiday best in front of a wreath-clad door.

Just in time for Avatar: The Way of Water, this mystery pin set has made its way into the parks. There are eight pin options in this set and two pins per box.

All eight available designs are pictured on the side. Each box contains two randomly selected pins.

Ms. Marvel is in her blue, red, and gold hero suit and on this new Her Universe pin. She’s against a light purple background with the word “Represent” in black lettering vertically down the side. This pin is a limited edition of 3,000.