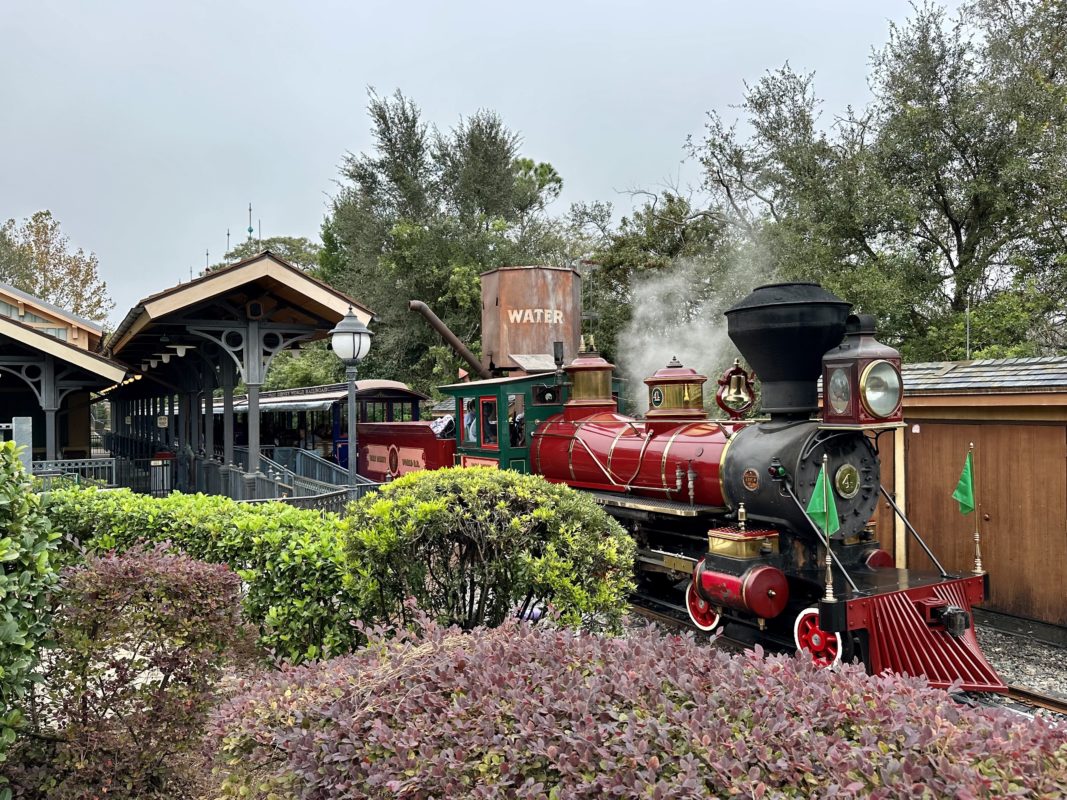 Happy, merry, holly jolly, season’s greetings! We are back in Magic Kingdom today. There’s only 3 more days until Christmas and we’re doing some last minute shopping. We also planning on checking on TRON Lightcycle Run construction and the Walt Disney World Railroad to see if there are any updates. Let’s get started!

The Walter E. Disney train was out at the Main Street Train Station as we entered the park this morning.

It was a very foggy morning here at Magic Kingdom. We could barely see Cinderella Castle from Main Street, U.S.A.

Only 3 more days until Christmas! Let’s do some last minute Christmas shopping.

New leggings were available in the Emporium.

The first pair of leggings featured a blue ocean wave design with Stitch and flowers.

The other pair of leggings featured Chip ‘n Dale and a retro swirl design. This legging design matches the other retro swirl merchandise we have found previously.

There was also a new Stitch T-shirt to go with the leggings. This shirt states, “Stay Cool,” and features Stitch.

Two new Mickey Mouse fleece jackets were available in the Emporium. These jackets have arrived just in time for the low temperatures that are expected to hit Walt Disney World in the next couple days.

In Bigtop Souvenirs, a new 2023 photo album has arrived just in time for the new year featuring Mickey and friends.

We heard the Walt Disney World Railroad whistle and decided to go investigate.

Cast members were seen entering Fantasyland Station and were loaded on the Walter E. Disney train.

The Walter E. Disney was doing testing but this time with Cast Members on board.

We waved to the passengers as they went by on the train. We observed Cast Members from Magic Kingdom riding the train this morning for previews.

Disney has confirmed the Walt Disney World Railroad will reopen with a new voiceover this holiday season. We can’t wait for the train to open!

Thanks for following along with our day.