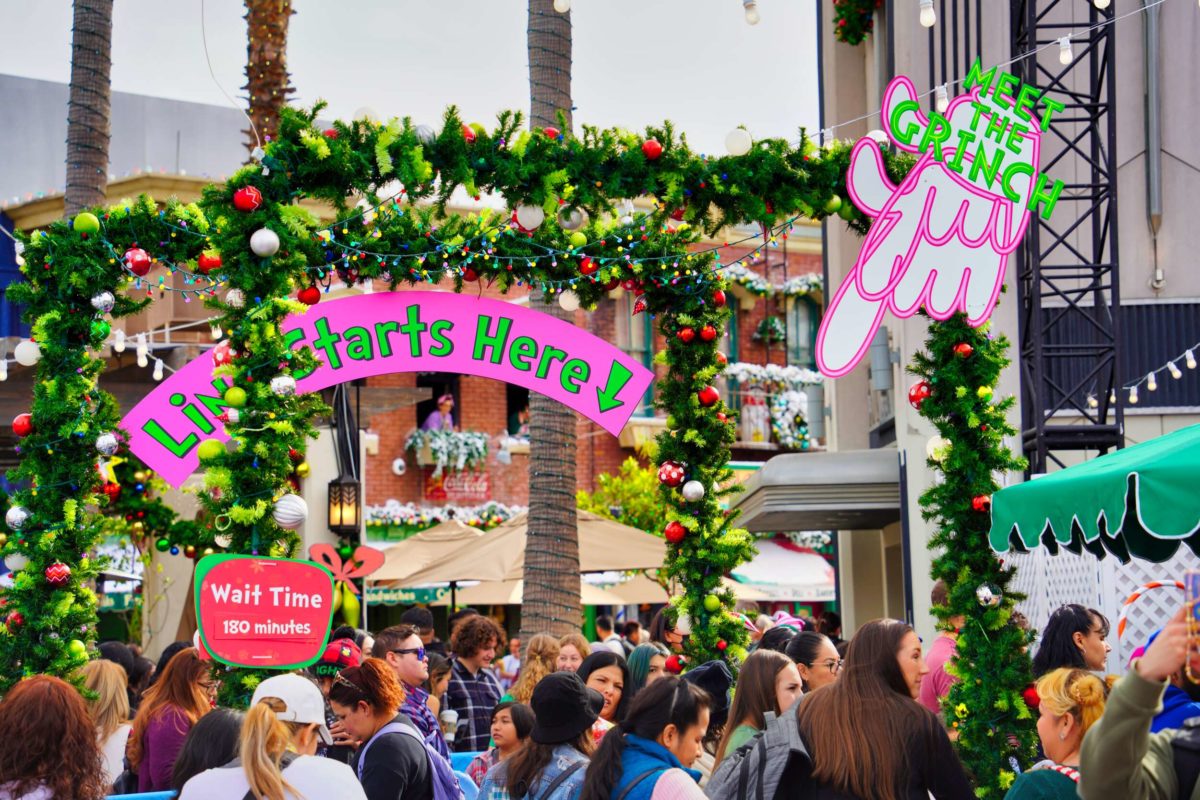 Let’s head into the park. This will be our last trip before Christmas, and we wanted to see the decorations again before the season is over.

Apparently, so did everyone else. It was a madhouse today. The line for Guest Relations alone stretched all through the queue and back to the entrance gate.

Despite the crowds, many seemed to be in holly jolly spirits.

And to look your best at the Yule Ball, these Hogwarts houses button down shirts are perfectly dapper.

It’s just as crowded as everywhere else. But magic crowded.

While pinned down by the crowd, we were able to see the Triwizard Spirit Rally on the nearby stage. These Beauxbatons dancers were fantastic.

We also caught another show, the Who-ville Welcome Committee. This is a fun kids show that is only here for the Grinchmas season.

The crowds had descended on Grinchmas as well, with a 180 minute wait time to meet The Grinch.

In Super Nintendo World, we’ve got vibrant new paint on the Toadstool Cafe and new banners hung on the castle.

We also have some brickwork being applied to the entrance area behind the roll-away walls.

But as the sun goes down, we get a beautiful sunset and even more updates.

The lights are on inside the land. The sign is lit up out front and the entrance pipe is testing its light effects as well.

Inside the land, we can see the signs for the cafe and the shop are illuminated, and the street lamps are as well.

Out here in the Lower Lot, the Super Nintendo World popcorn stand is also lit up. We have seen this stand in the daytime and even tried all three of their new sodas, but this is our first glimpse at night with the lit-up signs.

You can see our whole review of the offerings at this new stand right here:

Nearby, we noticed a new sign hung near the exit of Transformers: The Ride-3D.

When the land opens and crowds swarm the entrance, a reservation system will be enacted as needed. Guests will have to go here if they have trouble making the reservation in the USH app.

The sign directs guests down this pathway, near the back of the Revenge of the Mummy – The Ride showbuilding.

Another directional sign ushers guests further down the path, but the gates are closed as the land isn’t open yet.

Let’s take a ride. We hopped aboard Secret Life of Pets: Off the Leash and, of course, it broke down.

But as we were sitting in the fireworks warehouse scene with the lights on, we noticed a little birdie in a Santa hat way up in the back.

It’s Sweetpea the parakeet, and he has the fuse to some firecrackers in his mouth. He must be the one who sets off all the fireworks for the action of the next scene. And for the season, he’s looking very festive. What a fun Easter Egg.

Ok time to leave, but that’s easier said than done. The crowds were insane and the circular flow guest traffic system that is in place made things very difficult.

Portable gates manned by Team Members are erected all around the Upper Lot to cut off flow near the entrance to the Wizarding World and drive guests deeper into the park.

Rather than moving in a straight line to the exit, we were funneled away from the front of the park, back down French street,

cirling around the Illumination area, up Pets’ Place,

and directly through the massive crowd waiting to see the nightly tree lighting at Universal Plaza. Then we reached the front of the Universal tower and made the escape. What should have been 90 second walk past the Dreamworks Theater turned into a 15 minute circuitous experience, but at least we got some nice photos out of it.

And overall, we had a great time. Crowds and all.

Our Martini Shot of the day is from CityWalk, where the jumping fountains are once again jumping and now have festive lights beneath to make for a fun holiday display.