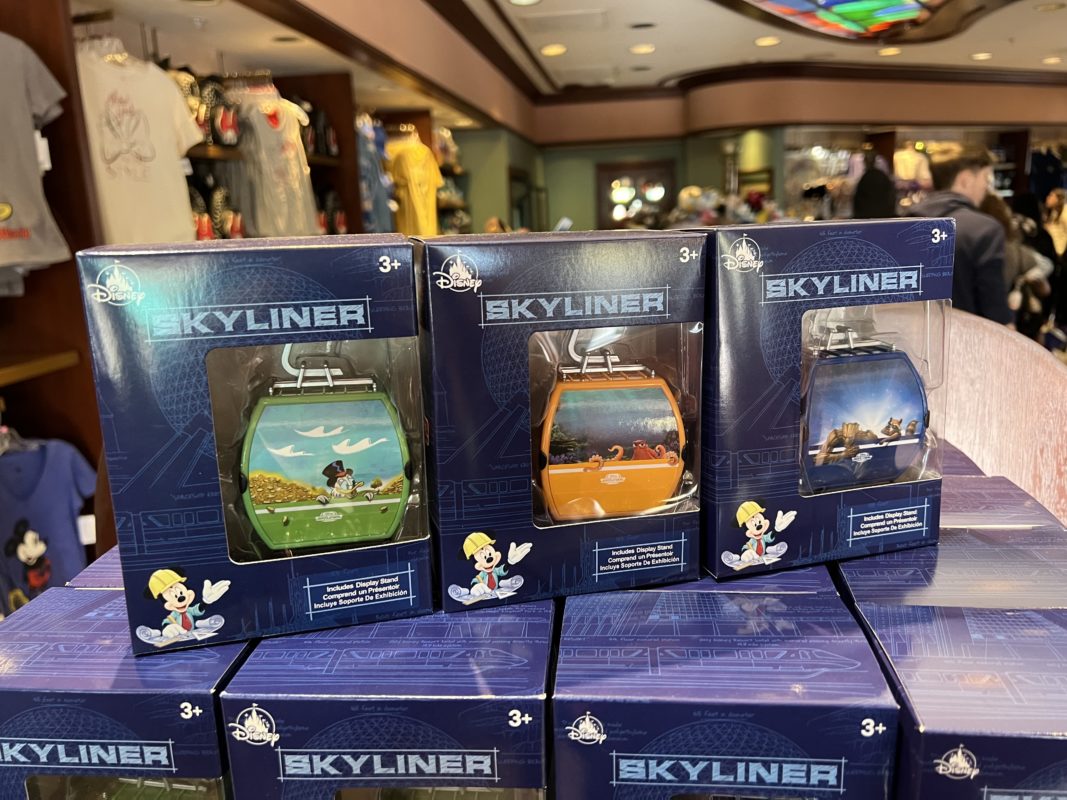 Donald, Daisy, Scrooge McDuck, Huey, Dewey, and Louie all take a ride along in this Disney Skyliner. The Disney Skyliner branding is shown in white on either side of this green Disney Skyliner gondola. A display stand ensures the Skyliner stays suspended for all to see.

Scrooge McDuck himself is featured in the large window of the gondola, surrounded by a pool of gold. Donald appears to be lost as he looks angrily at a map next to the amazed Daisy Duck in the front window.

On the opposite side, Donald’s beloved triplet nephews, Huey, Dewey, and Louie, look excited as they point to the sights on the opposite side of this miniature Skyliner gondola. The clear Disney Skyliner doors open allowing for a peek inside.

This Nemo and Friends Disney Skyliner is inspired by Disney and Pixar’s “Finding Dory” and features Nemo, Dory, Marlin, Crush, Hank, and other undersea friends. The orange Disney Skyliner shows the transportation’s branding on all sides, while the windows peer into an undersea world.

Hank the beloved octopus can be seen in the large window of the gondola, as two of his seven tentacles hang over the edge. Nemo, Merlin, and Dory look happy to be found in the front window of the Disney Skyliner.

Crush and some of Nemo’s other undersea friends can be seen in a bed of coral on the opposite side of the miniature Skyliner. The Nemo and Friends Disney Skyliner Collectible also features clear sliding doors and a suspending display stand.

Join the Guardians of the Galaxy as they ride aboard this blue Disney Skyliner collectible. Groot and Rocket Raccoon are the first characters to be seen peering over the side of the Disney Skyliner gondola. Rocket appears to be pointing to something below as a large Groot leans over the white Disney Skyliner branding on the front of the gondola.

Star-Lord leans against the front window, while Gamora poses with a sinister smirk.

Yondu is seen protecting the beloved stowaway dog Cosmo on the opposite side. The Guardians’ new ride of choice also features clear sliding doors and a suspending display stand.

A 2023 Mickey and Friends Skyliner Collectible was also spotted recently as part of the Disney Parks Dated Collection.

Are you planning to add any of these new Disney Skyliner Collectibles to your inventory? Let us know which one is your favorite in the comments.