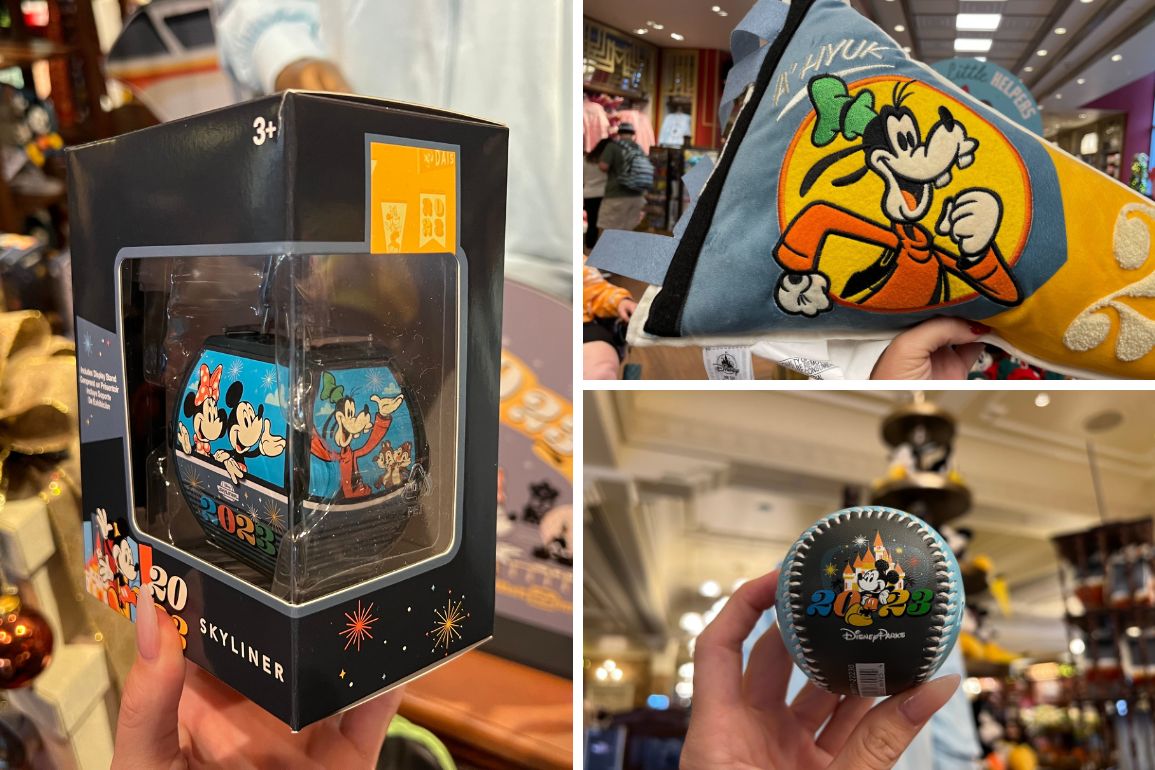 With a few weeks to go until the New Year, more 2023 merchandise welcoming in the new year has been spotted around the shops of Walt Disney World, including a Goofy and Cinderella Castle Pennant Pillow, 2023 Disney Skyliner Model, Mickey & Friends Baseball, and a Mickey & Friends Mystery Pennant Pin Set.

This double-sided Pennant Pillow was spotted at Mickey’s of Hollywood at Disney’s Hollywood Studios this morning. A large embroidered Goofy is showcased on one side with his signature “A’HYUCK,” highlighting the top of the circular frame.

Goofy’s excited expression is presumably for the new year, as he is juxtaposed with a bright yellow on the remaining 2/3 of the pennant, with a cream-colored “2023” embroidered in as large of a font as would fit toward the point of this classic-looking pennant flag.

The opposite side features a silhouette of Cinderella Castle front and center. A classic Walt Disney World logo is embroidered in blue at the pennant’s widest side, while a Mickey Mouse icon stands out at the point of this pennant, embroidered on a bright orange chevron triangle.

This 2023 pennant pillow features fringe trim at its widest edge. With its bright but classic colors and soft stuffing, this might be one of the comfiest options in the Disney Parks Dated 2023 Collection.

A model Disney Skyliner has hit the shelves of Discovery Trading Company in Disney Animal Kingdom as part of the Disney Parks Dated 2023 Collection. This Skyliner features some pretty recognizable passengers, including Mickey and Minnie on one side and Goofy and Chip ‘n Dale on another. The Disney Skyliner branding is shown just above the signature “2023” on the front of the Skyliner. A display stand ensures the Skyliner stays suspended for all to see.

A 2023 Mickey & Friends Baseball has rolled into the Emporium at Magic Kingdom. This baseball features black and blue leather with white laces. Mickey leans on the signature 2023 logo that has been featured on most items in this collection, with fireworks illuminating the castle behind him.

The signatures of Goofy, Donald, Daisy, Mickey, Minnie, Pluto, and Chip ‘N Dale are stamped into the blue leather with a second 2023 logo featured twice more in between. Baseballs were a featured favorite of the Disney Parks Dated Collections for years, but these collectibles have been missing for the past few annual iterations.

A six-pin set of Mickey & Friends pins celebrates 2023 as part of the collection found at the Frontier Trading Post. As part of the newest series of the Disney Parks Dated Collection, this set features Mickey, Minnie, Donald, Daisy, Pluto, and Goofy. Each beloved character stands in front of a Disney castle with a large signature “2023” in the foreground.

These items are just the latest in 2023 merchandise to hit the shelves of your favorite Disney Park Shops. A 2023 Monorail lunch tote, pin collections, and stuffed plush animals were spotted around Walt Disney World Resort yesterday, while 2023 ornaments and displays caught our eye the day before.

Are you planning to add any of this new 2023 merchandise to your collection? Let us know in the comments.

Disney Employees Back Out of Home Purchases in Central Florida as Move From California is Delayed to...June 30, 2022
BREAKING: New 'Multiverse' Attraction Coming to Avengers Campus at Disney California AdventureSeptember 9, 2022
REVIEW: Las Posadas Holiday Kitchen Arrives with a New Tostada, Tamale, and More at the 2022 EPCOT I...November 25, 2022