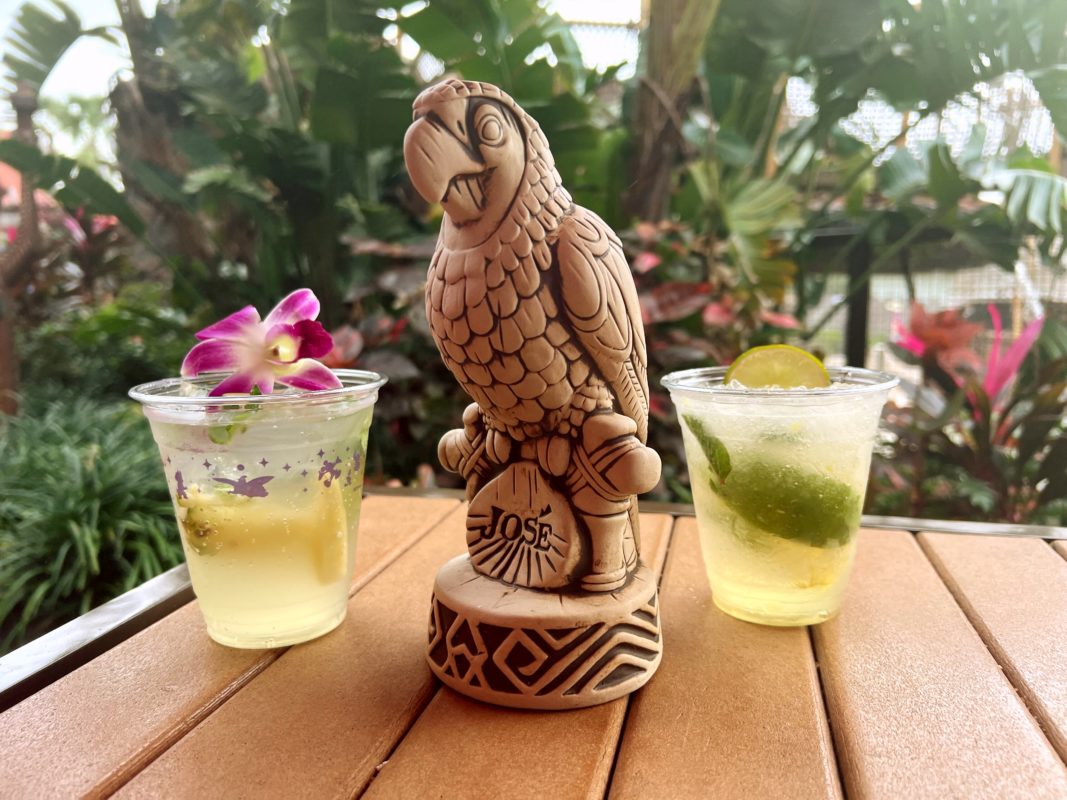 José, one of the four masters of ceremonies at Walt Disney’s Enchanted Tiki Room, has now been memorialized in the form of a tiki mug at Trader Sam’s! The José mug is sold with one of two beverages – an alcoholic and a non-alcoholic choice, so we headed down to try them both and pick up a mug of our own!

José Tiki Mug with a Choice of Manu Aloha or Blame It On The Samba (Non-alcoholic) Beverage – $50.00

How handsome is this boy?! From his feathers to his perch, José is richly detailed in every detail.

Should you wish to have your own cocktail or favorite beverage from the mug, there is an opening in the back to pour your drink and insert a long straw.

The José tiki mug is sold with your choice of one of two beverages – the Manu Aloha (alcoholic) or the Blame It On The Samba (non-alcoholic).

Here is José with both drinks. The Blame It On The Samba is on the left and the Manu Aloha is on the right.

Much like the caipirinha, a popular Brazilian cocktail made with cachaça, sugar, and lime, the Manu Aloha cocktail uses Leblon Cachaça, so it’s really top shelf. The limes were not well-muddled, which in this case is welcome because it allows the bartenders to move quickly and keep the line flowing. Additionally, the small wedge of pineapple and mint leaves, used as a garnish here, do not add much flavor to the cocktail. Made properly, this would be a good drink, but the understaffed bar simply does not have the time.

Blame It On The Samba

This is the non-alcoholic drink choice. Like the alcoholic one, the lack of muddling of the lime, pineapple, and mint leaves significantly detracts from this beverage. It’s basically just ginger beer with a bit of agave. Compared to the Monstro mug release this past September, the drinks this time around are vastly superior.

Unfortunately the need to keep the line moving is obviously going to compromise the quality of the beverage, but no one’s here for the beverage anyway.

Wristband distribution for the new mug begins at 12 p.m. ET and are available while supplies last. They are for sale at Trader Sams’s Grog Grotto and Tiki Terrace at Disney’s Polynesian Village Resort.

Will you be heading over to Disney’s Polynesian Village Resort for a José tiki mug? Let us know in the comments below.

PHOTOS, VIDEOS: Save Donald From a Time Anomaly in the DuckTales World Showcase Adventure – Germany Missions at EPCOT