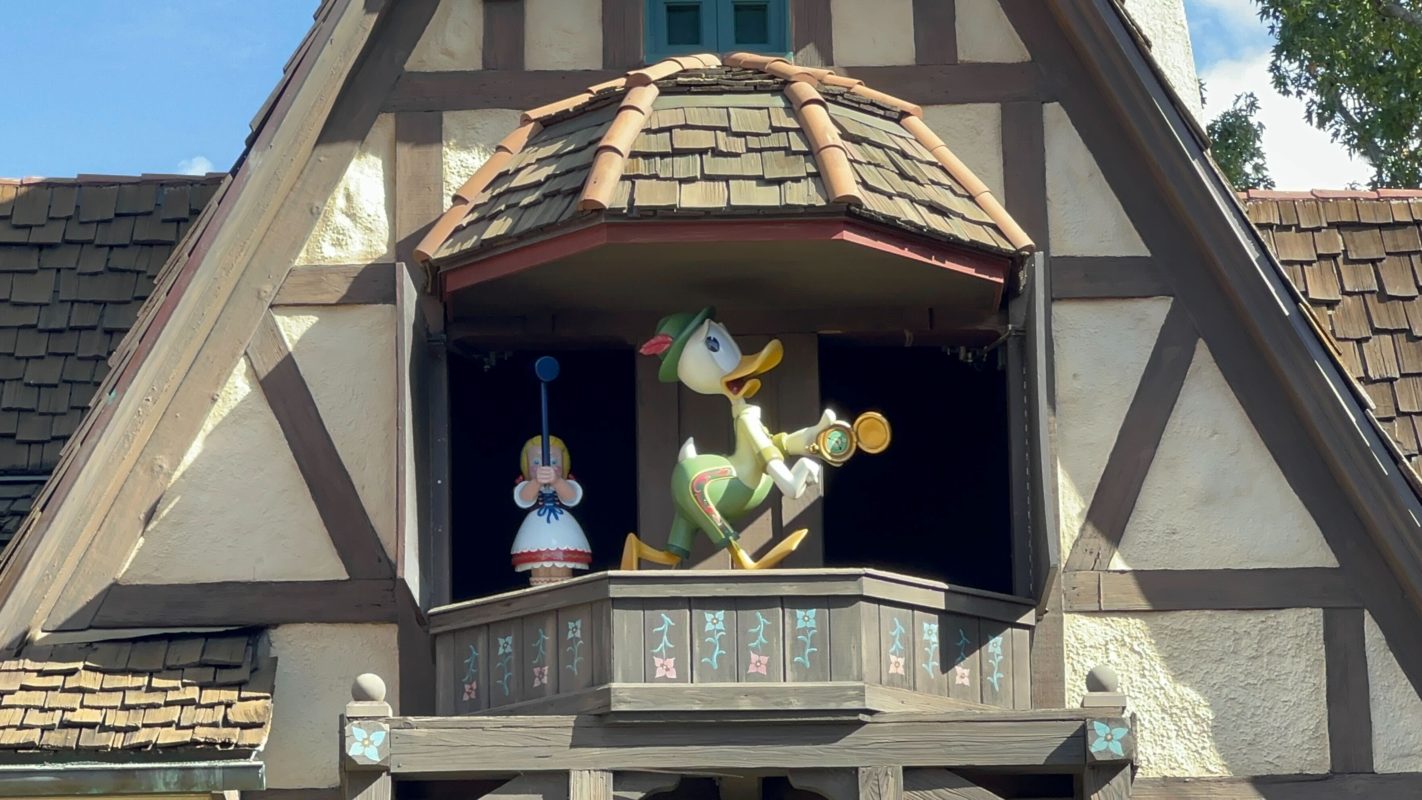 The DuckTales World Showcase Adventure game is available at EPCOT through the Play Disney Parks app. We wrapped up our first mission in China, then we hit up Japan, and now we’re headed to Germany! So follow along for our full playthrough of this exciting new game!

Once you’re logged in, you can select the game by swiping through the options and tapping “Play.”

It will take you to the start screen, where you can choose “Let’s go!” to start the game or “Exit” to go back.

Watch our playthrough videos below, and keep reading for photos and more information. During our first playthrough, sound had not been activated in the game.

Here’s our second playthrough, with sound and different missions:

Scrooge directs us to meet in Germany, and the app shows where to go at the pavilion.

He wonders what villain could be lurking, and Louie begins to say that it’s too early for a villain showdown.

This kicks off the main adven-share mission.

Magica has collected mystical cogs to power the Timepiece of Gooseldorf, which gives her the ability to control time.

She has trapped Donald in a time anomaly.

The first assistant request mission leads us to the clock store, Volkskunst (which conveniently recently reopened after being closed for over two years).

Once you select the correct item, the bird pops out of the clock.

Mrs. Beakley lets you know that you’ve successfully contained some of the time energy into the cuckoo clock.

When you complete each mission, the app will show you a badge.

Guests must find the Nutcrackers and activate the spell.

Christmas music plays, and the present below the center Nutcracker opens to reveal a code.

Entering the code traps the time energy here as well in the nutcracker!

Mission: How Does He Re-Dewey It?!

We return to Volkskunst to the Stein wall.

This is another “select the right answer” puzzle.

This activates the singing Steins, which yodel to capture time energy. Now, we have obtained all three German totems (the clock, the Nutcracker, and the Stein).

During our second playthrough, two of our missions were different. In It’s Just a Phase, we had to save Launchpad from a time anomaly. We visited the clock shop and found a red kickball. Below the kickball is a tree shelf. Once we identified the animal pattern on the shelf, we could guide Launchpad back home. Unfortunately, he ended up in the future.

Huey then sent us to the clocktower.

We searched for a flower box near Biergarten. Once there, we stood next to the lamppost and looked towards the window of Kunstarbeit in Kristall. Using “lasers” in our phone, we sliced through the locks on the window, allowing Huey to enter, sneaking past Magica. We found Mrs. Beakley talking in reverse, but used the app to decipher what she is saying.

Mission: A Witch in Time

Outside Volkskunst, we’re directed to this stained glass window.

After determining the object being held by the pictured person, we can finally activate the Glockenspiel.

This frees Donald from Magica De Spell’s time anomaly. We did it!

And stay tuned as we complete more missions!