After being closed for nearly three years, the Volkskunst Clocks and Crafts Shop has finally reopened at the Germany Pavilion in EPCOT. Come with us as we explore what’s in the shop.

Since “Snow White and the Seven Dwarfs” is a 19th-century German fairy tale written by the Brothers Grimm, references to Disney’s 1937 groundbreaking film are found in the shop.

We were told by a Cast Member that this wall was once filled with cuckoo clocks, but since reopening they have sold quite a few of them. 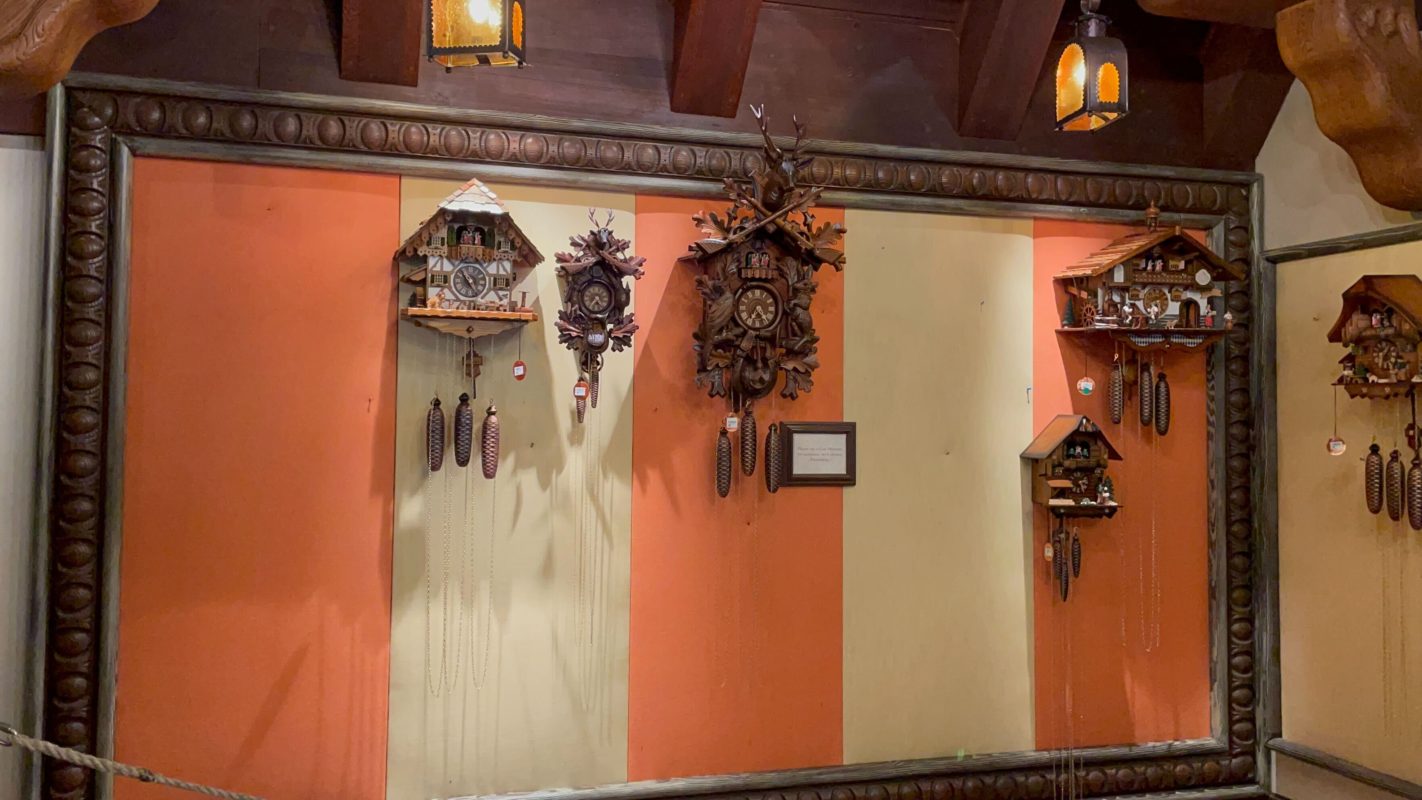 The Kidcot Fun Stop is once again open to guests.

A number of Christmas decorations and accessories are available for sale in the shop including ornaments, stockings, throws, pillows, and tableware.

The shops still connects to Das Kaufhaus. There is also a selection of German Pavilion-specific Christmas merchandise including a tree skirt with Mickey & Minnie in a traditional German village scene and t-shirts that say It says “Frohe Weihnachten,” which translates to “Merry Christmas,” with “Germany Pavilion EPCOT World Showcase” below.

Above are red sweatshirts with Mickey and Minnie, toys, and ornaments in the shape of a Christmas tree. Written above is “Schöne Adventszit” translated means “beautiful advent.” In the background is a watermark of the German pavilion with “Germany Pavilion” to the right of the tree.

Earlier this month, we reported that we even found some Germany Pavilion-themed merchandise at the Disneyland Resort.

Here we can see a wall – an actual wall, not just a temporary barrier – blocking the Der Teddybär shop. A manager told us they don’t know when it will reopen. We have been hearing rumors that it might be turned into a food service location, but as of now, it’s just a rumor.

Here we see a plethora of Snow White-themed merchandise including apparel, bags, and tumblers.

Are you excited that Volkskunst Clocks and Crafts Shop has finally reopened at EPCOT? Let us know what you have bought from the shop in the comments below.

Check out other holiday offerings we recently reported on at EPCOT:

UPDATE: Walt Disney World Reneges on Promise to Bring Back Parking Lot Trams at All Theme Parks This Year