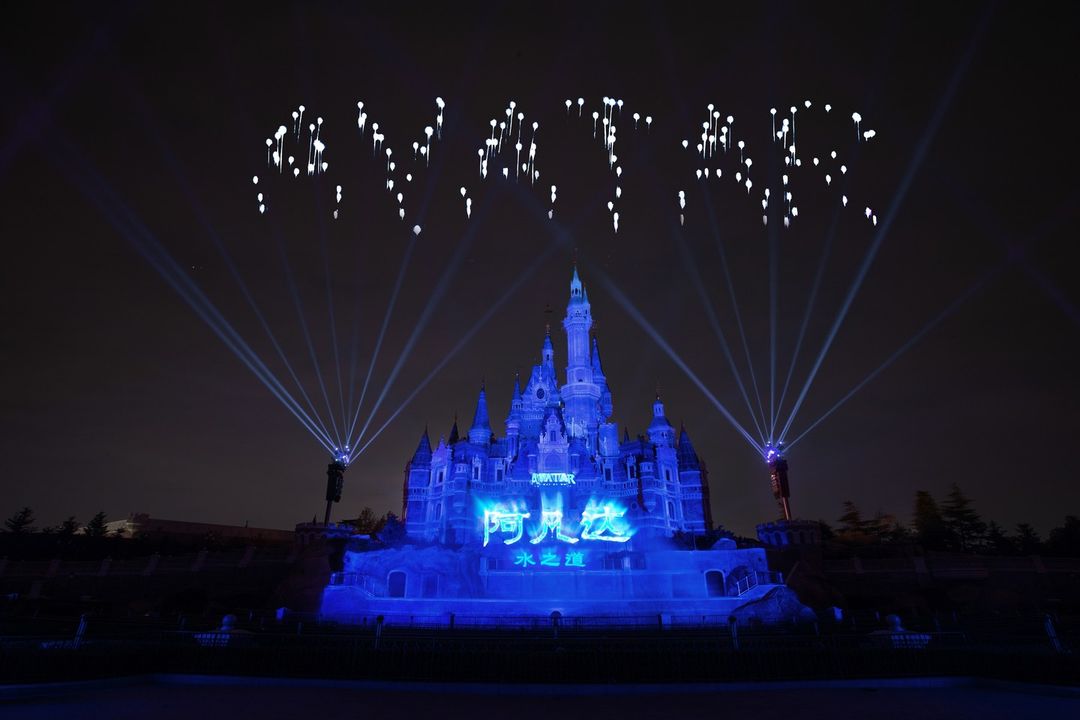 Last night, “Avatar: The Way of Water” had its China premiere at the Walt Disney Grand Theater in Disneytown at the Shanghai Disney Resort. Invited guests were treated to a special Avatar-themed nighttime show at Shanghai Disneyland theme park.

The nearly three-and-a-half-minute show consisted of numerous fireworks and exquisite projects illuminating Enchanted Storybook Castle. As the lights go down and the show starts with the first few notes of music, the castle is bathed in blue lighting, and ripples of water are projected onto the castle. The lampposts around the castle have been modified with additional lighting to resemble some of the plant life found in this exotic world.

At the same time, blue, green, and purple lasers begin flickering toward the castle as fan-shaped and timerain fireworks appear in the nighttime sky. As the projections on the castle begin to evolve with more undersea creatures we see our first Avatar-themed fireworks in the shape of woodsprites.

Scenes from the movie are now incorporated into the castle projections as the music builds. The fireworks continue to build. Other types of fireworks, many of which are familiar to Disney fans, are now seen such as large chrysanthemums, peonies, and wave shapes filling the sky.

Now the sky is filled with light and the music pauses. Just when you think that’s the end of the sequence, the music starts again, and just when the sky doesn’t look like it can hold any more fireworks, more start exploding. More underwater projections and images of the Na’vi inhabitants fill the entire castle.

Right before the grand finale, the silhouette of a giant Tulkin appears from the bottom of the castle and swims up towards the top before disappearing. Moments later, the music ends as the sky is lit with a barrage of pyrotechnics.

Just when you think it’s over, the haunting music heard at the start plays again as the castle goes back to blue. “Avatar: The Way of Water” is projected onto the castle first in Chinese and then in English. Ripples of water float across the castle as a guttural cry is heard. Moments later, one final series of fireworks appear in the sky, but this time they spell out “AVATAR.”

As brief as it is, the show is mesmerizing. It appears this was a one-time-only presentation for the premiere.

Check out the full show:

Shanghai Disney Resort has had a rough time staying open due to China’s “dynamic zero-COVID” strategy. The park, which had been closed since November 29, reopened last week.

Shanghai Disney Resort, including Shanghai Disneyland, is currently operating normally. However, some attractions, restaurants, and retail locations may not be available or may be operating at reduced capacity. The resort has also implemented pandemic control measures, and guests should check and strictly follow these measures.

Would you like to see this nighttime show at Walt Disney World and Disneyland? Let us know in the comments below.

Check out our other coverage on “Avatar: The Way of Water”: