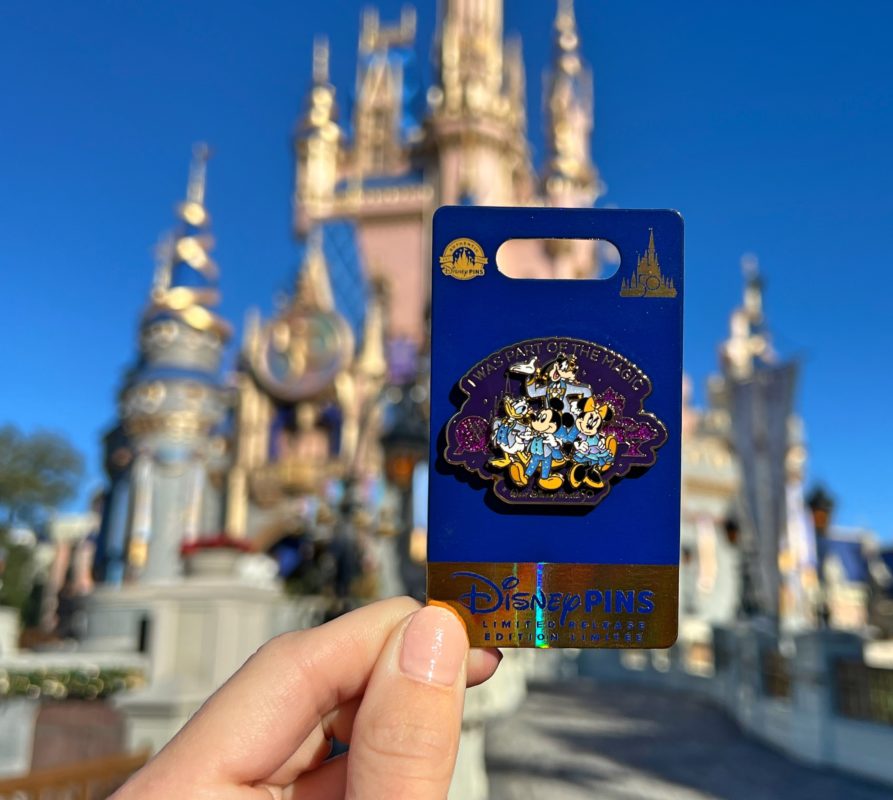 Although the 50th anniversary celebration of Walt Disney World is coming to an end, new merchandise is still being released. We recently came across this pin commemorating the occasion at Main Street Cinema on Main Street, U.S.A. in the Magic Kingdom. The pin reads ‘I Was Part of the Magic’ and is a great souvenir for anyone who was able to experience the celebration firsthand.

The limited release pin features Mickey Mouse, Minnie Mouse, Donald Duck, and Goofy dressed in their special 50th anniversary attire against a dark blue background. The park icons of Walt Disney World can also be seen in the background.

Arching over the Fab Four is “I Was Part of the Magic” in 3-D relief. At the bottom is “Walt Disney World 50.” The four park icons – Spaceship Earth (EPCOT), Cinderella Castle (Magic Kingdom), The Twilight Zone Tower of Terror (Disney’s Hollywood Studios), and the Tree of Life (Disney’s Animal Kingdom) shine in a reflective purple enameled cloisonné.

The pin is attached to a specially designed card with the anniversary celebration’s signature colors dark blue and gold.

The World’s Most Magical Celebration will officially end on March 31, 2023.

Is this 50th anniversary pin a must-have for your collection? Let us know in the comments below.

Check out some of our other recent merchandise stories on Walt Disney World’s 50th anniversary: