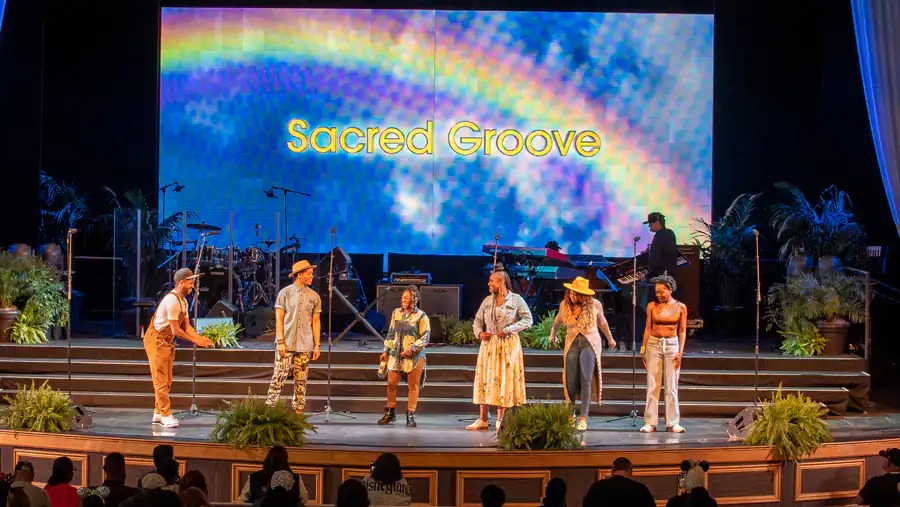 Disneyland Resort has announced this year’s Black History Month offerings as a part of “Celebrate Soulfully.”

A resort tradition for more than a decade, “Celebrate Gospel” returns to the Fantasyland Theatre at Disneyland park on Feb. 18 and Feb. 25, from 2:30 – 7:00 p.m. PT. This tribute to Gospel music showcases uplifting performances by award-winning Gospel music stars, recording artists, and community choirs – each sharing their own distinctive style.

During the month of February, the Downtown Disney District will offer family crafts, live music, and special offerings in honor of Black History Month. Kids and families can express their creativity with crafts inspired by Black heritage.

Lovepop will feature two cards designed in collaboration with talented artist Anthony Conley for Black History Month. Artists Ryan Riller and Larissa Marantz will be featured in artist showcases and signings from 11 a.m.-2 p.m. PT at Disneyana in Disneyland park on Feb. 25 and the WonderGround Gallery pop-up location in the Downtown Disney District on Feb. 26.

Each evening in February, you can dance and groove along to live musical performances highlighting genres such as R&B, Reggae, Funk, Motown, Jazz, Doo-Wop, and Gospel. The Downtown Disney LIVE! stage will host live bands nightly, with scheduled acts including LALA Brass, Forward Motion Band, The Rhythm & Blues Brothas, and more. On select weekend days, the festivities start in the afternoon with inspiring Gospel music performances by Sacred Groove and The Singers of Soul.

The Mood Indigo Group will fill the Great Hall of Disney’s Grand Californian Hotel & Spa with beautiful and energetic live Jazz each evening in February. At the Disneyland Hotel, overnight guests can paint an animation cel, with artwork of Princess Tiana from “The Princess and the Frog.”

Restaurants at the Disneyland Resort will celebrate Black History Month with limited-time menu items. From Feb. 9 through March 5, Black-owned food truck Wings ‘N Waffles will serve up delicious sandwiches, plates, and more near the building adjacent to Star Wars Trading Post in the Downtown Disney District.

A full guide of food will be available soon.

A new video, produced in collaboration with National Geographic, will debut in the lobby of the Main Street Opera House at Disneyland park, outside of “Great Moments with Mr. Lincoln,” bringing to life the story of the historic relationship between Frederick Douglass and Abraham Lincoln. Beginning Jan. 27, the video will be played between the busts and portraits of these two giants, recognizing their work together in the fight against slavery. The special presentation is narrated by Robin Roberts and features expert testimonials and the family of Douglass, an American advocate for freedom, justice, and democracy.

For a limited time beginning in mid-February at Hollywood Land in Disney California Adventure park, guests may encounter Moon Girl from the Disney Branded Television and Disney+ series “Moon Girl and Devil Dinosaur,” which debuts on Feb. 10 on Disney Channel and Feb. 15 on Disney+. The series follows the adventures of 13-year-old super-genius Lunella Lafayette and her 10-ton T-Rex, Devil Dinosaur, whom she accidentally brings through a portal into present-day New York City. They team up to make a difference and protect Lunella’s Lower East Side neighborhood from danger.

More Excavation Underway at Journey of Water Inspired by 'Moana' at EPCOTFebruary 21, 2022
REVIEW: Greece Gyro is Okay But Not Worth the Odyssey at the 2022 EPCOT International Food & Win...July 14, 2022
New Figment Imagination Institute Ear Headband Arrives at EPCOTOctober 15, 2022