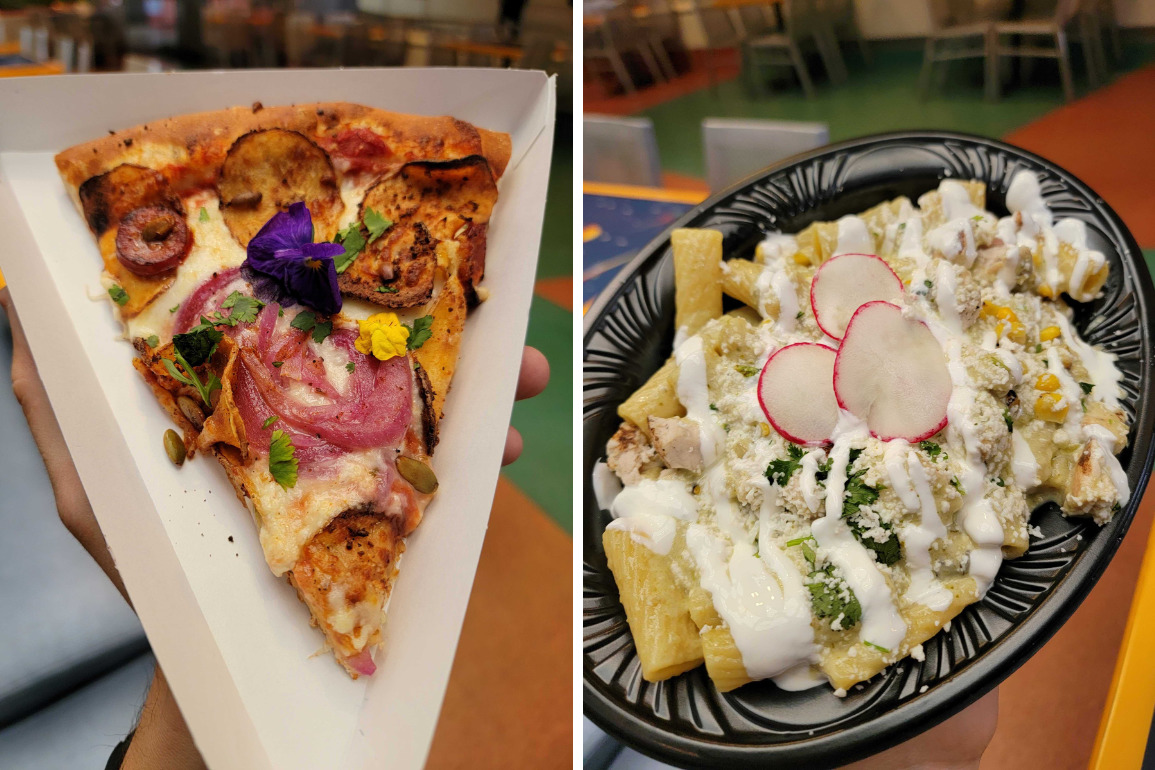 A pair of new items have made first contact at Alien Pizza Planet in Disneyland, mashing up Latin and Italian flavors. But is this worth a close encounter? Let’s find out!

This Chorizo con Papa Pizza slice can be summed up in one word: underwhelming.

The roasted potatoes are so similar in flavor to the crust that they’re completely lost, leaving only a few scattered pieces of sausage and some onions too lend any kind of uniqueness to this otherwise commonplace cheese pizza slice.

Whereas the charcuterie pizza slice, a specialty pizza that was on the holiday menu, had a lot going on and was very unique and interesting, this one has remarkably less going on, which makes it unimpressive and forgettable.

This sounds like a terrible idea on paper. We were dreading having to eat this. But surprisingly and thankfully, we were wrong. This is actually very enjoyable!

Translating the dish from tortillas to pasta and still keeping the same soul and flavors of the original dish must have been no small feat. Not only does it work as a replacement for a traditional enchilada, it also somehow works as a pasta dish. The salsa has become a thicker sauce that works well to coat the pasta in the chicken together.

It does have a touch of spice which builds as you work your way through the dish, but it’s not unpleasant for someone who likes a little heat. Overall, we were very glad that this is so much better than we anticipated. This one’s worth landing at Alien Pizza Planet for! Pick this over the Chorizo con Papa Pizza.

Alien Pizza Planet is located in Tomorrowland at Disneyland park, near Space Mountain. It occupies the space formerly inhabited by Mission to Mars. The attraction closed in 1992 to make way for Redd Rockett’s Pizza Port. It became Alien Pizza Planet during Pixar Fest in 2018, and then remained as a permanent fixture. The venue offers indoor and outdoor seating.

It serves Italian food, including pizza, pasta, and salads. A popular staple is the Alien Macarooooons, which rotate with seasonal flavors and decorations. The current Alien Macaroooon is almond with blackberry and lemon curd filling. The restaurant typically opens at 10:00 a.m., but the closing time varies based on park hours.

Chalk Full of Characters Returns With New Sorcerer Mickey, ‘The Sword in the Stone,’ and ‘Bao’ Characters at 2023 EPCOT International Festival of the Arts