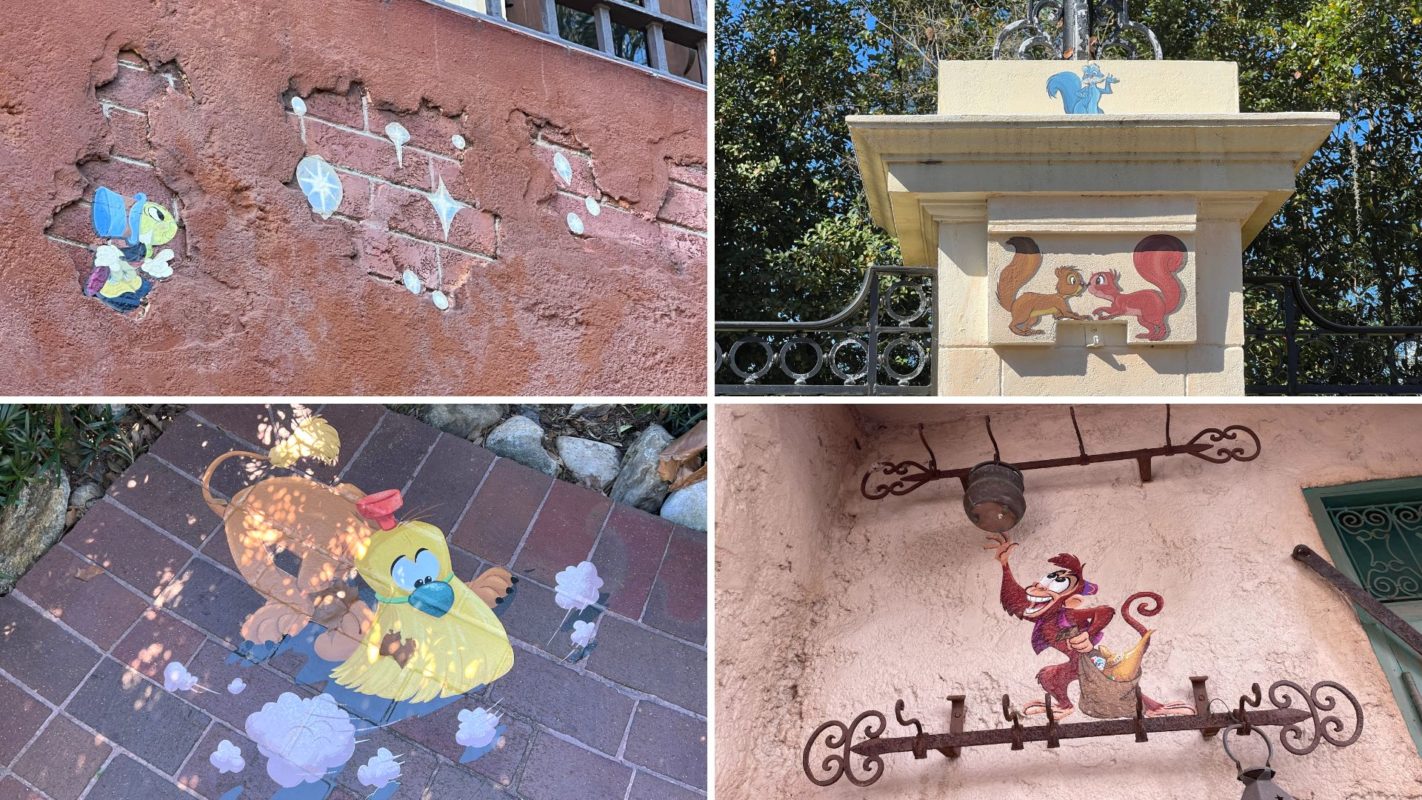 Chalk Full of Characters is back with new characters at the 2023 EPCOT International Festival of the Arts. Guests can participate in a self-led scavenger hunt to find various “chalk” character decals throughout World Showcase (plus one near the Imagination Pavilion).

2023 EPCOT International Festival of the Arts – Chalk Full of Characters

A sign for Chalk Full of Character(s) is on the World Showcase bridge.

New this year is a Sorcerer Mickey decal directing the reverse waterfall outside the Imagination Pavilion.

Mickey stands on a pile of rocks, and a mop carries a bucket of water behind him.

There are two decals on the front of the temple of the Mexico Pavilion.

On one side of the entrance is Dante from “Coco” in his regular dog form.

On the other side is Dante as an alebrije.

“Frozen” characters are hiding in the Norway Pavilion.

“Snowgies” are causing mischief on the side of this building, not far from the Royal Sommerhus.

The outdoor fireplace behind Kringla Bakeri Og Kafe is hiding a “Frozen 2” friend.

Bruni is enjoying his pink flames.

Little Brother from “Mulan” can usually be found in the China Pavilion but was not yet installed when we visited.

Multiple versions of Pascal can be found hiding in the Germany Pavilion.

Firstly, Pascal is grabbing some popcorn on the wall outside Karamell-Küche.

Can you see Pascal near the entrance to Volkskunst Clock and Crafts?

He’s blending in with the words.

Machiavelli, Luca, Alberto, and a little purple crab are around the water fountains outside the Italy Pavilion.

Jiminy Cricket is beneath a balcony nearby.

New this year are the sparkling stars that he’s looking up at.

Outside the Art of Disney Store, Amos from the short “Ben and Me” can be seen flying a kite.

Duffy and Gelatoni are painting on the beams of a wall outside Mitsukoshi.

It looks like Abu is about to steal a pot from this corner of the Morocco Pavilion.

Lumiere is in a new location near the theater of the France Pavilion.

He’s lighting a lamp above the “Beauty and the Beast Sing-Along” and “Impressions de France” posters.

The U.K. Pavilion has the most characters, including some new ones.

In the hedge maze, guests will discover the broom dog from “Alice in Wonderland” sweeping the bricks.

On two pillars at the edge of the maze are some squirrels.

The blue one is Merlin, while the light brown one is Wart from “The Sword in the Stone.”

They are joined by two lovestruck red squirrels.

Robin Hood, Little John, and Skippy are on this wall behind The Tea Caddy.

Finally, Peter Pan’s shadow is peering into a window.

Another new chalk decal can be found within the Canada Pavilion, above these rounded windows.

It’s Bao from “Bao,” which takes place in Toronto.

Meilin Lee in her red panda form is on a rock wall near the pavilion’s Kidcot Fun Stop.

Down by the stream is Koda from “Brother Bear.”

Chalk Full of Characters is not a scavenger hunt like Figment’s Brush With the Masters, so there’s no cost and no prize. It’s just hidden details to spot for fun on your journey around EPCOT.

What is your favorite chalk character? Let us know in the comments, and check out the EPCOT International Festival of the Arts food studio menus.

1 thought on “Chalk Full of Characters Returns With New Sorcerer Mickey, ‘The Sword in the Stone,’ and ‘Bao’ Characters at 2023 EPCOT International Festival of the Arts”