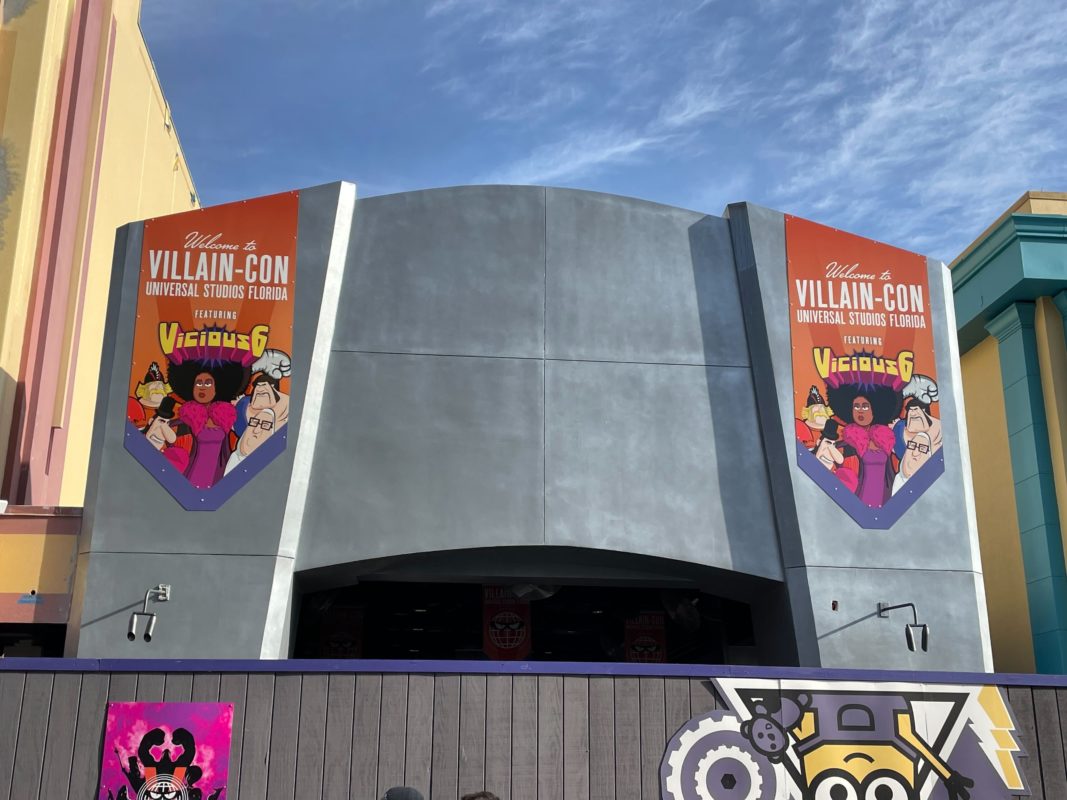 Get ready for more Minions! There are a lot of changes happening around the front of Universal Studios Florida as the area transitions from Production Central to Illumination Avenue. The new Villain-Con Minion Blast attraction and Minion Cafe will be opening this summer and construction seems to be ramping up. We spotted a few new decorations added to the queue of Villain-Con and some additional steel structure taking shape at the Minion Cafe. Take a look at the latest progress on these two projects.

Villain-Con banners were hung at the entrance of the new attraction a few days ago. Since then, purple borders have been added to the bottoms of the two banners.

In early December, Universal officially announced that Universal Studios Florida would be getting a Minion-centric area called Illumination Avenue with the additions of Illumination’s Villain-Con Minion Blast and Minion Café. The attraction will take over the Shrek 4-D building, while the café takes over the Monsters Café spot.

Just over the tops of the construction walls, we can see bright orange Villain-Con banners hanging in the queue. These also have purple borders at the bottom, similar to the signs on the entrance. These banners feature the Villain-Con globe logo with a “V” shape in the background. “Villain-Con Universal Studios Florida” is written along the top and the globe has some shifty-looking villain eyes in a mask. We like that the signs are specific to this park and not just “Universal Studios”.

A sign has been added to the corner of the Villain-Con Minion Blast construction walls directing guests to other guest areas.

The walls for Minion Café have been moved forward, narrowing this alleyway between the two construction sites. There’s a lot to do before the opening this summer!

The pathway was closed off while some work was happening in the area, but a Team Member was at the alley entrance to help direct guests.

Steel supports have been added around the café building, apparently to extend it. All three sides of the building are expanding outwards, so it seems like this might be even bigger than Monsters Cafe.

There are a few more steel supports behind the wall in the alley.

Behind this grid, paneling has been stripped from a wall of the café. Most of the wall leading down the alley was demolished weeks ago, leaving the empty interior exposed just over the tops of the construction walls.

The new structure towers over the old walls of Monsters Cafe. Minions are certainly taking over and making their presence known here.

Another steel structure is at the old Monsters Café entrance.

The rounded marquee of Monsters Café was destroyed and this new structure has overtaken its grave. We can only hope it’s haunted.

It looks like it could be a new entrance awning or ceiling, but with construction moving this quickly, we won’t have to guess for long. Be sure to stay tuned for updates!

And if you’re still nostalgic for Shrek 4-D, check out our photos and video from its final night over a year ago.

Minions are taking over Universal Studios Florida and both of these new locations will open sometime this summer. What do you think of the addition of more Minions around the Universal Orlando Resort? Let us know in the comments and be sure to follow for more updates!