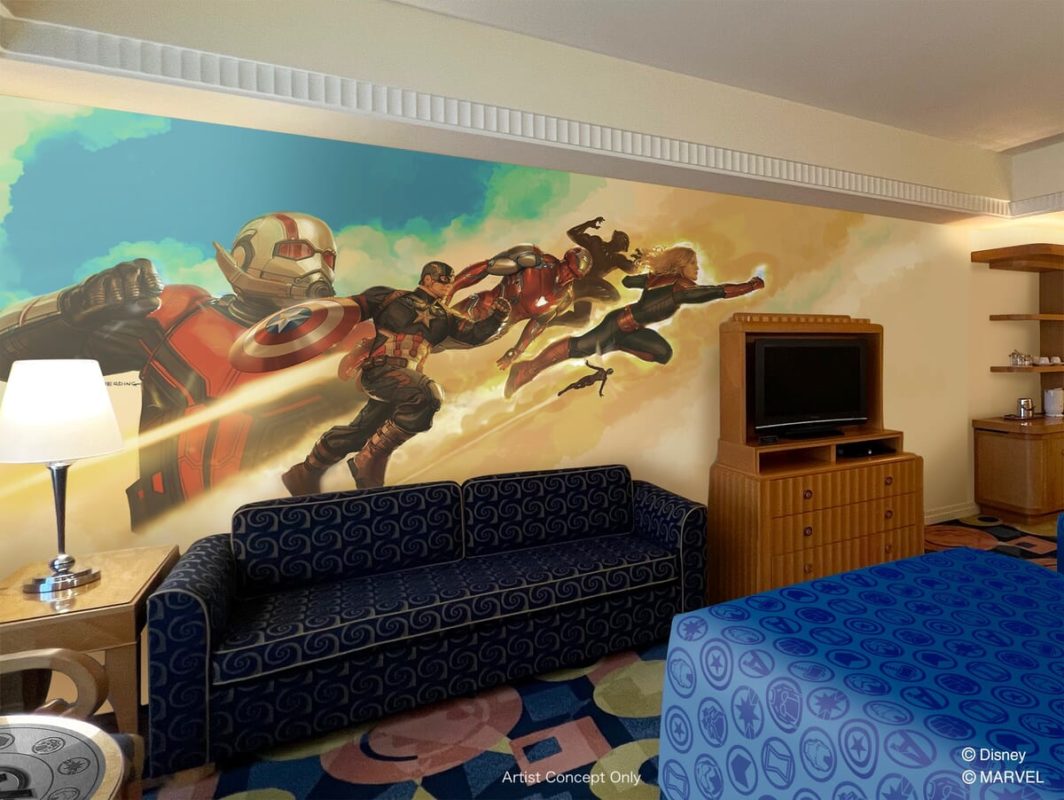 Unlike the other five Disney resorts around the world, Tokyo Disney Resort has entirely stayed away from Marvel and its characters, with no character presence, no merchandise, no anything from the iconic comic book franchise having ever been available — until now. Starting next month, guests staying at the Disney Ambassador Hotel can enjoy a new Marvel-themed room for a limited time!

For stays from February 2 to August 31, 2023, guests can select the new Marvel Special Room — Avengers: Heroes United. The new room features special furnishings and artwork which gives the impression of the iconic heroes.

Front and center in the room are the beds, which feature a special bed runner and skirt with the symbols of different Avengers heroes including Iron Man, Captain America, Black Panther, and more.

A large mural covers the other side of the room, which features Iron Man, Captain America, Ant-Man, Wasp, Black Panther, and Captain Marvel.

A special decorative pillow is also on each bed with Captain America’s shield on one side, and on the back bearing the Marvel logo and Disney Ambassador Hotel wordmark. Guests are free to take this pillow home as a souvenir of their stay.

There’s also a special room key with the Marvel logo to commemorate, which guests are also free to keep.

Postcards are also given out, as is tradition at the Tokyo Disney Resort hotels.

Complimentary Disney+ access will also be given to guests during their stay through the hotel TV.

As Disney does not own or operate the Tokyo Disney Resort, the Oriental Land Company has been free to do as they please with what they choose to integrate into the resort, with no Marvel presence and hardly any merchandise or food in recent years for Star Wars despite Star Tours being a fixture of the park since 1989. While nobody can say for sure the reason why Marvel is not integrated into the parks here, the low box office turnout for most Marvel films in Japan is a likely culprit. Only two MCU films have ever finished in Japan’s top ten grossers of the year — “Avengers: Endgame,” and “Spider-Man: No Way Home,” according to Box Office Mojo‘s annual statistics.

There are numerous other themed rooms at the Disney Ambassador Hotel, which often sees lower occupancy than the other Tokyo Disney Resort hotels. Other themes include Mickey, Donald, and Chip ‘n’ Dale, the latter of which we recently stayed in!

Are you excited to see Marvel finally come to Tokyo Disney Resort if in a small way? Let us know in the comments below!

Blizzard Beach Closing Due to Low Temperatures This Weekend