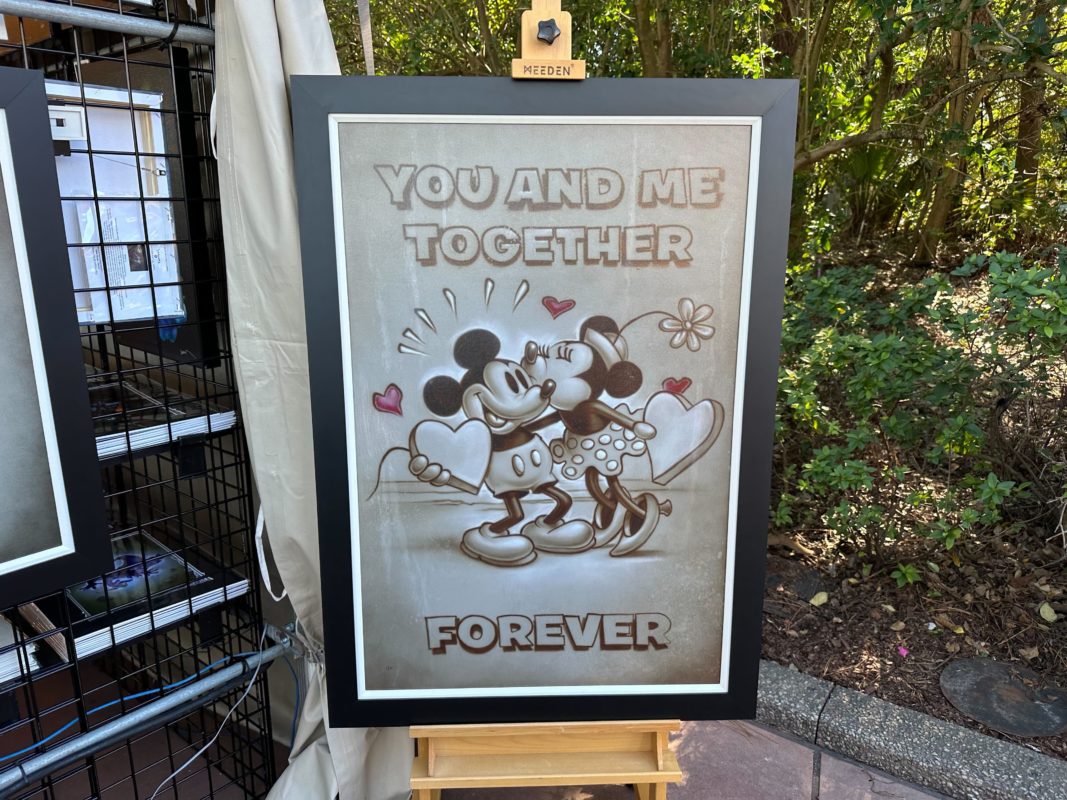 Noah Fine Art is back for the 2023 EPCOT International Festival of the Arts. The booth is known for Noah Elias’s detailed paintings of Disney characters, and this year’s no exception!

The kiosk can be found in the Japan Pavilion. There are both parks related pieces and Disney character art.

There are options for the “Star Wars” fans also.

Elias revealed a number of new pieces on the studio’s Facebook page. “You and Me Together Forever” depicts Minnie kissing Mickey Mouse, who’s pleasantly surprised by the gesture. The pair are shown in their classic grayscale cartoon style. Each of them is holding a heart, while red hearts accent the image. In the Facebook post, Elias noted that the piece was inspired by his marriage to his wife. For a special Valentine’s Day gift, Elias can put a couple’s names in the hearts.

For those who prefer villains to valentines, there’s “Your Voice is Mine.” The painting shows “The Little Mermaid’s” Ursula clutching something glowing in her hands, presumably Ariel’s voice. The glow produces an eerie backlit effect, which only makes her grin all the more sinister. According to Elias, the intent behind the piece “was to create an underwater atmospheric energy and glow that would amplify her emotion and obsession with Ariel’s voice.”

“Evil Intent” is an acrylic on canvas piece that features Maleficent. She’s shown in shadow, with only purple, green, and gold flashes alluding to her transformation into a dragon.

“Our Daily Routine” shows Mickey and Pluto taking a walk in a sepia-toned image. Offering a throwback style paying homage to Mickey’s early years, Elias says his “hope was to capture the special bond we have with our dogs and the daily routine we have taking walks together.”

Which piece is your favorite? Sound off in the comments, and keep reading WDWNT for more coverage of the EPCOT International Festival of the Arts!

The Art of David E. Doss Brings Walt Disney World-Inspired Art to the 2023 EPCOT International Festival of the Arts