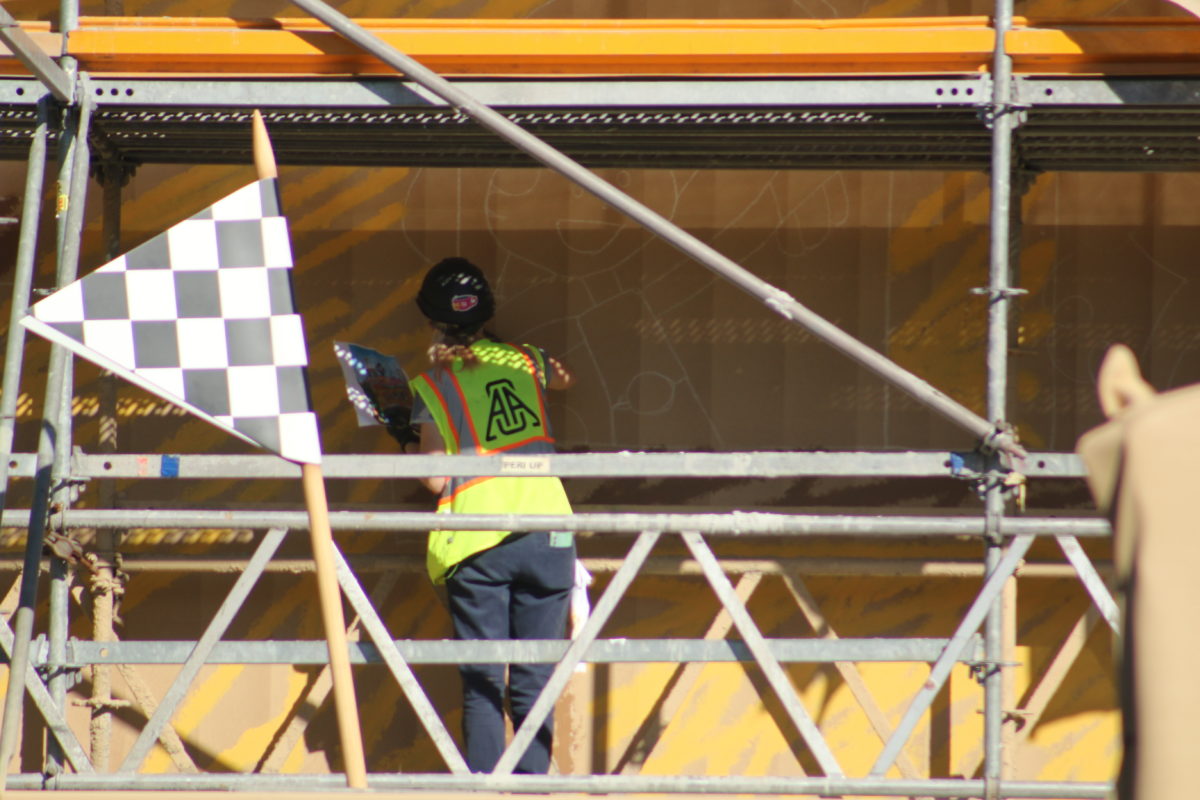 We walked up to the Disney’s Hollywood Studios entrance sign to notice that all of the holiday decor has now been removed. We’ll miss you, Santa Gertie!

Three new pins arrived at The Darkroom. MARVEL Ant-Man, Avengers, and a limited release Stitch and Angel Hanukkah 2022 pins are now available. The Ant-Man pin is $9.99, the Avengers pin is $12.99, and the Hanukkah pin is $17.99.

A quirky new Minnie Mouse beaded hat has hit the shelves at Celebrity 5&10. Mickey-shaped beads in pastel shades decorate the ears, and a beaded bow sits in the center of the cloth hat.

Celebrity 5&10 has a new Walt Disney World 2023 keychain out for $14.99. The keychain features a leather “Walt Disney World” on one side and “2023” on the other with metal Mickey, Minnie, Spaceship Earth, and Cinderella Castle charms.

The new Garden Goodness and Fruity Finds Munchlings series also arrived at Celebrity 5&10. There’s even a giant Acai Bowl Angel plush out that has Angel in a coconut bowl with a blueberry and strawberry on top.

Keystone Clothiers has a fun and colorful new Spider-Man hat in the MARVEL section. Two pins are on this teal hat with a cityscape in the background. You can take the hat home for $29.99.

The new Donald and Daisy Valentine’s Dooney & Bourke Collection arrived at The Majestic. The duo is the perfect pair for the new handbags with pink and red hearts.

Tower Hotel Gifts has a new Disney Princess Designer Doll, Ariel. She has a long flowing purple dress and gold handbag for $129.99.

Rock Around the Shop has a new “Live Life Loud” white and blue pullover and Rock’n’Roller Coaster youth holographic shirt. We recently found the attraction’s new Loungefly backpack still stocked on the shelves.

For The First Time in Forever: A Frozen Sing-A-Long closed today for refurbishment.

A fancy purple Star Wars logo hat is at Tatooine Traders. The hat is brightly colored and has Star Wars printed near the brim and on top of the hat for $29.99.

A very reflective notebook is now at Resistance Carts near Star Wars: Rise of the Resistance. The hardcover of the notebook has a metallic silver casing, and the inside has the Rebel Starbird and X-wing ships for $24.99.

Need a tote? No, a backpack! Well, now you can have both. Droid Depot has a new navy and orange double-duty tote bag that can also double as a backpack. It also comes with a clear keychain pouch for $59.99.

There is more construction occurring at the top of the building that is near the exit of Toy Story: Midway Mania and behind Woody’s Lunchbox. It appears as though they are working on the roofing for the future building.

Near Slinky Dog Dash, we spotted work happening on the exterior walls of Roundup Rodeo BBQ.

It appears as though artists are sketching and painting a few of our Toy Story pals on the exterior of the restaurant.

After a short break, we left Disney’s Hollywood Studios and stopped over at EPCOT to see the new International Festival of the Arts menu boards out on display in front of a few of the food studios.

Craftsman’s Courtyard, which sits across from Creations near Test Track, was the first menu we spotted.

The 2023 festival decor looks colorful and bright on the other side of the rolling menu board.

The opposite side has the festival map. Here, you see a list of all the food studios, artists, merchandise, and entertainment to expect.

We found other menus like Gourmet Landscapes near Canada and POP Eats near the World Showcase promenade walkway.

There is now a directional sign featuring the Henna artist that returned to the Morocco pavilion earlier last week.

The walkway from Imagination! Pavilion towards Creations has part of its construction walls framed off for the “Drawing on Inspiration” murals soon to come for the festival.

Back in Creations, we found a whimsical yellow youth dress that is inspired by Snow White. Gold apples glitter on the flowy fabric. The dress is in the youth section for $49.99.

Over at Disney’s BoardWalk, we stopped by the future Cake Bake Shop to see how construction has progressed since the upper tower and lower building were gutted.

Construction began on the lobby at Disney’s BoardWalk Inn, fairly close to the new Carousel Coffee.