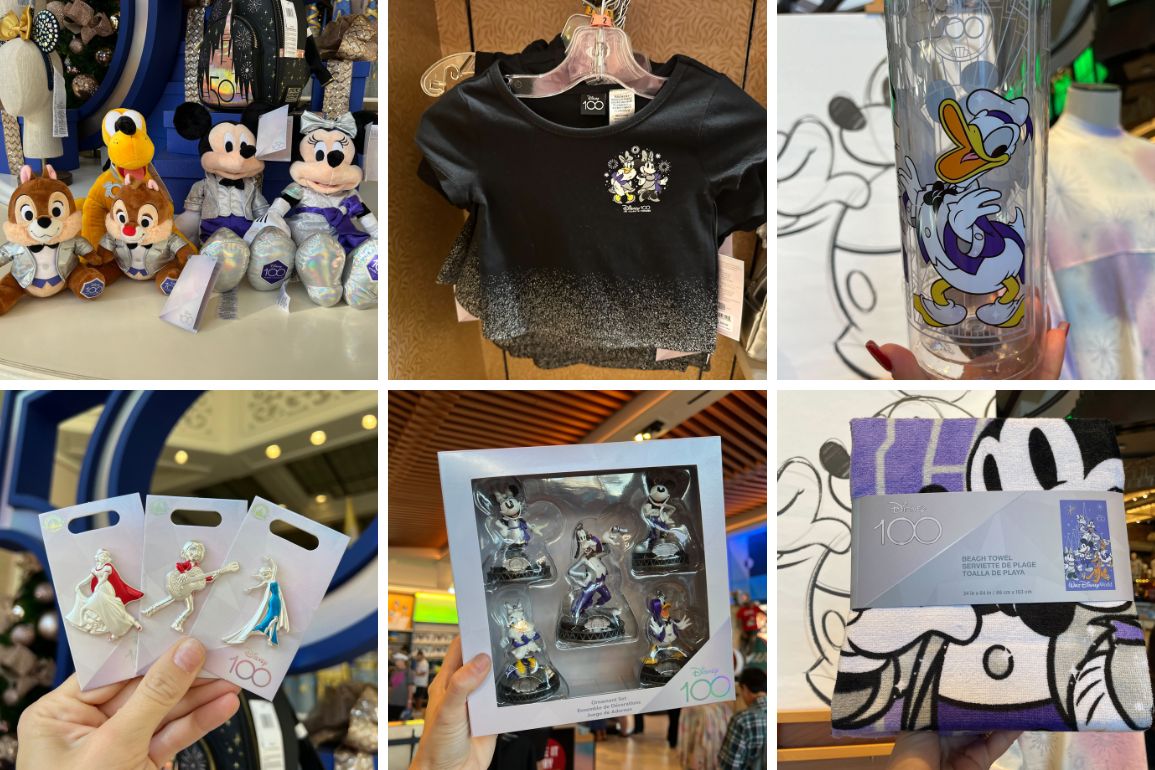 A white castle outline stands out from the signature purple that has been used to mark the 100th Anniversary celebration. Goofy tips his hat as each of the Disney characters celebrate the occasion in their platinum and purple formalwear.

The Walt Disney World Resort logo lines the bottom of the towel. Disney’s 100 Years of Wonder logo can be seen among fireworks and starbursts toward the top.

This absorbent terrycloth towel is printed on its top side only. The towel measures in at 64″ long and 34″ wide.

This commemorative Disney100 Beach Towel was found at World of Disney in Disney Springs.

Tinkerbell is seen flying above the castle while Mickey and the rest of his friends are showing off the white “100” logo seen throughout much of the collection. The characters adorn their silver and purple formalwear.

This large Disney 100 pin can be found at Frontier Trading Post in Magic Kingdom. It has a limited edition size of 4,000.

The Disney100 Ornament Set is part of the Sketchbook Ornament and Disney 100 Celebration Collections and was found at Creations Shop.

The bottle is made from double-walled plastic and holds 20 ounces of your favorite beverage.

The Walt Disney World Resort logo is also screen-printed in white on the side of the water bottle.

Mickey points to his chest as he proudly dons his 100th Anniversary celebration outfit.

Goofy offers a tip of the hat in his sparkly platinum and purple formalwear.

Donald, too, throws his hands up in excitement for the anniversary.

Art Deco-styled designs surround the characters. We found this water bottle at World of Disney.

An assortment of character pins have been spotted as part of the Disney100 excitement. They are each “platinum,” with one color highlighted.

Snow White offers a curtsy, Miguel plays a song on his acoustic guitar, and Elsa casts out the cold in these three pins.

Moana is looking fierce next to Minnie, who adorns her signature red bow. Donald looks dapper in his classic blue sailor uniform.

Of course, it’s Dumbo’s ears that are highlighted in his Disney100 character pin. Alice and Tinkerbell don their signature blue and green, respectively.

Chewbacca is silver with his bandolier in brown. Winnie the Pooh appears to be rubbing his tummy underneath his red t-shirt. Grogu, of course, is green.

Mulan is ready to attack in green. An orange Nemo swims out from between anenome, while Woody gives out a “Howdy, partner” in his yellow plaid shirt.

A playful yellow Simba gives way to a proud Mickey in his iconic red shorts. Tiana’s bow and dress stand out in green.

We found all of these Disney 100 pins at the Emporium in Magic Kingdom.

Mickey and Friends are ready to celebrate in style with this collection of Disney100 plushes. Mickey, Minnie, Pluto, and Chip n’ Dale were all spotted in their platinum and purple. A Disney “100 Years of Wonder” emblem is on each character plush.

Mickey sports a metallic tuxedo jacket and shoes and satin purple pants with stripes on both sides.

Mickey measures a bit taller than one foot. The back of his curtailed tuxedo jacket is embroidered with fireworks and starbursts.

Not to be outdone, Minnie Mouse is also serving up 100th Anniversary vibes in a matching Disney100 outfit.

Minnie wears a platinum dress with a purple bow.

Like all the plush in this collection, she has a hexagonal Disney 100 Years of Wonder emblem on the bottom of her left foot.

Pluto has a silver collar with a sparkling 100 tag.

All of the plush can be found at the Emporium.

Your little one can get in on the 100 Years of Wonder celebration with this t-shirt featuring Daisy and Minnie in their celebratory best.

The shirt is black with a glittery “platinum” bottom.

Minnie and Daisy are dressed in their shimmering platinum costumes.

The Disney 100 logo is on the inside tag.

Across the upper back of the shirt is Walt Disney World lettering in puffy paint, similar to a Spirit Jersey.

The bottom back of the shirt is just as sparkly as the front.

“Platinum” pixie dust is sprinkled throughout the bottom of the shirt, front and back.

This youth t-shirt can be found at the Emporium.

Characters are scattered throughout the skort, surrounded by the Disney 100 logo and starbursts amid a silvery, holographic background.

Beneath the outer “skirt” are built-in shorts. The outer skirt is gathered to look like a bow.

The shorts are the same material as the outer skirt in the pattern.

In this close-up of the skort, we can more clearly see Mickey, Minnie, Chip and Dale, Goofy, and Pluto.

The back of the skort is flat, and the design repeats all around. The Disney 100 Youth Holographic Skort can be found at Creations Shop in EPCOT.

The Walt Disney World logo, in “platinum” puffy lettering can be found down the left sleeve of this purple sweatshirt.

Mickey is found front and center. He is embroidered in his 100th celebration best. The Disney 100 logo is below, and Mickey sits against an art deco frame.

Mickey and Friends are gathered in front of Cinderella Castle in on the back of the sweatshirt.

Stars and fireworks surround our friends as they celebrate this milestone. We found the Disney 100 youth hoodie at Creations Shop in EPCOT.

Too cold for a skort? Pair your new youth hoodie with these joggers.

An embroidered Mickey with the Disney 100 logo can be found on the left front side of the joggers.

An elastic waist and elastic cuffs complete the joggers. The Disney 100 youth joggers can also be found at Creations Shop.

You can match your little one with these Disney 100 adult joggers.

The adult joggers have an elasticized, drawstring waistband. Mickey is embroidered on the upper left side of the jogger.

The Disney 100 Years of Wonder logo is in three-dimensional platinum down the right leg of the jogger.

On the adult version of the jogger, there is a slat pocket on the upper right back. The Disney 100 Adult joggers can also be found at Creations Shop.

Will you be adding any of these new Disney 100 commemorative items to your collection? Let us know in the comments below.

Check out some of the other previously announced Disney 100 merchandise we reported on: