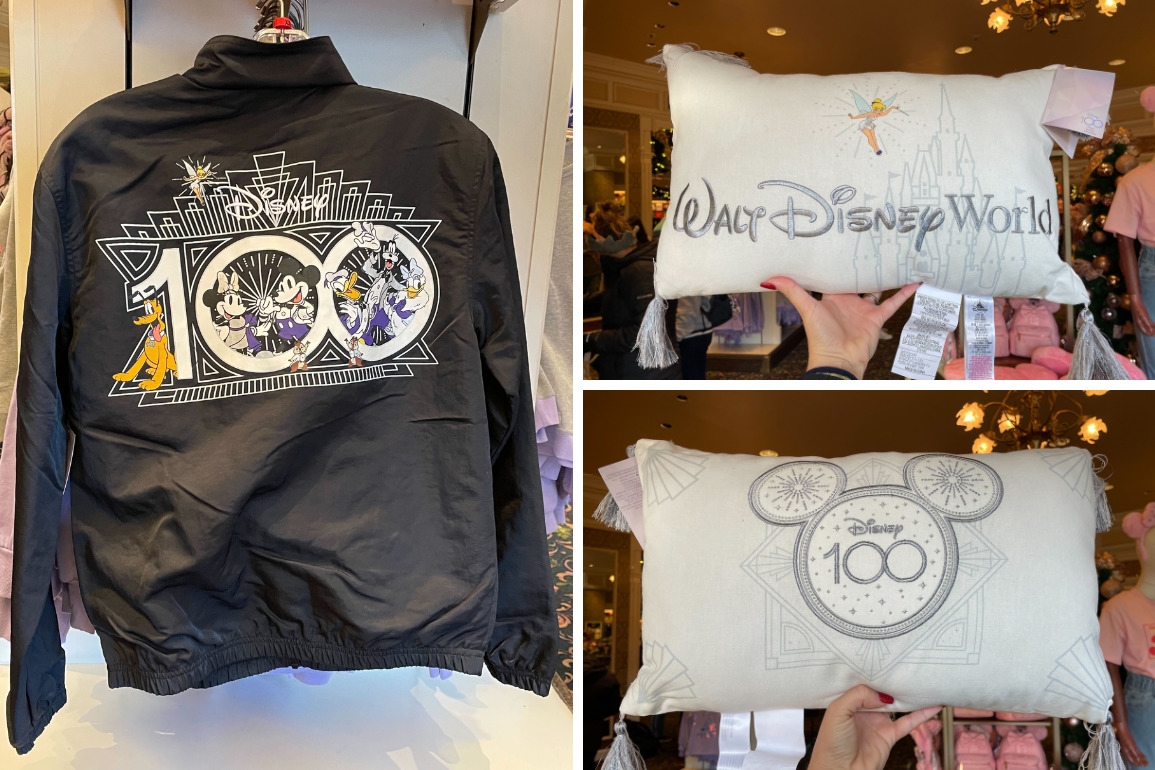 Two more items in the Disney100 line, celebrating the 100th anniversary of the Walt Disney Company, have arrived at Walt Disney World. We found a new jacket and throw pillow in the Emporium at Magic Kingdom.

Florida’s current cold front has jackets and sweaters front and center in the Emporium. The new Disney100 jacket is a black windbreaker with a zip front. There are two large pockets.

On the front left breast is an Art Deco style frame with Mickey Mouse in the center. He’s dressed for the platinum anniversary in a silver tailcoat and purple shorts. This is a variation on the new costume we’ve seen for Mickey (though it’s currently unknown if they will appear at Walt Disney World).

The sleeves have fitted elastic cuffs.

The hem is also elastic.

The back of the jacket has the large Art Deco Disney100 logo.

The geometric framing and the large “Disney 100” are in white. Mickey and Friends appear in their special anniversary outfits.

Pluto has a platinum and purple collar with a “100” tag.

Mickey is in his tailcoat again, while Minnie sports a silvery dress and bow with a purple belt. Chip and Dale are in matching tailcoats as well.

Tinker Bell, in her own special silver dress, is above the Disney logo.

This Disney100 pillow is Walt Disney World specific, with the resort’s logo embroidered in silver across a silhouette of Cinderella Castle. Tinker Bell, in her silver dress, hovers above the castle.

The other side has Art Deco fan-like designs at each corner, which are adorned with silver tassels. Unfortunately, the tassels were starting to fall to pieces on the pillows we saw in the store today.

A large Mickey icon is embroidered in silver against the decorative framing. “Disney 100” is in the center, while each ear features a burst of silver stars and shapes reminiscent of fireworks.

Check out the other Disney 100 merchandise we’ve found at Walt Disney World:

The 100th anniversary celebrations officially kick off as part of New Year’s Rockin’ Eve and then really get started on January 27 at Disneyland Resort. Walt Disney World and the international Disney Parks will also join the festivities throughout the year.

There is also the Disney100: The Exhibition coming to Philadelphia’s Franklin Institute. And plenty of merchandise will be available outside the parks, including food, LEGOs, an Oswald collection by Givenchy, and more.