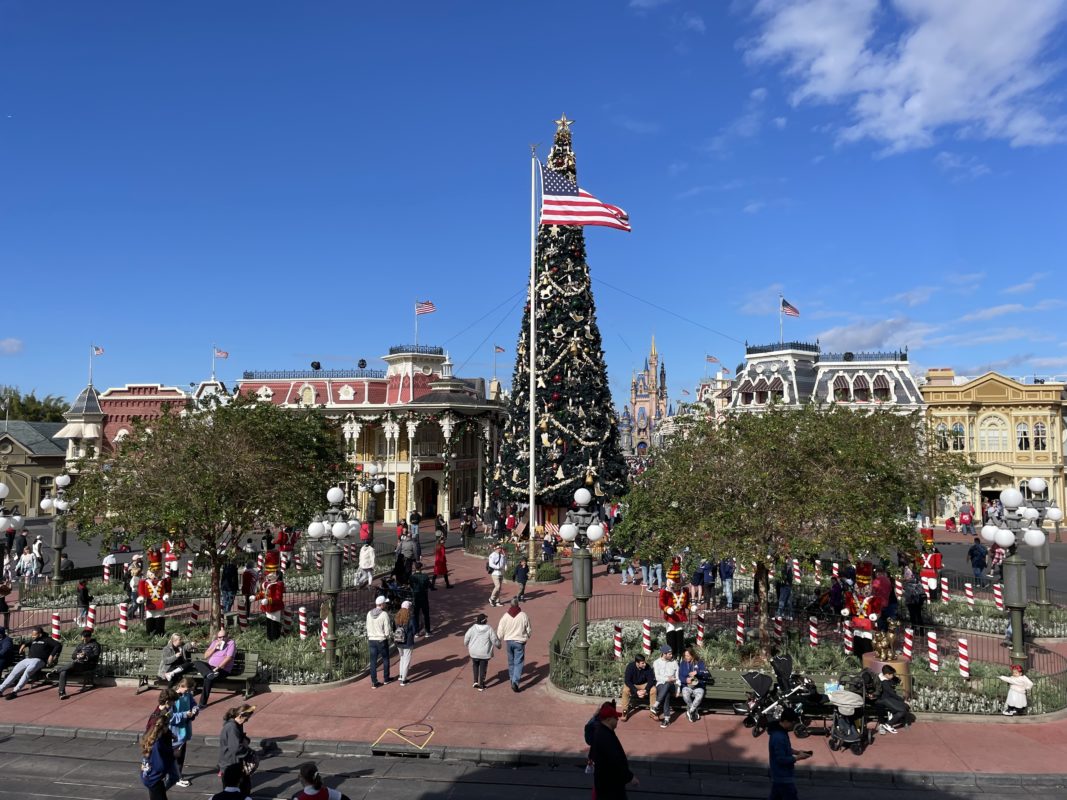 Happy Holidays! We’re celebrating with a few Christmas miracles all in one day. Join us on the Walt Disney World Railroad for the first time in four years and at the newly reopened The American Adventure at EPCOT. Let’s get going.

When we walked into Magic Kingdom, we were delighted to see the Walter E. Disney engine at Main Street, U.S.A. station. We knew it was time to jump aboard this iconic railroad for the first time in 4 years.

Around 10 a.m., after the media had their “special” preview, Cast Members invited guests up to the platform and to come aboard the Walter E. Disney engine.

The Main Street, U.S.A. railroad station reopened with the reopening of the Walt Disney World Railroad.

Guests can come up to the platform to get a beautiful backdrop for photos. This area is also open during the parade, with a small sectioned off spot for V.I.P Tours.

It’s time! We’re holding back tears as we climb aboard the Walter E. Disney engine. We were among the very first guests to take a full circle lap around the Magic Kingdom.

You can watch a full ride POV here.

You can even view the TRON Lightycycle Run construction from the train. A few cut out “windows” in the tunnel allow guests to see into TRON Lightcycle Run’s construction zone.

We were able to catch them testing trains.

Once we got off the Walter E. Disney engine, we bee-lined it for the PeopleMover. Time to check in on TRON Lightcycle / Run. While they are testing trains, there’s not much else happening on the ground.

We snapped a quick photo of Cinderella Castle while heading to grab a spot for the Christmas parade.

“Festival of Fantasy” is on hiatus until the new year, and “Mickey’s Once Upon A Christmastime Parade” is performing in its place.

This is the same parade that is normally performed at Mickey’s Very Merry Christmas Party.

As the day went on, the crowds continued to file in. “it’s a small world” was at a 60 minute wait. It’s time to park hop, and we’re heading to EPCOT.

Our source told us that The American Adventure would reopen from its refurbishment today, so, that’s the first place we headed. We were greeted by the Voices of Liberty – Dickens Carolers, singing holiday jingles.

We weren’t surprised to see that The American Adventure was open and ready to welcome guests.

The show has not changed since its revamp in 2018 but, all new carpet has been placed.

You can watch a full video of the queue and show here.

With Christmas only two days away, we can’t leave without chatting with Santa! Thanks for joining us today, and we’ll see ya real soon!