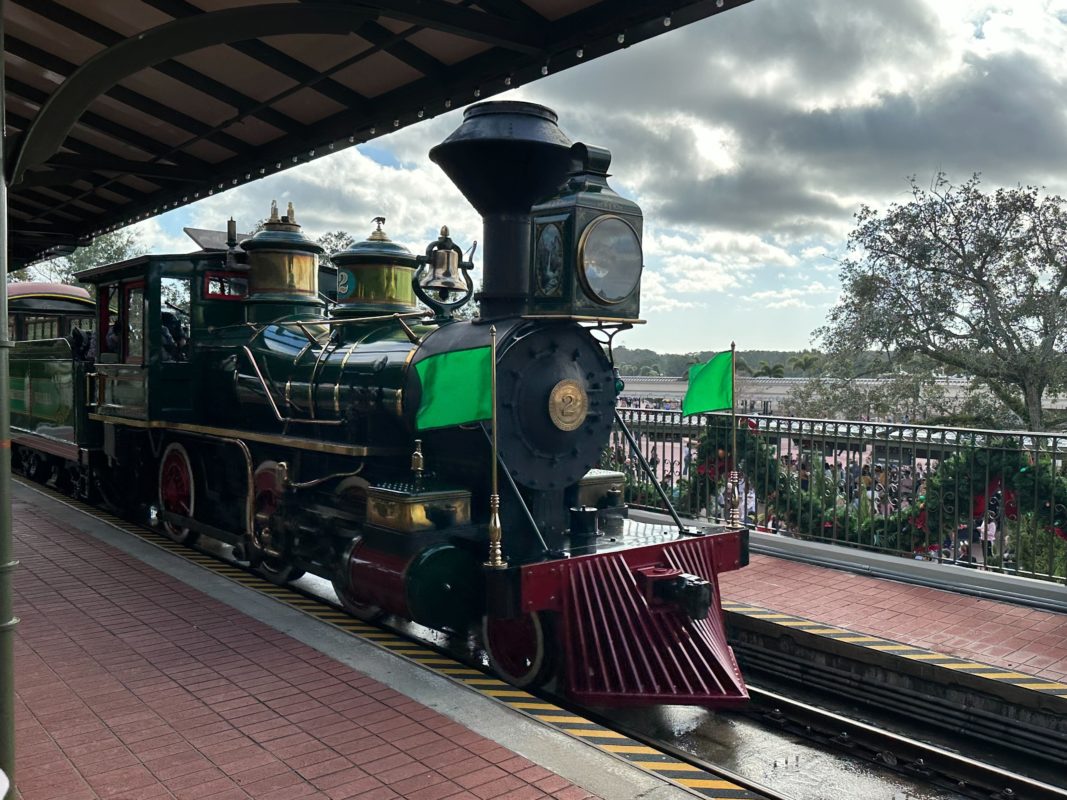 The Walt Disney World Railroad at Magic Kingdom has finally reopened after four years. We have a POV video of the full loop, including the new route through a tunnel beneath TRON Lightcycle / Run, and audio of the new narration. Watch and listen below then read on for photos and details.

All three of the Walt Disney World Railroad engines were refurbished during the closure. We saw the Walter E. Disney engine pull through the Main Street, U.S.A. station first.

The Walt Disney World Railroad closed in December 2018 for the construction of TRON Lightcycle / Run in Tomorrowland. During the closure, many of the train tracks were replaced.

Cast Members were all excited to see guests on the train again.

At first, most guests didn’t realize the train had reopened, so there wasn’t a long wait or a crowded platform.

The Lilly Belle then arrived but did not pick up guests.

Then guests started to realize the train was running and packed into the station. The Walter E. Disney engine returned. While we’ve seen the Roy O. Disney engine during testing, it was not running this morning.

We finally got to board the train and were off for a journey through Magic Kingdom.

Cast Members backstage waved as the train passed by.

The new narration still points out Splash Mountain, and “Zip-a-Dee-Doo-Dah” can be heard as the train travels through the ride. Splash Mountain will permanently close next month to be replaced with Tiana’s Bayou Adventure, and most other references to “Song of the South” have been removed from Disney Parks in recent years.

All three stations — Main Street, U.S.A.; Frontierland; and Fantasyland — are open and operating.

The tents of the village have been updated to be less colorful, but perhaps more historically accurate.

After Frontierland and Fantasyland, we traveled through the tunnel beneath TRON Lightcycle / Run.

Guests then get a view of Disney’s Contemporary Resort before returning to Main Street, U.S.A. Of course, you can exit or board at any station, not just on Main Street.

Are you excited to ride the Walt Disney World Railroad again? Let us know in the comments!