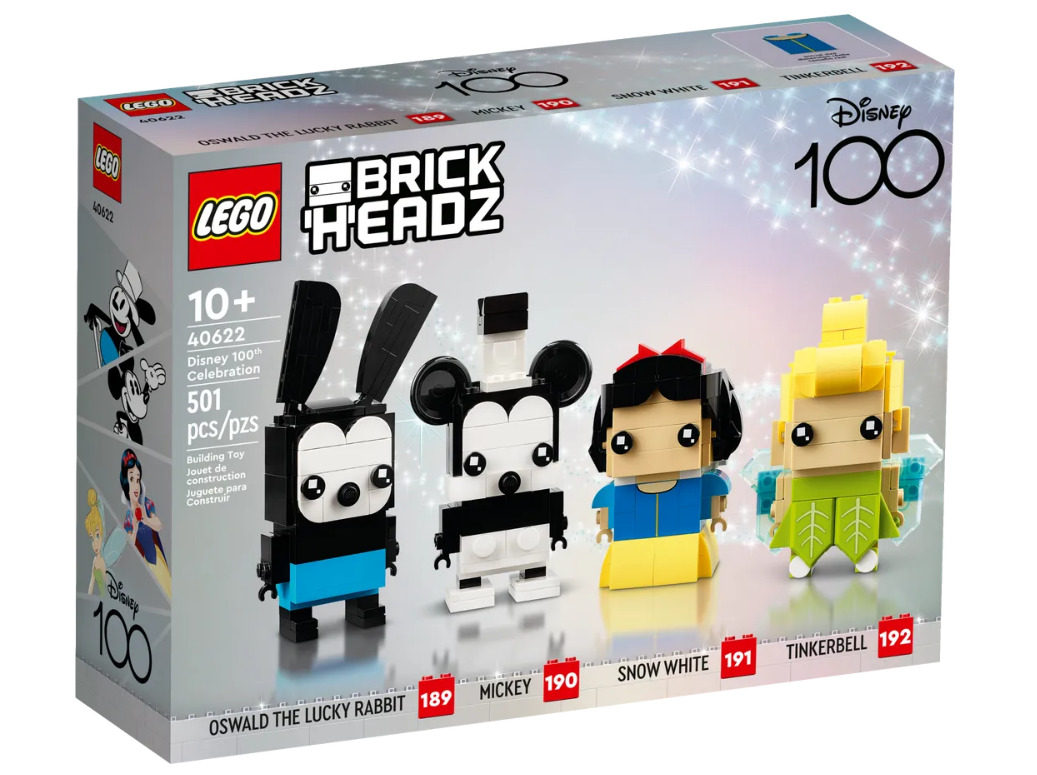 The first Disney100 LEGO set has been revealed, and a release date announced. The set is part of LEGO’s BrickHeadz line and will include four characters.

It includes individual baseplates for displaying each character. Oswald, Mickey Mouse, Snow White, and Tinker Bell all stand over 3.5 in. (9 cm) high. It will be available for purchase beginning February 1, 2023, on the LEGO website. Though unconfirmed, we expect it to be available on shopDisney as well (and possibly in the parks).

According to LEGO fansite Brick Fanatics, a teaser was released in an Australian catalog, as pictured above. It shows “a silver version of the pieces used for the Mad Hatter’s hat, the magic lamp from Aladdin, a bone possibly for Pluto, Donald Duck’s sailor cap, Woody’s hat, a teapot for Mrs. Potts and a bow either for Minnie or Daisy,” Brick Fanatics notes. These could just be marketing images tying the sets into the platinum-themed celebration, or they could be a preview for a future set.

The Australian ad also has two release windows listed, neither of which corresponds with the BrickHeadz release. Previous rumors also pointed to Disney100 minifigures, possibly in the form of a blind-bag series like the recent Muppets minifigure collection or previous Disney character collections.

Other rumored sets for the Disney100 celebration include another BrickHeadz set on May 1 (the characters are unknown, but it is speculated to include Walt Disney) and a large set with no rumored release date but a rumored price of $159.99. This set is reportedly a new castle. The current Disney Castle set is officially retiring soon.

There is also a rumored “Disney Birthday Train” set due for release on April 1, but it’s unknown if it will be connected to the 100th anniversary. The reported price is $39.99, which is only $10 more than the DUPLO Mickey & Minnie Birthday Train set currently available.

The 100th anniversary of The Walt Disney Company is underway, having begun with a surprise projection show at Disneyland Paris on New Year’s Eve. The next round of celebrations kicks off at Disneyland Resort on January 27 with the debut of Wondrous Journeys, World of Color – One, new platinum decor for Sleeping Beauty Castle, and more.

Check out some of the Disney 100 Years of Wonder celebration merchandise that is already available:

You can also shop a selection of the Disney100 merchandise online at shopDisney.