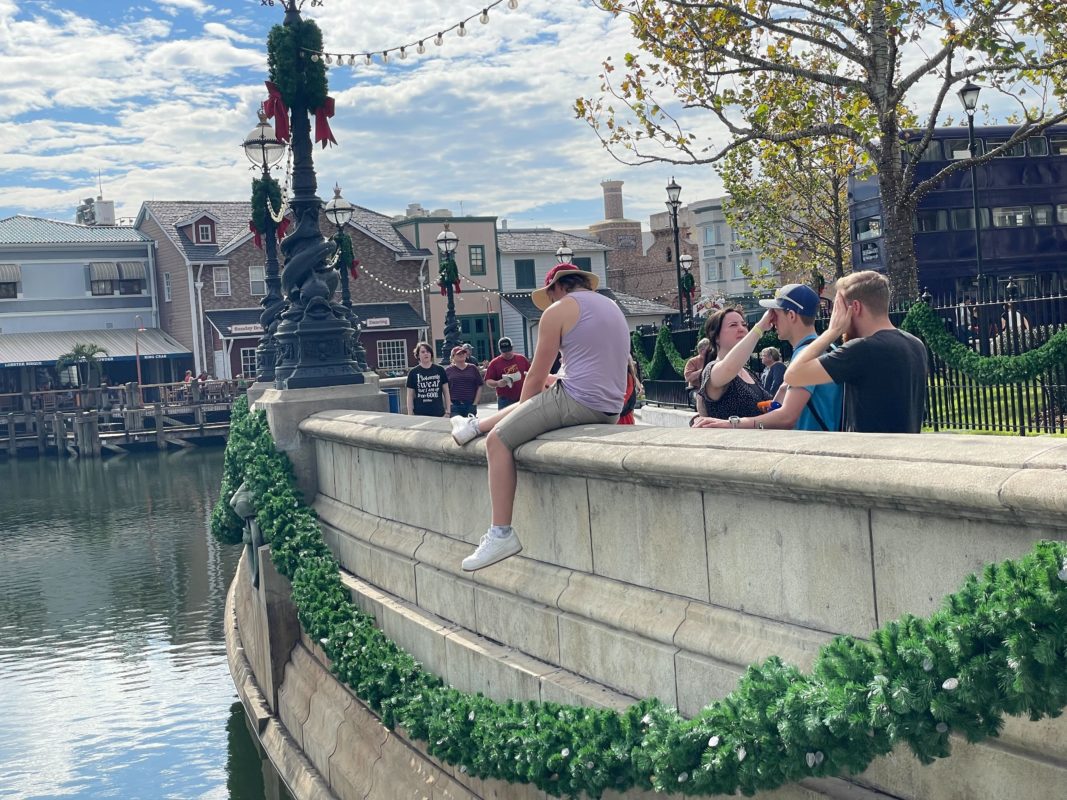 Welcome to another beautiful day here at the Universal Orlando Resort. We’re back and ready to check out what’s new before the New Year! Let’s get started over at Universal Studios Florida.

Inside the temporary Prop Shop at the Brown Derby Hat Shop, we were reunited with the old Monsters Café benches. It was a very short reunion since they were already sold and quickly taken away after we took a photo of them. Maybe we’ll meet again in another life. Goodbye, Monsters Café seats.

Luckily, a quick stop into the UOAP Lounge would cheer us up. There was a special treat for Passholders! Free churros were being handed out in front of the lounge. These surprise and delight moments are so much fun. The lounge will close soon to make room for the new Tribute Store, so next year, we’ll need to visit Islands of Adventure for the lounge.

A newspaper clipping has been added to the exit of the Tribute Store to hint the movie to Hollywood. We’re curious to see what will take over the location of the old Tribute Store.

There’s a lot happening around the new Villain-Con Minion Blast. Just over the construction walls, we can see the villain posters are covered in paper to protect them during painting.

Universal Studios Florida is having a small New Year’s Eve celebration, so trusses and lighting have gone up around the Music Plaza stage.

The park is packed today. There was an 80 minute wait for Transformers, and there was a lot of extra queue set up. The minion trying to escape over the construction wall has the right idea.

Steel support beams have appeared along the back of the Minions Cafe in the space where the Shrek and Donkey meet and greet used to be. We haven’t been able to see much happening here lately, and the interior looks pretty empty, so this was exciting to spot.

Caption this photo! This reminds me of the scene from Pirates of the Caribbean. Wrong park, I know.

If you hurry, you may be able to get a Dufftoberfest from Springfield. This is only temporary until they run out, so make sure you run if you want to enjoy Dufftoberfest one more time before next season.

There’s a big line for big donuts. The parks have been very crowded today, but the food lines haven’t been too bad.

Wait times for rides have been very high. The popular rides are all over an hour, including E.T. Adventure. There was a 75 minute wait, and even the Express line looked long.

New The Simpsons x Cakeworthy apparel can be found around the park and in CityWalk. The Kwik-E-Mart and Hello Kitty Shop sell this collection inside the park.

Grinchmas and the Who-liday season are almost over, but Seuss Landing is packed. Islands of Adventure feels much more crowded than Universal Studios Florida, thanks to the nice weather.

The ultimate goal of this visit to Seuss Landing was to get some Grinch cookies before they’re gone for the season. The line was long, so we decided to skip it. (Don’t worry, I went back later and got my cookies when the line was shorter.)

Inside Honeydukes, there are some new kitchen items for the collection. We really like all the new Wizarding World merchandise arriving lately.

The Wizarding World was packed, but it didn’t feel too crazy, thanks to all the crowd control in the area. The barricades might not be pretty to look at, but they do assist the Team Members in keeping the crowd flow at some of the choke points.

Hagrid’s Magical Creatures Motorbike Adventure had a 150 minute wait, but VelociCoaster wasn’t too far off with a 120 minute wait.

Skull Island: Reign of Kong was delayed when we passed by, but there was a very large crowd gathered around the entrance waiting for it to reopen. We’re looking forward to the crowds slowing down after the holidays.

We’re going to get out of here, but we’ll be back again to celebrate New Year’s Eve. Thanks for joining us around the parks today. Happy New Year, and stay tuned for more updates!