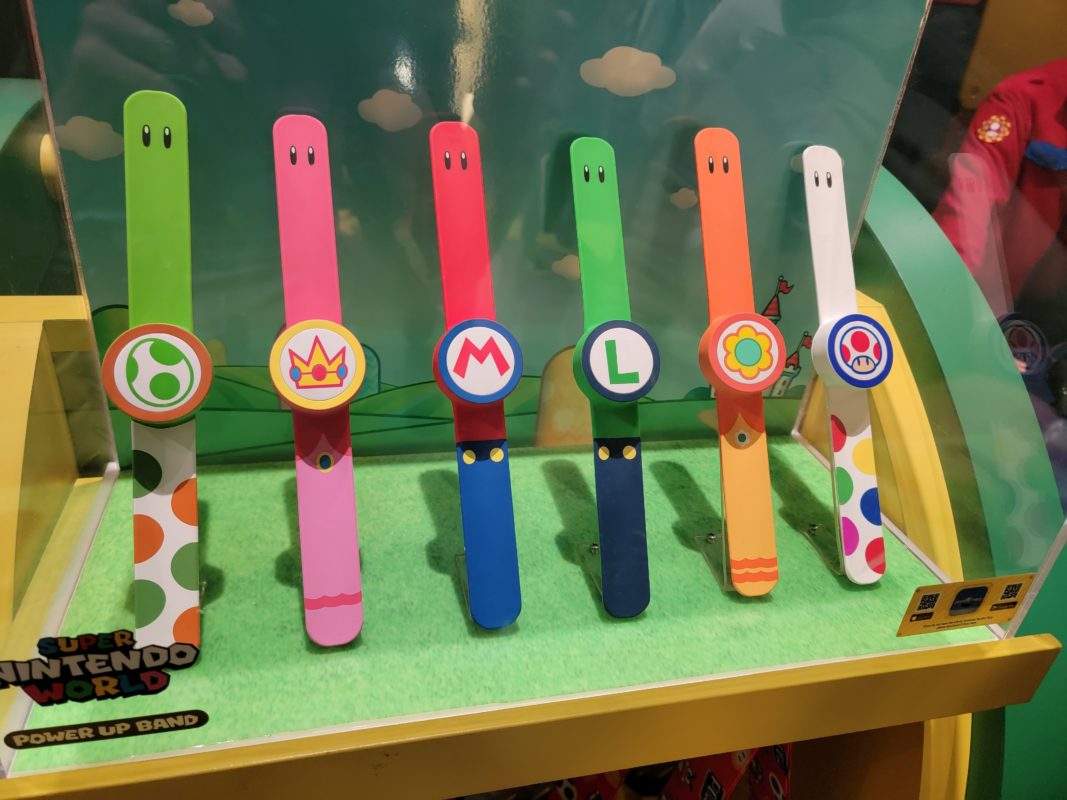 Just like at Universal Studios Japan, there are six Power-Up Band designs available — Mario, Luigi, Peach, Daisy, Yoshi, and Toad. Each band is a large plastic puck encased in rubber and attached to a slap band, making it easy to attach for both kids and adults.

Power-Up Bands are available for purchase at special vending machine kiosks located near the Piranha Plant Nap Mishap game. If you have a band from visiting Universal Studios Japan, it will also work here in Hollywood.

In case issues arise, Team Members are on hand to help.

Bands cost $40. Payment is available via credit card or tap-compatible methods like Apple Pay. If you need to use cash, you can visit 1-Up Factory to purchase a band.

While we went for the classic Mario look in Japan, for Hollywood we chose Princess Peach.

Her band is light pink at the bottom with a blue and yellow oval to symbolize the jewel on her dress. The puck is yellow-bordered with her crown set at the middle.

Mario’s resembles his classic look, with red on the top and blue on the bottom with two yellow dots to symbolize his overalls. The puck is blue-bordered with a red M in the center, just like his cap.

Luigi also takes the same inspiration, with a green top and dark blue bottom with two yellow dots to symbolize his shirt and overalls. The puck border is dark blue with a green L at the center.

Yoshi’s band is a bit more creative, with a green top and white with green and orange polka dots on the bottom. The puck is bordered in orange with a Yoshi egg at the center.

Toad’s band is all white on the top, and white with multicolor dots on the bottom to symbolize different colors of Toad. The puck is bordered in dark blue with a cartoonish Toad at the center.

And finally, Daisy takes inspiration from Peach’s band, with an orange top and light orange on the bottom with her signature daisy-shaped jewel. The puck is bordered in dark orange with the daisy jewel at the center.

On the back of the band is a unique QR code (which we will not show for security reasons). You can scan the QR code in your Universal Studios Hollywood App (available on iOS or Android) to link your band.

You can access the Super Nintendo World menu via the home screen on the Universal Studios Hollywood app.

The app will prompt you right away to scan your Power-Up Band if you don’t have one already.

Once you have it scanned, your character will appear at the center.

Your band’s character also determines which team you are on. The teams rotate out trying to collect coins over a certain period of time.

You can also see where you rank among all-time players, for today, and how you rank for today’s scores on Mario Kart and the Bowser Jr. Shadow Showdown.

And you can keep track of your latest achievements and collectibles via the bell in the top right corner.

To learn more about the games you play with the bands, check out our full guide to the Key Challenges! And let us know which Power-Up Band you chose in the comments below.