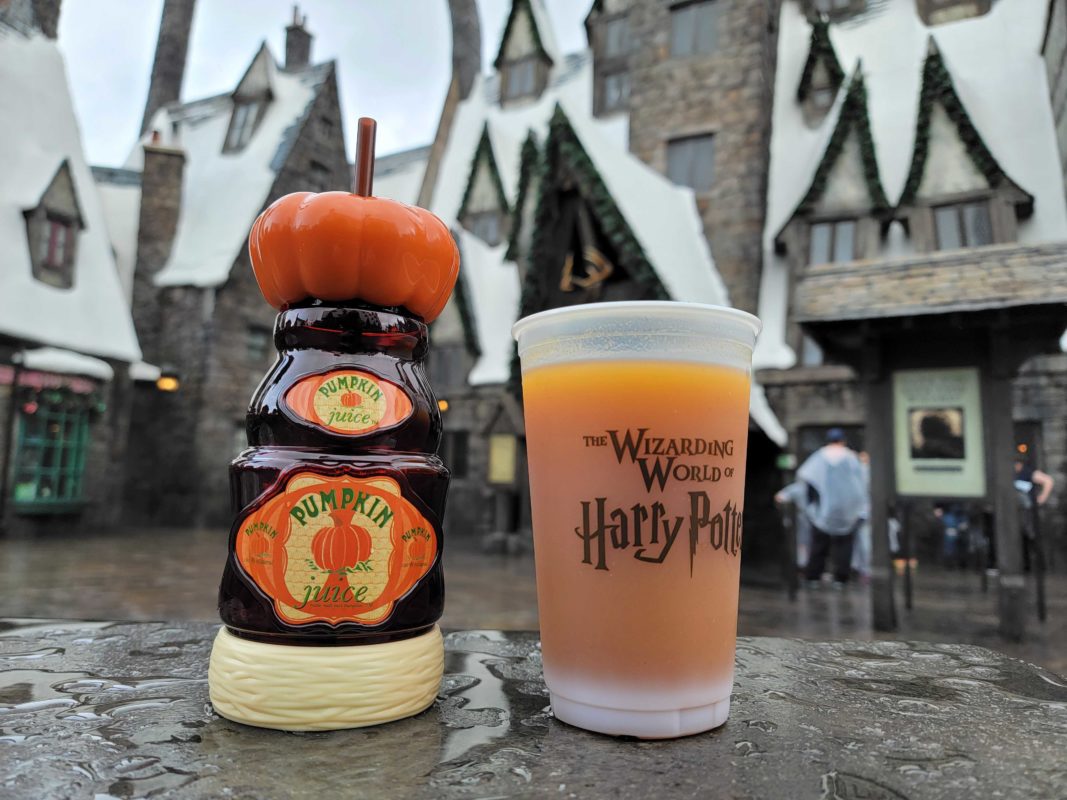 Although a little wider than the bottle, this pumpkin juice sipper has all the hallmarks of the original bottle. The lid is the signature pumpkin that was originally the cover for the bottle cap. The main section of the bottle is dark brown, and a wicker-like design is found on the base.

The labels on this pumpkin sipper are near copies of the original bottle labels, with a small “Pumpkin Juice” label on the neck of the bottle and a large label on the front.

The sippers are displayed without a straw, but a plastic one will be included at the register during the time of purchase.

Refills are available for $4.29, which saves around $0.46 including tax in perpetuity. Unlike most sippers or popcorn buckets, the refill price is available in perpetuity after purchase, which can lead to some nice savings over time if you’re a big pumpkin juice drinker. Just show your sipper at The Three Broomsticks for your refill.

In 2020, we reported that bottled pumpkin juice was no longer available for sale over in Orlando and Japan. The reason for this was unclear, but it was speculated that there may have been production issues or that the company that manufactured the bottles had gone out of business. This meant that pumpkin juice could no longer be purchased in its traditional bottled form, although it was still available on tap. This caused some disappointment among fans of the drink, who were used to enjoying it in its bottled form.

For those muggles not familiar with pumpkin juice — it’s a popular drink in the Wizarding World, particularly among the students at Hogwarts School of Witchcraft and Wizardry. It was featured in every Harry Potter film. According to the story, Pumpkin Juice was manufactured by London Pumpkins & Sons. It was also available on the Hogwarts Express and was drunk on any occasion, such as for breakfast, lunch, feasts, and other special events.

Are you excited about the Pumpkin Juice bottle souvenir sipper? Let us know in the comments below.

Stones Added to Bowser's Castle During Construction of Super Nintendo World at Universal Studios Hol...June 6, 2022
VIDEO: Universal Orlando Resort Gives a Sneak Peek at Some of the Food and Drinks Coming to Mardi Gr...January 27, 2022
Team Member Test Rides for Revenge of the Mummy Begin Today at Universal Studios FloridaAugust 13, 2022