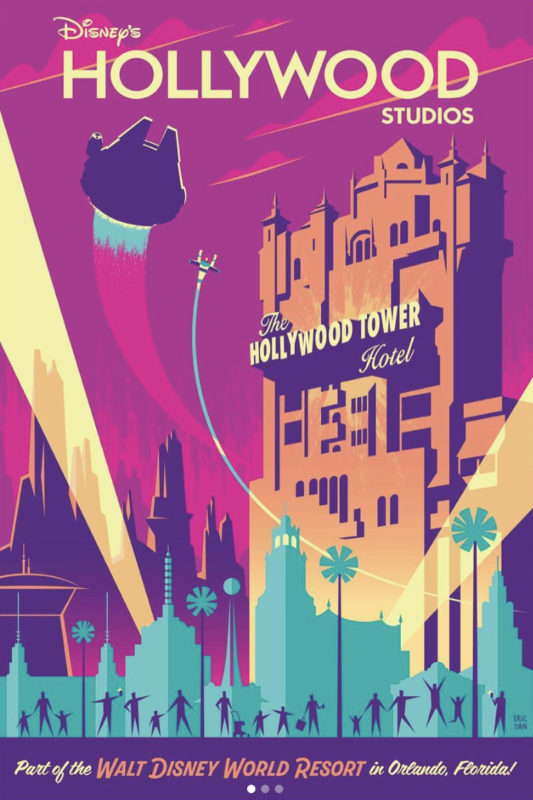 Artist Eric Tan will be appearing at the 2023 EPCOT International Festival of the Arts with four new prints. He shared the third of his series, a tribute to Disney’s Hollywood Studios, on Instagram.

Tan wrote, “Here’s the 3rd of 4 original prints debuting at the EPCOT International Festival of the Arts. I was most excited about tackling Hollywood Studios with all of the amazing Art Deco architecture and the organic contrast that the spires of Galaxies Edge would bring. The Tower of Terror looms large above everything at the Park so that became the focal point, similar to the Tree of Life and Spaceship Earth in the previous posts. Each of the 4 prints captures a specific time of day as well. While it’s impossible to represent every attraction at the Park, I had to give love to Toy Story Land with the tiny Buzz flying around. I had so much fun working on this series and I hope to see some of you at the Festival!”

While the piece’s focal point is The Hollywood Tower Hotel, there are plenty of references to other attractions and park icons. The Millennium Falcon speeds through the air, along with Buzz Lightyear! The skyline of Batuu from Star Wars: Galaxy’s Edge can also be seen.

Tan also shared a concept sketch for the piece.

Eric Tan is perhaps best known to Disney fans for his limited-release EPCOT attraction and pavilion posters that were released on shopDisney throughout 2020 and 2021.

Tan will be appearing in the Odyssey Pavilion in EPCOT at the following dates and times:

Check out the full artist appearance schedule for the 2023 EPCOT International Festival of the Arts.

You can also check out a preview of the EPCOT print Eric Tan created here.