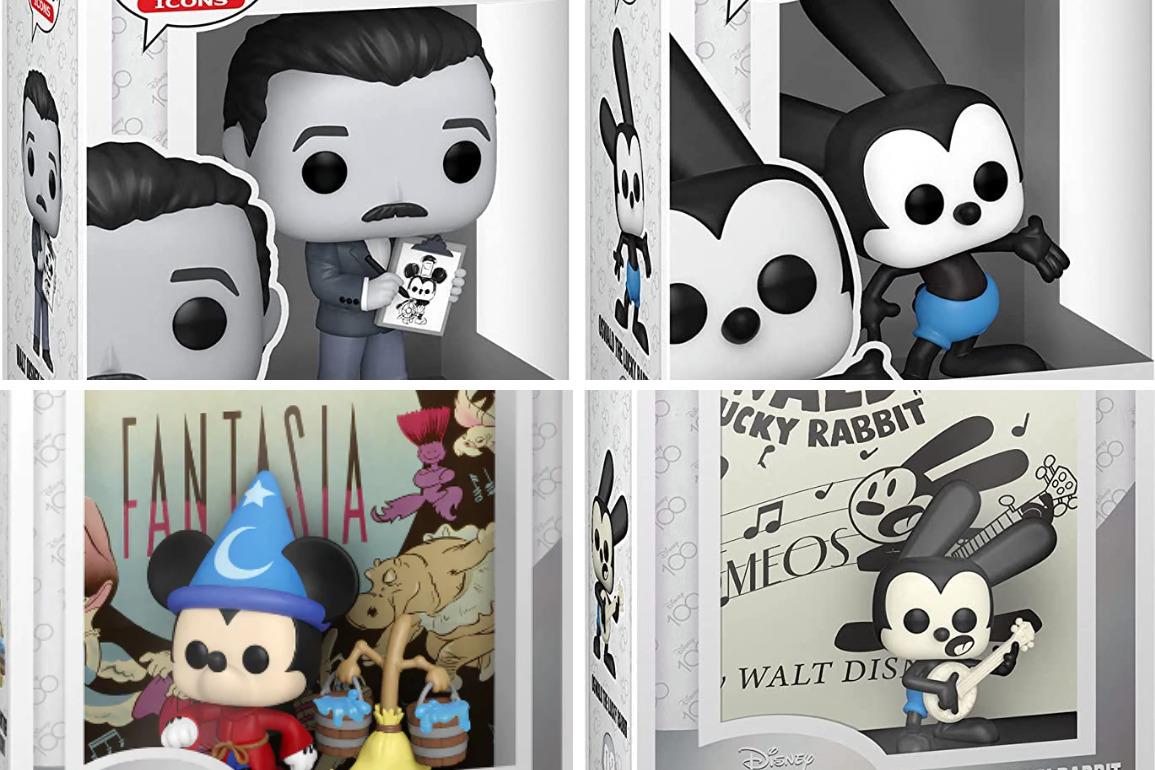 We recently got a preview of the Disney100 Funko POP! vinyl figures coming soon for the 100th anniversary of The Walt Disney Company. Now, release dates have been announced, and more figures have been revealed. Some are available for pre-order as well.

Funko POP! is celebrating the 100th anniversary of The Walt Disney Company with a couple of figures dedicated to Oswald the Lucky Rabbit. This version is an Art Cover figure where Oswald is attached to the base with a “Rival Romeos” poster behind him.

It comes with a clear case for displaying the figure and artwork.

Oswald is posed as he is on the art, playing and singing a song.

Pre-order is available through Amazon, and the release date is June 3, 2023.

The other vinyl figure is a normal POP! featuring Oswald standing with his hand extended. He wears blue shorts.

This figure has a chaser, which means you may randomly receive a variant instead of the above figure.

Pre-orders are available now at Amazon with a release date of May 10, 2023.

There will also be an Oswald the Lucky Rabbit SODA figure, but photos and details are not available yet.

The Movie Poster Funko features vinyl figures of Snow White, rabbits, and a squirrel, against the backdrop of the classic poster.

Like the art cover version, Movie Poster Pop! figures are adhered to the backdrop to ensure scene integrity and ease of display. They come with a case, and the figures are attached to the base.

A pre-order is available through Entertainment Earth, with the release scheduled for February 2023. An exact date has not been announced.

A movie poster figure featuring “Fantasia” is also coming soon. Against the classic poster are vinyl figures of Sorcerer Mickey and one of the enchanted brooms bearing buckets.

A pre-order is available through Entertainment Earth, with the release scheduled for February 2023. An exact date has not been announced.

The back of the box shows the photo that inspired the figure.

The Walt Disney vinyl figure was released today, but is currently sold out.

This is a Walmart exclusive and is available for pre-order. It will be released on May 6, 2023.

The newest Mickey Mouse vinyl figure is split, with one half done in the classic grayscale style and the other half in a colorful modern style.

This pop vinyl will be a Hot Topic exclusive. The release date and price are currently unknown. The above photo comes courtesy of a preview on HotStuff4Geeks.com.

A Disney100 Goofy Funko POP! vinyl figure will be released as a Target exclusive. The release date and price are unknown for the Goofy figure, and the Donald figure below.

Which Disney100 Funko POP! figures will you add to your collection? Let us know in the comments.