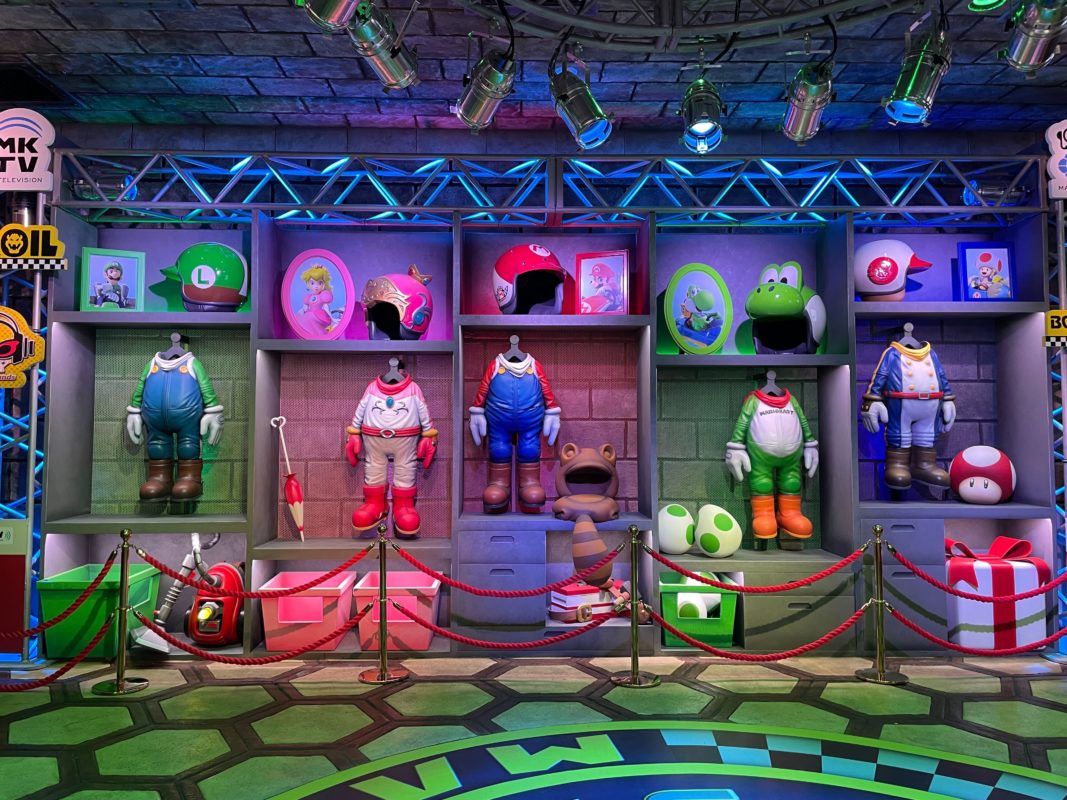 Super Nintendo World has soft opened for technical rehearsals at Universal Studios Hollywood, and the highlight of the land is of course its attraction — Mario Kart: Bowser’s Challenge. We already took you for a ride, but now let’s take a more in-depth look at the ride, including its queue.

Guests enter Mario Kart: Bowser’s Challenge through a pipe near Bowser’s Castle, below Mount Beanpole. As you look up, you’ll see several animated figures. The stack of Goombas, shell, Thwomps, Piranha Plant, and Yoshi are all moving, making the world come to life!

At the entrance, smaller guests can check their height. The minimum height requirement to ride is 40 inches.

Inside, there’s a test seat to try before riding. It’s a very deep seat with a slight step down into the vehicle. The lap bar pulls down and needs to fit securely.

There is a single rider line entrance located by the test seat at the entrance. It was closed during technical rehearsals, but this will be an option in the future, as it is in Japan.

Racers start with a stroll through Yoshi’s Island, which features scenery themed to the spin-off series of the same name. There’s both new and reused elements from the Yoshi’s Adventure queue at Universal Studios Japan, but the music is the same.

The entrance is pretty and pink with an apple tree, Yoshi egg, coins, and more. The extended queue also carries over this theme from Yoshi’s Island, but before you get to that portion of the queue, you’ll enter the caves.

An underground cave system at Yoshi’s Island resembles levels like “The Cave of Chomp Rock” and “The Cave of Harry Hedgehog.” There are colorful crystals and diamonds sticking out from the walls and glowing mushrooms growing throughout. Everything has a beautiful glow to it.

Once you go through the caves and up the stairs, you’ll reach the entrance to Bowser’s Castle. There’s some winding outdoor queue with a beautiful view out over the entire land.

Stepping into Bowser’s Castle reveals the stone statue of the great King Koopa.

His figure is imposing for all guests to the castle.

His evil logo is emblazoned on the wall.

Along the queue sit various trophies from the Mario Kart series. Here we see the Mushroom Cup, the Banana Cup, and the Shell Cup.

The Leaf Cup and Special Cup are also on display.

Tucked between the Blocks is the Star Cup.

But we’re fighting for the Universal cup! This is Universal Studios, after all. (Universal, if you’re reading this, please sell replicas of this cup.)

Bowser’s challenge letter hangs on the wall with the Universal plaque and a photo of the two rivals. It says, “Hey Mario! I challenge you to a race! Come to my castle! And don’t chicken out! Gwahaha!”

Entering Bowser’s library, we see Boos on the walls. Fun books are around them, too, including “A Brief History of MooMoo Meadow,” “The Secret Paths of Warp Pipes,” “Battle Mode for Beginners,” and “Bill’s A Comin!” A sticky note on Bowser’s desk reads “To do: WORK!”

In his library is of course a great throne, where Bowser keeps a photo of Princess Peach to admire.

Bowser’s hard at work strategizing for this race. He wants to make sure he wins!

He’s even out studying Rainbow Road, the Mario Kart 8 version in particular.

The work table in the center has a large, horned magnifying glass. On the table is a small model of the challenge track.

The model truly looks handmade. The pieces are made to look like corrugated cardboard and paper.

Each of the Koopalings are represented as well as various enemies like Thwomps, Chain Chomps, and Piranha Plants.

The Mario characters are seen in their Super Nintendo-era art style.

A model hangs above with King Boo, Kamek, an airship, and the Gateway Galaxy asteroid from the first level of Super Mario Galaxy.

On his desk is a large Piranha Plant figure (which we would also love to see sold) as well as a concept drawing of a Mechakoopa. A blueprint hangs to the left of the desk, and other concept drawings (including a fairly accurate one of the ride course) hang above.

There’s so many wonderful physical props in this queue.

The factory room shows how some of Bowser’s minions, like Bob-Ombs and Mechakoopas, are created. We also see crates of Bob-Ombs already finished along with Bullet Bills.

Screens along the way depict Bob-Ombs under construction.

Guests are then directed into a room with tons of monitors, almost as if they’re in a broadcasting center.

Control screens show various courses, all from Mario Kart 8. Courses include N64 Rainbow Road, Twisted Mansion, GBA Mario Circuit, and Cloudtop Cruise, all of which are represented in the ride. Not all of these courses make appearances, of course.

In the first pre-show room, a video shows you how to put on the visor headset and adjust it. You’ll also see the different characters from Team Mario and Team Bowser.

The most significant feature of the second room is the racing suit shelves, which contain iconic props for each character in the race.

Luigi has his Poltergust 3000 from the Luigi’s Mansion series, for example.

Mario also has a Tanooki Suit at the ready!

A large seal on the floor depicts the Universal Cup. In this room, guests are taught how to play the actual game.

Now, it’s time to pick up your visor! You’ll wear the visor on your head and use the white knob on the back to tighten or loosen the headset. Make sure it fits snug, because you’ll be attaching AR goggles once you board the vehicle.

The AR goggles really make the whole experience, but if you want to opt out, just ask for a “no visor” card. This is an option for those that might not be comfortable wearing something on their head or over their face. You can watch our videos below with and without the goggles to see the difference for yourself.

Mechakoopas and Bob-Ombs like those we saw being manufactured in the factory room sit stationery on the conveyor belt above guests. Banners for each of the Kooaplings hang below.

Head down the stairs with your headset and get ready to challenge Team Bowser. Next stop is the load platform!

The load platform is double-sided for a higher capacity. There are vehicles loading on the right and left side of the station and each vehicle holds 4 riders. The back seats of the vehicle of raised higher than the front so that everyone has an unobstructed view during the ride. Every player has their own steering wheel with buttons to blast shells. The AR goggles are in the vehicle on the lap bar and connect to the visor headset.

This is a slow-moving dark ride that moves along a track, but combines show scenes, screen, and augmented reality to put you right into the game. You’ll collect shells as you race around the track and use the steering wheel to shoot. Look around at where you want to shoot to aim. Of course where else does a race begin but the starting line.

The first course takes guests through the plains, with Chain Chomps and Thwomps attacking drivers.

Next we move underwater, where Bowser throws a Blooper to temporarily blind racers before awakening the Fish Bones.

Next we move into Twisted Mansion from Mario Kart 8, where Magikoopas try to throw us off course.

Finally, we’re taken into the skies as in Cloudtop Cruise, also from Mario Kart 8.

But the good times don’t last, it’s on to Grumble Volcano from Mario Kart Wii where Bullet Bills are fired at us.

From the fires of the volcano comes a Bowser made of lava, which you shoot with shells to gain coins.

And finally, the climax — Rainbow Road! The most iconic (and rage-inducing) part of any Mario Kart game.

Watch our full queue tour and ride POV without AR video below.

And the full ride POV with AR is below.

Mickey & Minnie’s Runaway Railway at Disneyland Will Close During Fireworks