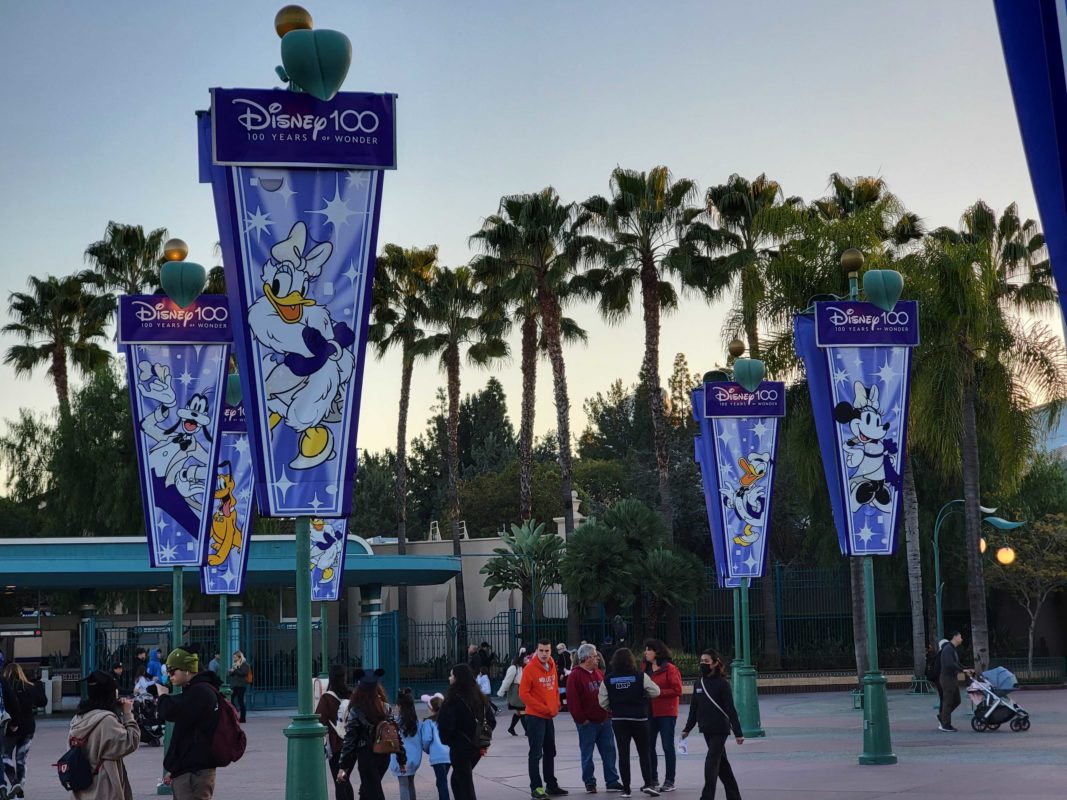 As the 100th Anniversary celebration is set to begin, new Disney100 banners are now hanging in the Disneyland Esplanade in preparation for the 100 Years of Wonder festivities.

The Disney100 pennants have been affixed to poles in the area between Disneyland Park and Disney California Adventure Park. As guests come and go between the two opposite parks, Mickey, Minnie, Donald, Daisy, Goofy, Pluto, and Chip ‘n’ Dale can all be seen donning their celebration costumes.

The characters, seen in their platinum and purple formal wear, stand out from the surrounding starbursts and sparkles on the purple flags.

The decor is also complimented by a new 100 Years of Wonder medallion we spotted today above the entrance to Disney California Adventure. Decoration is also on its way to the Downtown Disney District.

The 100th anniversary of the Walt Disney Company is this year of course, and the celebrations will begin at Disneyland on January 27, 2023. As part of the celebrations, Sleeping Beauty Castle will receive special decorations. Throughout the resort, guests will enjoy special limited-time offerings taking place all year long, including new platinum-infused decor, two new nighttime spectaculars — “Wondrous Journeys” and “World of Color: ONE,” new sparkling looks for Mickey Mouse, Minnie Mouse and their pals, special food and beverage offerings, merchandise, and more. To help kick off the celebration, the new Mickey & Minnie’s Runaway Railway also opens in Mickey’s Toontown on January 27.

PHOTOS, VIDEO: Full Tour of Mario Kart: Bowser’s Challenge, Ride Both With and Without AR at Universal Studios Hollywood

23 Artifacts Revealed for Disney100: The Exhibition in Philadelphia