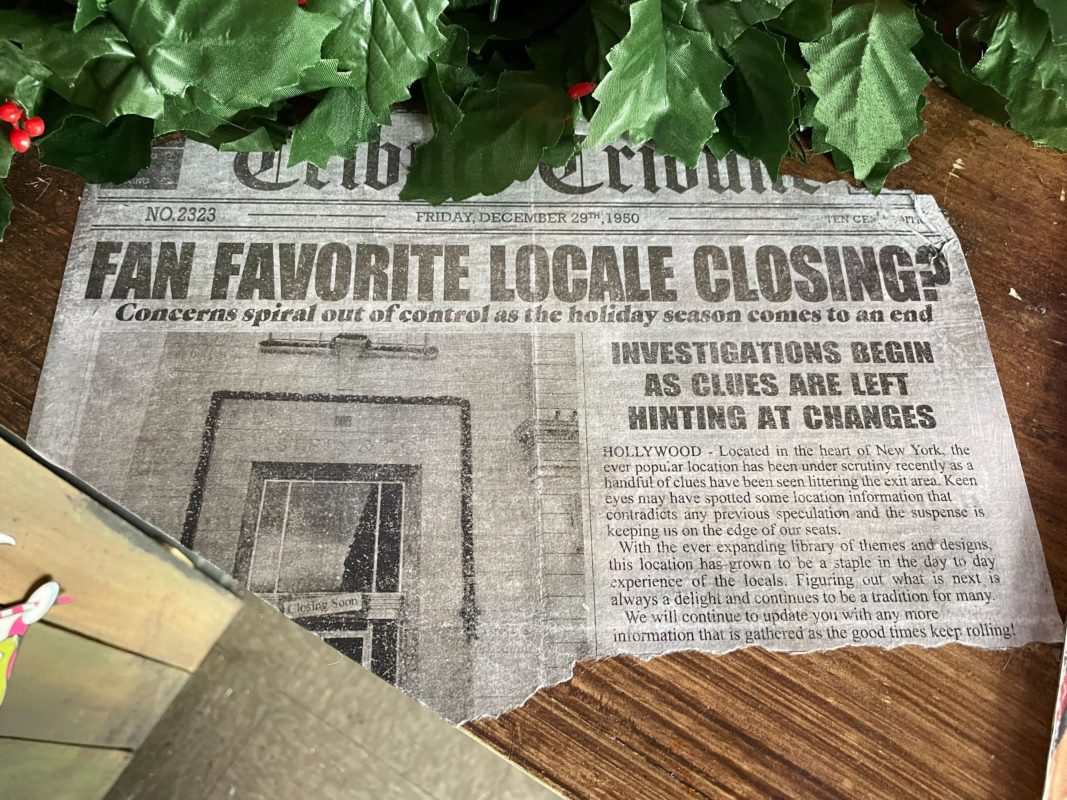 Universal has added another clue about the upcoming move for the seasonal Tribute Store in Universal Studios Florida. The store has been in the park’s New York area since its inception. The fake flyer added to the Tribute Store earlier this month was for a moving company that operates “from New York to Hollywood,” indicating it would be moving to the Hollywood area.

New to the Tribute Store’s final room is this “Tribute Tribune” newspaper clipping with the headline “Fan favorite locale closing?” The subtitle reads “Concerns spiral out of control as the holiday season comes to an end.”

There’s a picture of the Holiday Tribute Department Store façade with a “closing soon” sign above the door.

The article was written in Hollywood, supporting the rumor that the Hollywood area will be its new home. Another subtitle reads “Investigations begin as clues are left hinting at changes,” referencing the store’s own clues. Here’s what the full article says:

Located in the heart of New York, the ever popular location has been under scrutiny recently as a handful of clues have been seen littering the exit area. Keen eyes may have spotted some location information that contradicts any previous speculation and the suspense is keeping us on the edge of our seats.

With the ever expanding library of themes and designs, this location has grown to be a staple in the day to day experience of the locals. Figuring out what is next is always a delight and continues to be a tradition for many.

We will continue to update you with any more information that is gathered as the good times keep rolling!

The last line is a reference to “let the good times roll,” a phrase associated with Mardi Gras, which will be the next big celebration at Universal Orlando Resort. It seems the Mardi Gras Tribute Store will be in the new Hollywood location.

The most likely place for the new store in Hollywood would be in the space used by Williams of Hollywood, the Dark Room, and the UOAP Lounge.

The Williams of Hollywood Prop Shop closed in June, and The Dark Room announced its permanent closure a few months later. It was then announced that the adjacent UOAP Lounge would be moving, leaving three neighboring façades open for a spacious Tribute Store.

The current Tribute Store is in the old extended queue for Revenge of the Mummy, so it is possible the store is moving to give more queue space to the Mummy, but we hope that something bigger and better is coming. Stay tuned to Universal Parks News Today for more updates, and let us know in the comments what you think of the Tribute Store’s big move and if you’d like to see an Epic Universe Preview Center in the future!