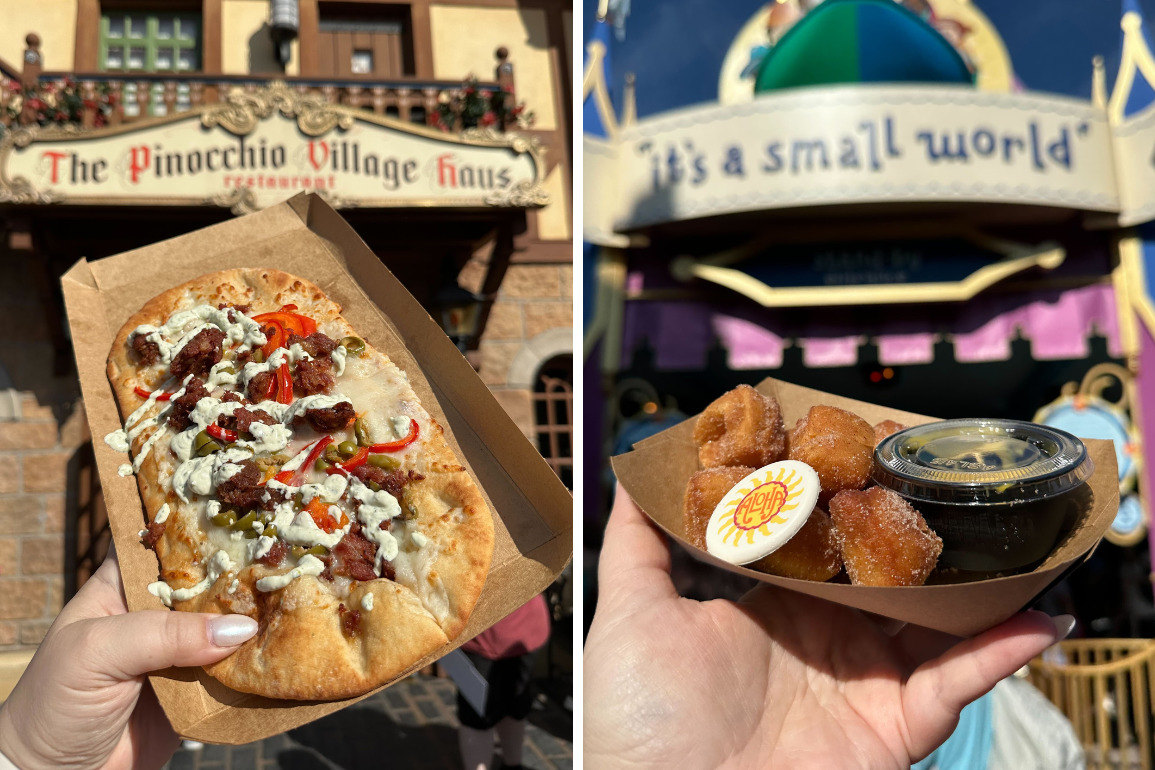 It’s no secret that the flatbread at Pinocchio Village Haus is not haute cuisine, and until now, the specialty 50th anniversary versions have been the same. The Berbere-Chickpea was passable, at least, but the Korean Short Rib and Croque Monsieur were incredibly salty; the best we could say of the Chicken Souvlaki was “it wasn’t terrible,” and that’s to say nothing of the “at least it was cooked all the way through” Roasted Street Corn flatbread.

So when we were checking out the new round of treats and found a Malasada dessert and a Chorizo flatbread, we were understandably trepidatious.

This was shockingly good. The crumbled chorizo is delicious. It has a crispy texture and has a nice kick of spice to it in just the right amount.

The cilantro lime sour cream pairs perfectly with this flatbread. It helps cool down the spice from the chorizo and balances the dish.

The crust is a typical flatbread you get here at Pinocchio’s but the toppings really make this dish. Red peppers and green olives finish off this dish and complement the chorizo. The red pepper provides a bit of crunch and the olives have a nice flavor.

We can’t believe we’re saying this, but we’ll come back to Pinocchio Village Haus for this again.

Traditional Malasada featuring flavors of Hawaii with a Mango-Coconut Sauce

We guess they had to have a bad dessert to bring balance to the Force. These tasted like they had been sitting out for a long time. Maybe if you got a fresh batch, they’d be better.

The Malasada itself is almost like cinnamon sugar mini donuts, but they really missed the mark on these. For such a simple dish, these should have been a hit.

The dipping sauce is not good. Admittedly, some of us aren’t coconut fans, but this is beyond overpowering. The white chocolate “Aloha” medallion adds nothing. Maybe we were served stale Malasada, but these aren’t worth your time or money.