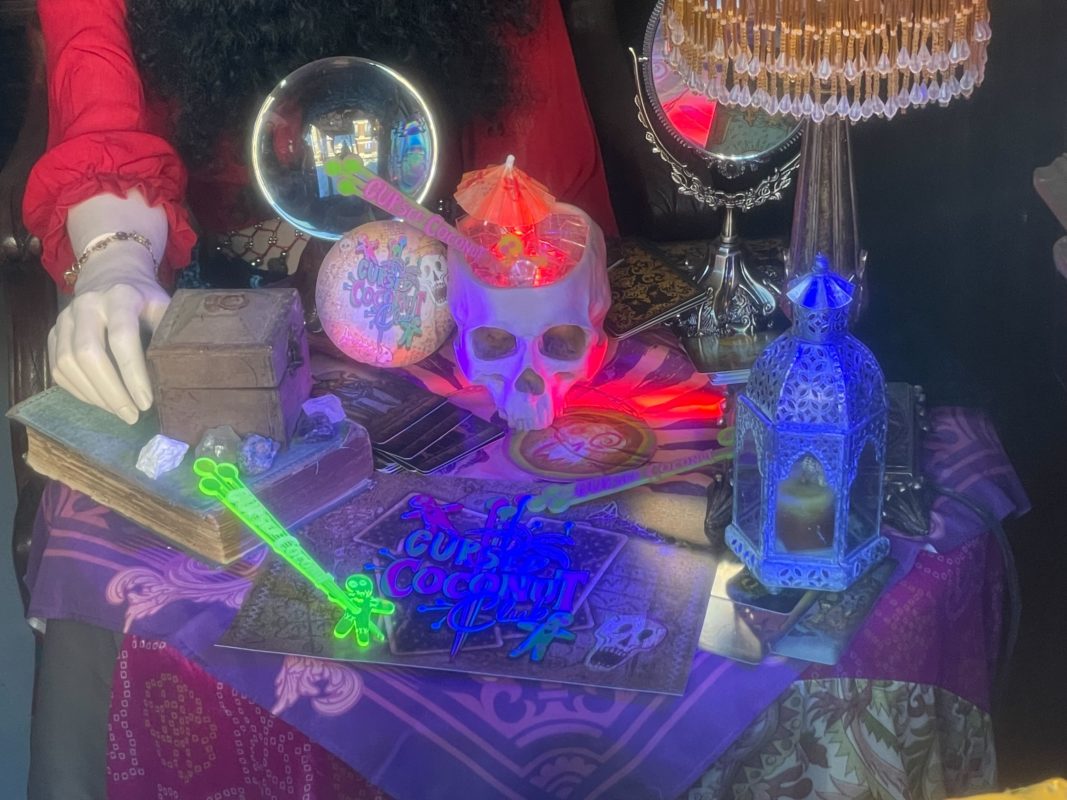 It looks like Universal Orlando Resort is about to get a new overlay for one of the most popular bars on property.

If you frequent Universal CityWalk, you have likely walked past the Red Coconut Club, one of the popular bar and eateries for guests. Ever since Halloween Horror Nights in 2022, we have started to see overlays occur at the Red Coconut Club, making the bar feel like an all-new experience that guests can enjoy. In 2022 we saw an all-new window set up at Universal Studios Florida by the Horror Make-Up Show, hinting at the first-ever overlay of the Dead Coconut Club. Then, one window in the New York section of the park had an Easter egg hinting at the layover of the Green & Red Coconut Club for the holiday season.

Now, a Mardi Gras theme layover is making an appearance in another window at Universal Orlando Resort. Madam Basiel’s window is located under Boris Shuster’s on the corner across from Film Vault and Transformers queue and inside that window, we can now see what looks to be the theme for the Cursed Coconut Club.

Now, we invite you to take a step into the first hints of the Cursed Coconut Club! This is the view from the window where we can see what looks to be a psychic at her table.

When we take a closer look, we can see lots of light-up neon and glow cubes will likely be used in the new overlay of the bar. The table also shows off the new “Cursed Coconut Club” coaster and what appears to be the back of the menu.

Here is a closer look at the Cursed Coconut Club logo which has lots of voo-doo-inspired themes, perfect for the Mardi Gras season. We can also see what appear to be new drink sticks and stirrers for upcoming cocktails!

While you are walking by, be sure to take a closer look into Madam Basiel’s window! As you can see in the photo below, if you are not paying attention, it may be an easy Easter egg to miss.

With so much Mardi Gras news coming from Universal Orlando Resort today, this window is just the cherry on top of our king cake! Universal’s Mardi Gras: International Flavors of Carnaval will begin on February 4th and will last until April 16th. Admission to the event is included in your theme park ticket, which means that offerings such as the parade, concert line-up, performers, and more are all included during your visit!

Speaking of the concert line-up, Universal has just released the 2023 Mardi Gras line-up! If you want to take the first peek, you can do so here! Universal Orlando Resort Mardi Gras Float Ride and Dine Experience tickets are also available, but there has been a big price increase. We have everything you need to know about this popular experience here. The Tribute Store will also be moving this Mardi Gras, and you need to know where Universal will be placing it! We have all the details of its new location here.

Send a Message from Somewhere Beyond with The Haunted Mansion Stationery Set, NEW at Walt Disney World