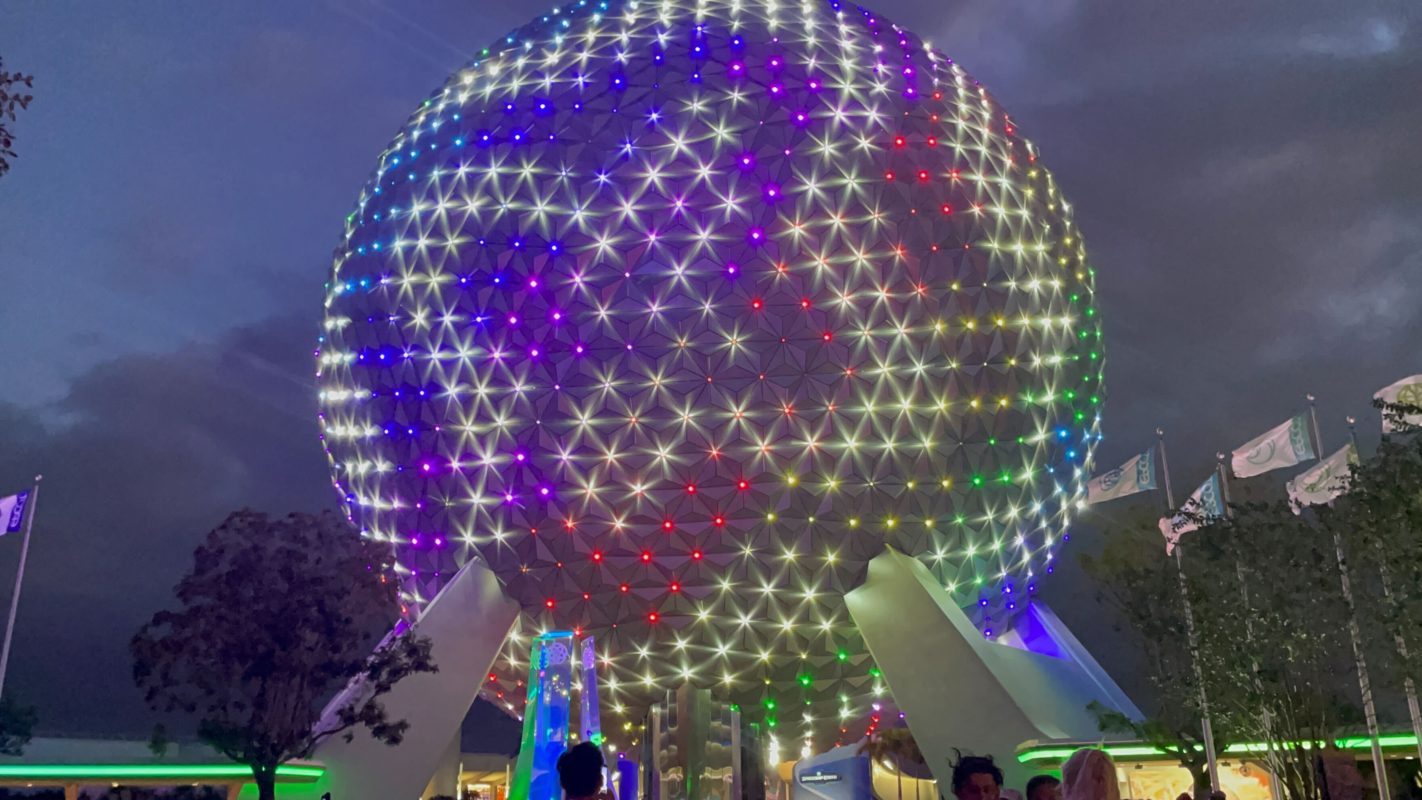 One little spark lit up for us tonight… or many sparks rather, as we enjoyed the new Figment-centric Beacon of Magic show as part of the 2023 EPCOT International Festival of the Arts! And the best part is you can enjoy the new show below, and read on for photos.

The new show uses audio from the original Journey into Imagination attraction, with Dreamfinder and Figment. It opens with the verse sung in the Art section of the classic ride, when the duo are painting a glass mural.

Hexagons of color then swirl around Spaceship Earth to different instrumental renditions of “One Little Spark” from the original attraction.

Eventually all of Spaceship Earth is covered in rainbows of purple, yellow, light blue, and dark blue with white starburst lights lit sporadically.

Eventually we move into the Performing section of the original attraction, with Figment and Dreamfinder singing as the lights flash in syncopation. The reds and whites evoke the red carpet and spotlights.

A strip of orange lights rotates around the now-purple sphere, Figment’s core colors of course.

The end of this show uses the finale music from the 1983 attraction.

Different rainbow and multicolor patterns flash around the sphere for the grand finale.

The new show follows the tradition of new Beacon of Magic shows debuting for every Festival at EPCOT since the 50th Anniversary began. Recently we’ve seen a “Frozen”-themed show for Festival of Holidays, a special EPCOT-themed show for the park’s 40th Anniversary, “Be Our Guest” taking center stage for the Food & Wine Festival, and more!

Last year’s EPCOT International Festival of the Arts saw a show themed to “Rainbow Connection,” the classic song from “The Muppet Movie.”

REVIEW: Refreshment Port Brings Back Gnocchi Poutine, Blood Orange Cosmo and More to Menu for the 2023 EPCOT International Festival of the Arts

2 thoughts on “VIDEO: Figment-Themed Beacon of Magic Show Debuts for 2023 EPCOT International Festival of the Arts”