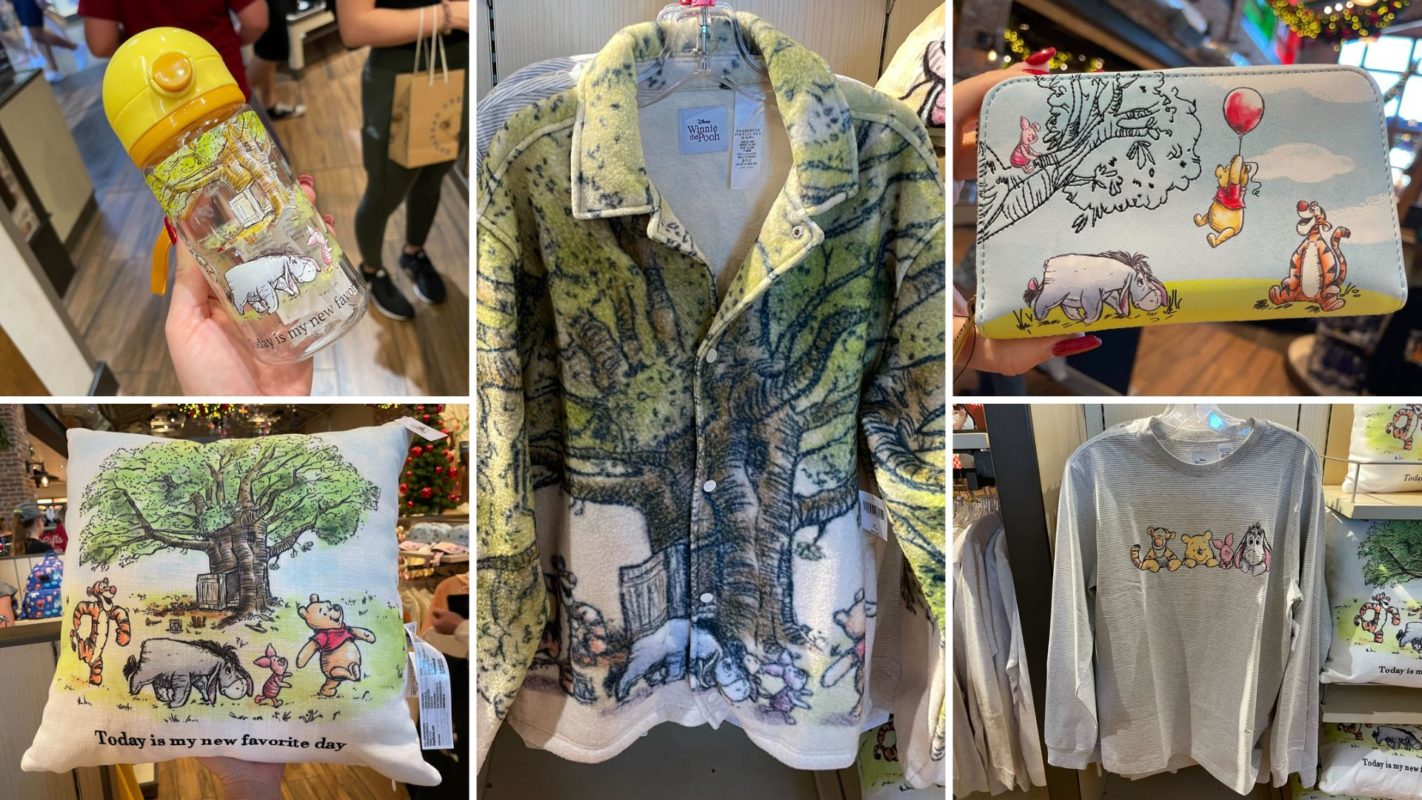 A new Winnie the Pooh Loungefly wallet and more merchandise featuring the silly old bear is available at Walt Disney World. We found these items at World of Disney in Disney Springs, and also found the wallet in Hundred Acre Goods at Magic Kingdom.

The front of the wallet features Pooh bear floating with a red balloon, Piglet in a tree, and Eeyore and Tigger on the ground.

A blue sky is behind them and the tree isn’t colored in, for a sketchy, hand-drawn appearance.

The other side of the wallet is dark blue and quilted.

The same image is patterned inside, behind solid light blue card slots.

On this throw pillow, Winnie the Pooh, Piglet, Eeyore, and Tigger march through the grass in front of a tree house.

“Today is my new favorite day” is printed along the bottom of the pillow.

The other side of the pillow is solid white.

This shirt has thin black and white stripes.

Tigger, Winnie the Pooh, Piglet, and Eeyore are smiling out from the center.

The throw blanket features Winnie the Pooh, Piglet, and Christopher Robin on a bridge looking down at a stream. It reads, “Without Pooh, the adventure would be impossible.”

This soft fleece jacket features the same image as the pillow.

The branches and leaves of the tree extend onto the sleeves.

It buttons up the front with white buttons.

It has pockets, too.

The image is repeated on the back.

Finally, the same image is on this otherwise transparent kid’s cup.

The cap is yellow and opens up to reveal a silicone straw.

It has a small yellow strap.

A Winnie the Pooh MagicBand+ is also available.

Not-So-Grand and Miraculous: Guest Gets Bumped by Wheelchair at Spaceship Earth, Waits at Exit for a Fight

PHOTOS: Full Menus With Prices Posted Ahead of 2023 EPCOT International Festival of the Arts