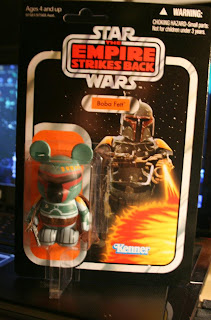 We saw Evilos tweet some pictures of his latest creation so we asked him about the project and his love of Star Wars.

“A lot of my work gravitates towards many things I enjoyed as a kid, Star Wars being one of them. Mickey in Carbonite was one of my early customs made before Star Wars Series One was even released by Disney. When I was a kid, I played with Star Wars figures all the time. Like most kids from my generation our youth revolved around toys, circa 1980’s. So being a Star Wars collector I’ve had a few of these card backs from Comic Con and thought to myself hey why not repackage these vinylmation into a vintage style looking toy. The challenge for me was finding custom made bubbles and cutting out a seamless spots for the ears to pop out of, so not to damage the overall look of the vinylmation. My early carded Star Wars customs, I needed to cut the ears down so they would fit. This drew most of the criticism from that series so I’m happy I was able to figure out how to keep the ears and still make it look like these were produced many years ago. 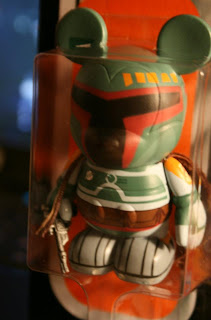 I most likely will be producing more of these and have some for trade. I would urge collectors who can make it to come out to the trading night at Disneyland Feb.16th to see these in person and maybe trade up for one. I have no real plans to sell these but I do have the Boba Fett up for auction at the moment, so If you want something unique I would ask fans to check it out:

Also check out other similar work by Evilos 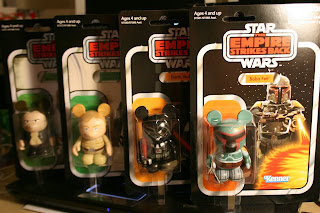 Previous
The Rescuers Fly into Vinylmation
Next
Roger Rabbit 9″ Vinylmation