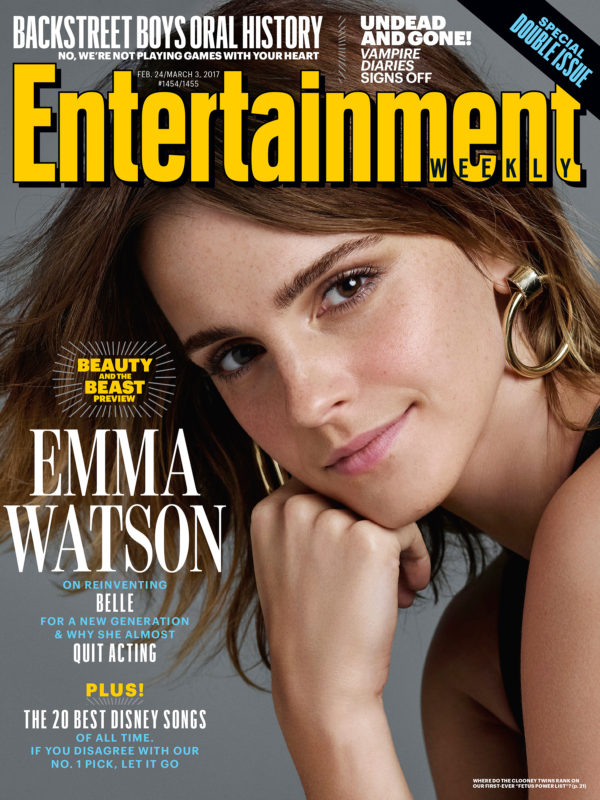 VIDEO: Emma Watson Talks Of How Belle Has Been Reinvented For “Beauty And The Beast”

In this week’s Entertainment Weekly, Emma Watson reveals  how she had some influence and input with reinventing the character of Belle. Definitely a big change that will make some fans of the original “Beauty And The Beast” very happy…. and some, not so much.

“I was like, ‘I have to tell this story. Oh my god if I don’t do this, nothing else makes sense,’” she recalls. “[It] made me feel that I had something else to give and offer.”

That’s how her version of Belle approaches the world, too. It may be a fairy tale, but it’s still a place where girls have to fight against impossible resistance for their own happily ever afters.

For instance, amid the chorus of villagers and shopkeepers in that opening song, you see a line of boys being led to school, while a group of little girls are left to do the laundry. Learning is not women’s work, and Belle’s neighbors no longer regard her simply as a quirky bookworm.

Her ideas and independence are considered worse than unladylike – they’re dangerous. Subversive. Beastly, even.

“They see her as a threat,” says director Bill Condon (Dreamgirls, Gods and Monsters). “It’s that thing that remains under the surface. But when there’s a real threat that unifies everybody, they start to look for other people who make them uncomfortable. That’s a pretty common pattern.”

This new danger: progress. This Belle is a tinker who invents a washing machine that frees the little girls from their chores, allowing her time to teach them how to read. The townsfolk respond first by marveling at her device – then by smashing it.

“They don’t think women should read and it goes further than that,” Watson says. “They are deeply suspicious of intelligence. Breaking the washing machine is symbolic of not just them breaking something she spent hours working on, but them really trying to break her spirit and trying to push her and mold her into a more ‘acceptable’ version of herself.”

In that way, Belle has already clashed with plenty of close-minded, brusque, bullies by the time she ends up in the clutches of the cursed Beast, (Downton Abbey’s Dan Stevens,) a prince who is living out anguished penance as a giant, hairy fiend in his castle full of living candelabras, clocks, and tea sets.