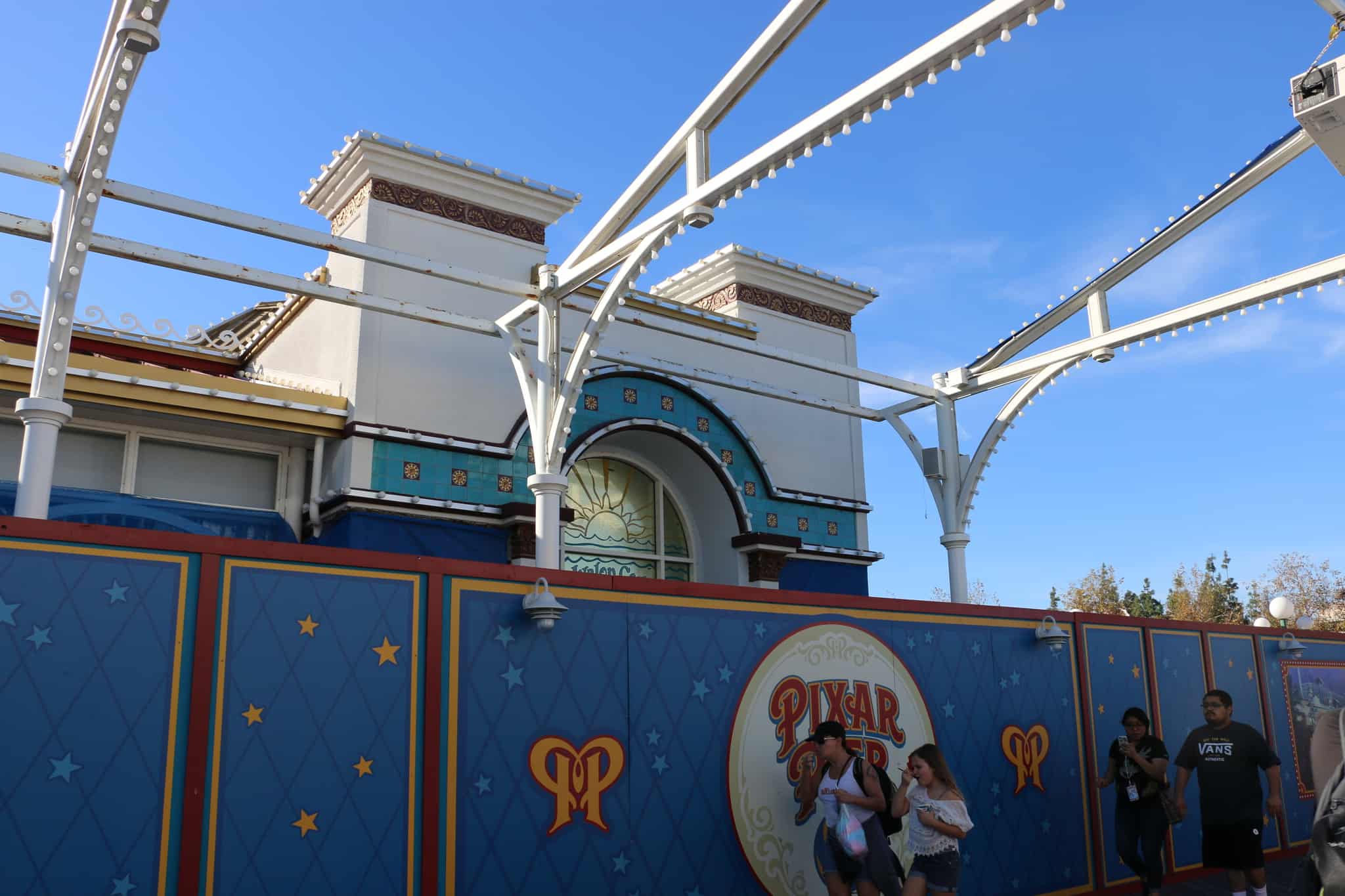 On the eve of the park’s 17th anniversary, we take a trip to Disney California Adventure at the Disneyland Resort…

Paradise Pier banners can still be found in the esplanade between Disney California Adventure and Disneyland.

Paradise Pier is still visible on this map on Buena Vista Street.

That looks like fun in the sun for everyone.

Rose Gold ears are back in stock! You can purchase these for $24.99 at many locations.

In Pacific Wharf, the Boudin Bakery Tour is seen closed and guarded by a cast member. Otherwise, annual pass holders would likely break in for some free bread.

Golden Vine Winery has gone under construction along with most of the park.

The Sonoma Terrace is still accessible during construction.

It has been a little more than a month since construction began to change Paradise Pier into what will be called PIXAR Pier.

Here we see the conversion of Ariel’s Grotto into a still-unnamed concept in the foreground, with California Screamin’ becoming the Incredicoaster in the background.

Here we see the scream tunnels being worked on, many of which will be enclosed and add scenic elements.

Mickey’s Fun wheel gondolas have been removed and the wheel itself is surrounded in a sea of scaffolding. The ride will return with PIXAr characters on the gondolas, but Mickey’s face remaining.

Before you reach the pier, this lovely sign can indicate how long standby is for Midway Mania. In the background, you can see that the Paradise Pier entry signage is all gone.

Across from Ariel’s Undersea Adventure, a Toy Story Midway Mania Fastpass Distribution site can be found (it would be kind of a pain to go all the way down there just to get a FastPass and then have to return again to ride, so this makes sense).

The spire and signage at the entrance to Treasures in Paradise is history.

Characters from many PIXAR films can be found on these walls.

Concept art of PIXAR Pier can be found on these walls, too.

This piece of art has been revised. The theater next to Bing Bong’s Sweet Stuff is now PIXAR Promenade. We’re not sure what will be inside now, but the new band act is featured outside in this art.

In removing Ariel’s Grotto, we can see that simple decals were used to cover the windows. Avalon Cove signage remains underneath, the last vestiges of the failed Wolfgang Puck restaurant that opened with the park.

The Cove Bar sign is still up as it will return for one last run in March.

Peeking through the transparent walls, you can’t really see anything unfortunately.

These people aren’t just standing around for nothing, they’re in line for Midway Mania. The construction walls create a dead end after the queue entrance.

The bathrooms are still be open for the time being.

As seen by concept art for Pixar Pier, King’s Triton’s Carousel will be transformed into a Toy Story carousel of some sort. This will close in March for the overhaul.

Over the construction walls, you can see the remains of the California Screamin’ signage.

Signs are posted along Paradise Pier (soon to be PIXAR Pier) for directions. What remains of the land is now Paradise Park.

The green army men at work patrolling the streets.

Goofy’s Sky School looks very popular after it’s been away under refurbishment.

To kick off the year right, DCA welcomed guests with Lunar New Year! This event offered specialty food and drinks, a Mulan and Mushu meet and greet, and of course, the star of it all, Pluto! Please feel free to click this link to find out the 9 reasons to visit Lunar New Year now through February 18th.

Complimentary face painting! I would take advantage of this opportunity while you still can!

The Redwood Creek Challenge Trail is also under refurbishment.

A peek through the walls…

What do you think of all the construction currently going on at California Adventure?